Without Indigenous leadership, attempts to stop the tide of destruction against nature will fail

Almost 200 countries are reckoning with the world’s extraordinary loss of the variety of life at the COP15 nature summit in Canada. Here’s why Indigenous involvement is crucial. 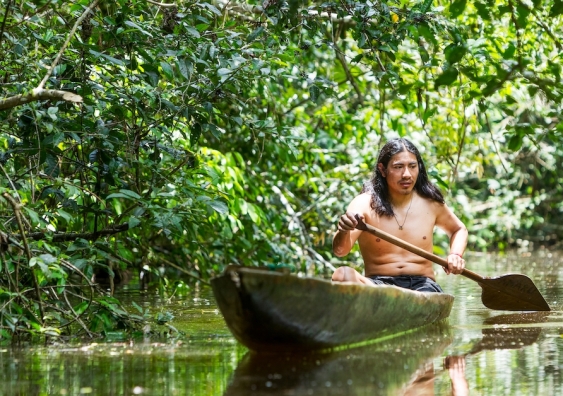 At the crucial COP15 nature summit in Canada, almost 200 countries are reckoning with the world’s extraordinary loss of the variety of life. Climate change, mining, urban development and more are threatening Earth’s biodiversity to an extent never before witnessed in human history.

The conference will see countries negotiate a global 2030 plan, called the Global Biodiversity Framework, to set worldwide targets for a range of issues, from establishing national parks to habitat destruction. The framework will hopefully be delivered by next Monday (19 December).

Despite comprising less than 5% of the global population, Indigenous peoples protect an estimated 80% of global biodiversity. Yet, the capacity of Indigenous peoples and local communities to continue to exercise this stewardship is being actively eroded across the world. Issues of power and inclusion in the current draft framework must therefore be resolved.

A 2019 study involving Australia, Brazil and Canada found total numbers of birds, mammals, amphibians and reptiles were highest on lands managed or co-managed by Indigenous communities.

Another study last year looked at tropical forests in Africa, central and South America and the Asia Pacific region. It found deforestation rates on Indigenous lands were between 17 and 26% lower on average, compared to unprotected tropical forests worldwide.

Yet, maintaining and expanding Indigenous forms of land management is threatened by other interests, such as mining, transport, energy production and distribution, and commodity production.

The former Bolsonaro administration’s attacks on Indigenous rights in Brazil is a clear example. There, the combination of human rights violations and unsustainable extraction led to murders, cultural erosion, and degradation of forest ecosystems.

Meanwhile, in the Pacific Islands, climate change reduces the capacity of local people to care for their ecosystems and threatens their livelihoods. For example, warming waters due to climate change will alter the breeding patterns and habitats of many coastal fish species.

Indigenous and local knowledge is key to ensuring the resilience of marine ecosystems in the Pacific in the face of global environmental change.

Resolving issues of power and inclusion

The Global Biodiversity Framework is important because, if concluded, it will set more than 20 worldwide targets for biodiversity.

One key target being negotiated is to protect 30% of land and sea by 2030, commonly referred to as the 30x30 Initiative.

Another addresses inclusion and participation, particularly as it relates to Indigenous peoples and local communities. This target exists thanks to efforts of the International Indigenous Forum on Biodiversity.

But considerable disagreement still surrounds the language of targets such as these.

In negotiated text, square brackets are placed around words on which countries do not yet agree. Much of the current text of the framework remains in brackets.

As we enter the final week of negotiations, the extent of remaining disagreement is deeply concerning. There is a risk that, even if the framework is concluded, it will include, at best, heavily watered down targets.

Indigenous representatives have raised significant concerns about the lack of language and perspectives of Indigenous peoples and local communities in the framework’s draft text.

The International Indigenous Forum on Biodiversity highlights issues with the negotiation process as well as the text itself.

For example, the 30x30 Initiative aims to use area-based conservation measures, such as protected areas or parks. Many Indigenous people are concerned about how this target could affect their rights.

Indigenous people worldwide have experienced exclusion from their ancestral homes, often in the name of “conservation” or under the guise of “wilderness”. The rationale is that it’s necessary to remove people and their practices to protect land and seascapes rich with diverse life.

For example, in South East Asia the traditional farming method of swidden cultivation has been banned or disincentivised as part of larger conservation programs, despite evidence that the practice supports livelihoods and ecosystem health.

Such exclusion of Indigenous people ignores their important roles over millenia securing and maintaining biodiversity over lands and seas for thousands of years.

The negotiation process makes it difficult for key voices to be heard. Large Ocean Island States of the Pacific – such as Fiji, Kiribati and Cook Islands – often have to negotiate as a bloc to ensure their voices and concerns are heard amid competing changes to framework text.

One, they can work with countries to negotiate on their behalf. Or two, they have to wait until all countries have had their turn to speak.

Waiting for other countries to speak can take a long time, often leading well into the night before Indigenous peoples and observers can speak and texts are accepted (if there is agreement).

There are positive signs

Encouragingly, Indigenous participation and influence in global environmental agreements has increased over time.

There are also positive signs from the High Ambition Coalition for Nature and People – an intergovernmental group of more than 100 countries. This coalition has increasingly shifted its position to acknowledge the people who help conserve nature as the negotiations have progressed.

But Indigenous representation at these forums, including voting for preferred text, remains vital. And Indigenous people’s rights must be reflected in the way targets are set. Different types of Indigenous conservation areas around the world must be recognised and, importantly, properly funded and resourced.

Also crucial is for all Pacific nations, including Australia and New Zealand, to ratify the Nagoya Protocol on Access and Benefit-sharing, which deals with the respect for and protection of Indigenous knowledge.

Unless rapid and transformative change occurs across societies and economies, we risk losing much of the variety of life. Indigenous leadership is fundamental to stop this from happening.