Despite challenging conditions, thousands of waterbirds breeding throughout NSW wetlands

With long-term monitoring of breeding events, UNSW researchers also identify trends and changes in the health of wetlands and rivers. 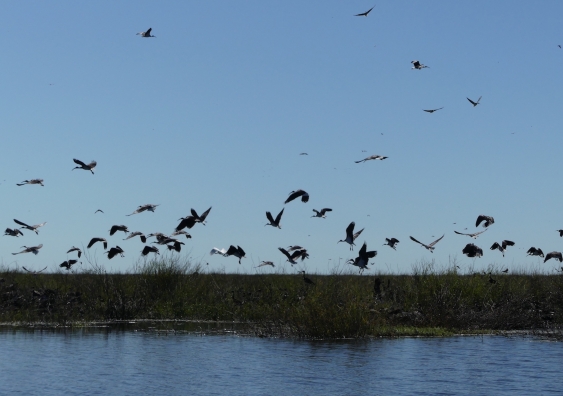 Recent flooding and water flow management in previous years have led to vast numbers of waterbirds, including large nesting colonies of Straw-necked Ibis and Royal Spoonbill, breeding at wetlands throughout the Northern and Central Murray Darling Basin (MDB).

Although several waterbird species require flooding to breed, the recent extreme floods, that are impacting humans and animals alike, saw large areas of nesting colonies in the MDB go underwater.

Researchers from the UNSW Sydney Centre for Ecosystem Science (UNSW-CES), however, have confirmed that many chicks managed to survive at the Booligal and Gayini wetlands in Southern NSW and the Narran Lake and Gwydir wetlands in Northern NSW, with some already taking flight.

Professor Richard Kingsford, Director of the Centre for Ecosystem Science said with waterbird populations declining significantly along eastern Australia over the past decades, successful breeding events like at Booligal and other wetlands in the Basin are essential if we are to see a slow in this decline, as is ongoing monitoring.

“Long-term data such as we collect as part of the annual Eastern Australia Waterbird Survey and the monitoring my team is doing on behalf of the Commonwealth Environmental Water Holder is essential to identifying trends and changes in the health of both wetlands and rivers.

“The environment is impacted by many factors, so accurate and current information is critical in informing decisions about water management to best protect these important habitats,” said Prof. Kingsford.

The Gayini Wetlands, an area of significant conservation importance, is a roughly 88,000-hectare property in the Lowbdigee Floodplain, the largest remaining area of wetlands in the Murrumbidgee in the southern Murray-Darling Basin.

The property is owned and managed by the Traditional Custodians of the land, the Nari Nari Tribal Council. Gayini, the Nari Nari word for water, is one of the largest wetland restoration projects in Australia and features a mix of environmental and Indigenous conservation and sustainable farming.

UNSW-CES, Senior Research Fellow, Dr Kate Brandis and her team are currently working on behalf of the Commonwealth Environmental Water Holder (CEWH), undertaking detailed monitoring of the current Murray-Darling Basin waterbird breeding events including studying the size of the colonies, reproductive successes and failures, and water depth and quality.

“My team, along with the NSW Department of Planning and Environment, will be monitoring Gayini, Booligal, and several other Murray Darling Basin wetlands, over the next six months.

“We’ll be looking at a range of factors including water depth fluctuations. Ensuring water levels don't rise too fast or drop too low is essential for seeing breeding events through to completion. If water levels rise too quickly, nests become flooded, and if water levels fall too quickly chicks are vulnerable to predators,” she said.

On recent visits, the research team have observed thousands of breeding pairs of Straw-necked Ibis and Royal Spoonbill.

The research findings provide the CEWH with essential information to make decisions about water flow management during breeding events to ensure the chicks have every chance of survival, as well as outside of breeding and flood events.

Along with a range of other factors, the collected data is used to ensure water for the environment is released or held back at the right times for the safety and benefit of people, towns, farms and animals.

The CEWH works closely with landholders, local communities, First Nations people and state governments, to deliver water when and where it is needed, while avoiding delivering water where it will exacerbate flooding.