Micro-aggressions are repeated acts that send women backwards. Here’s how micro-accommodations can fight back

Micro-accommodations are acts that seem small to those making them, but if repeated can have much larger positive consequences for those they target. 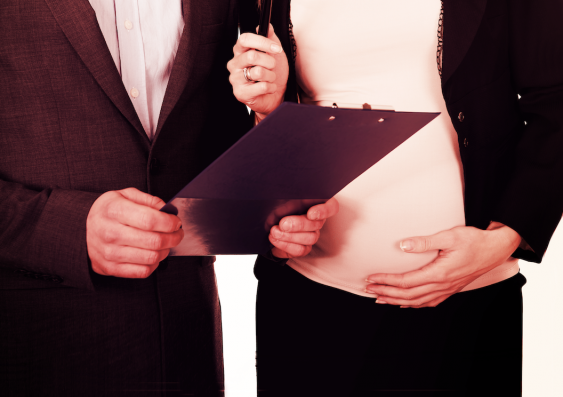 When I was ten, I was the only female member of an all-boys sports team, and the boys liked to remind me of it, and that it would be better if I just went home.

That was my introduction to sexism. And its logic was clear: you are not welcome, go home.

It is also how many of us used to think about racism and sexism – as involving big, conscious signals of hatred or exclusion.

We now understand discrimination as a more complex phenomenon, involving a mix of big and small, intentional and unthinking, acts. Racism can be a large “not welcome” sign, but it can also be a series of micro-aggressions that leave racial minorities feeling marginalised, stigmatised or emotionally exhausted from repeated attempts to claim their rightful place on the team or at the table.

Sexism can be telling women and girls to – literally – go home, or it can be merely forgetting to unlock the girls’ locker room or provide protective gear designed for female bodies.

Performed repeatedly, these small acts can have systematic consequences for the choices women make about their lives and their sense of where they belong.

These acts can also have broader ripple effects on those witnessing them or walking alongside those affected. They are one way racism and sexism become systemic – baked into our social and legal structures.

Laws hurt, but they can help

Our laws are another source of systemic bias. Among them are laws that penalise crack cocaine more heavily than its whiter, powdered equivalent.

But laws can also be an important counter to bias. They can give women and marginalised groups the right to enter domains for which they have been excluded and stay there.

They can, for example, require equal funding for male and female sports teams.

And they can even require employers and educational institutions to make accommodations that make staying in institutions and succeeding possible.

Among such laws are laws that require wheelchair access and Braille signage and paid sick and carer’s leave.

These are not cheap for employers and educational institutions, but they can make a big difference to the lives and employment chances of those they help.

But laws can’t do everything. That’s why employers, managers and co-workers need to go further and provide small but meaningful accommodations to individual employees to help them thrive, rather than just survive, at work.

Micro-accommodations can take the form of small scheduling adjustments. They might involve changing a start or finish time by a few minutes to accommodate school or daycare drop offs and pick ups, or short blocks in meeting calendars for parents to welcome their children home from school, or reordering presentations in meetings to allow people to arrive later or leave earlier.

Or they could involve providing short breaks for people to take prescribed medicines, or to briefly stretch to help manage injuries. 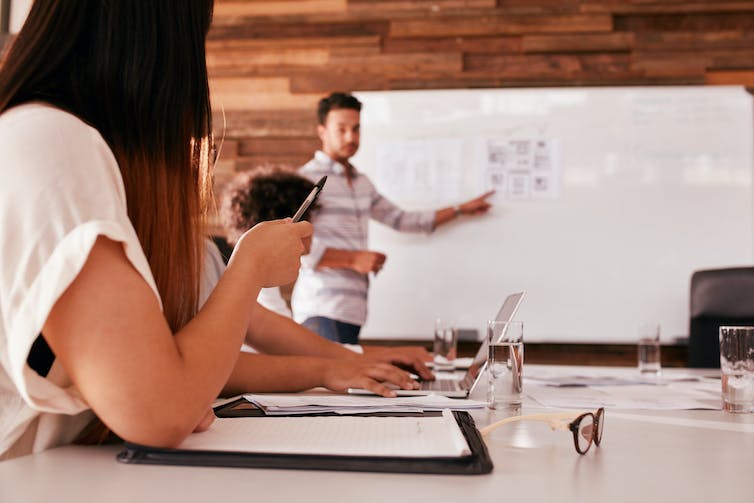 A micro-accommodation can be re-ordering a meeting. Shutterstock

For me, as an 11 year old in an all-boys sports team, micro-accommodations initially took the form of a scheduled break to allow me to access a far-away female bathroom, and later, an agreement among my team that I could have brief but exclusive use of the male locker room.

This made a big difference to my focus and batting average (it was baseball, in the United States) and more significantly to my sense that I had a place in the team.

That message of inclusion may not have erased the messages of past exclusions, but it definitely helped mute them.

In principle, micro-accommodations could take any form – so long as they go beyond what’s required by law, and impose only modest costs on those providing them.

Think of efforts by employers to provide halal, kosher, vegan or gluten-free menu options, or to provide proportional parking prices for those working part-time.

One of the most famous micro-accommodations in recent memory was documented by former Google and Facebook executive Sheryl Sandberg in her best-selling book, Lean In. 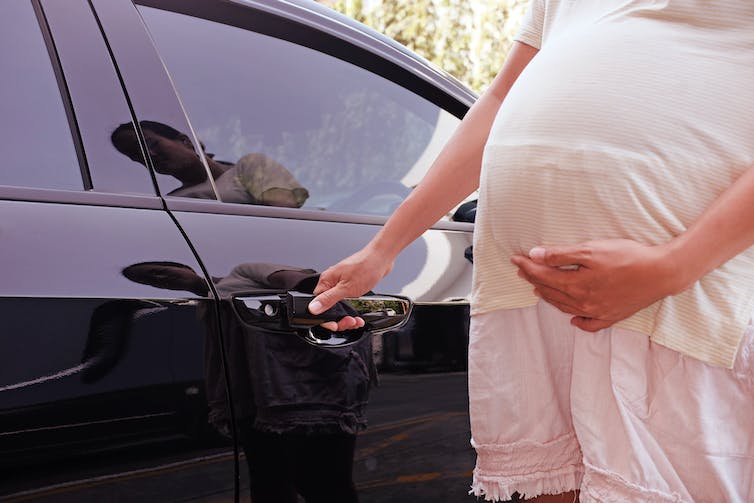 Pregnancy parking can be simply a matter of rearranging parking spaces. Shutterstock

Pregnant, late for a meeting, and only able to find a parking spot far from the front door of Google’s headquarters, Sandberg asked Google co-founder Sergey Brin for pregnancy parking closer to the door. He immediately said yes and said he wondered why the idea hadn’t occurred to him previously.

The cost was small: simply a matter of re-arranging parking spots rather than providing more. And the benefit to a pregnant Sandberg was huge. (If you don’t understand why, consider how hard it can be to walk quickly while heavily pregnant!)

Perhaps more important, it was a change that lasted well beyond Sandberg’s own pregnancies, benefited many other women at Google, and never became something they needed to negotiate each time they drove to the office.

There is certainly value in managers and co-workers responding to requests for accommodations beyond what the law requires.

But asking has costs – it can cause anxiety and stress, it can be exhausting, and it can re-reinforce “not belonging”.

My own experience attests to this. When I started university teaching in Australia with a small baby, I was told that my classes would be at night, but that I could ask a colleague if they would consider swapping with me, as an accommodation.

I was fortunate that a colleague was generous and agreed to swap. It was a sacrifice for him, but not a large one. But the act of asking felt awkward and stressful. I really needed my colleague to say yes, if I was to keep doing the job I loved.

The question I kept asking myself was why it had become my responsibility to make things work rather than my employer’s.

The good news is that I and others repeatedly made this point, and there is now a far better policy: all staff at my university are invited to complete a form indicating when they can and cannot teach, and any special circumstances. Those who do the timetabling take this into account.

And micro-accommodations are public rather than private – not something workers have to keep quiet or minimize.

Favours are private, micro-accommodations are public

Private favours and quiet forms of “personal workarounds”, which are communicated on a need-to-know basis have downsides.

They are less effective because well-meaning colleagues can misunderstand and undermine them, and they are unlikely to have larger, systemic benefits.

Not advertising a workaround means it is likely to stop at one person.

Here’s an example. One of my co-workers, Marian, trialled a personal workaround involving blocking out a short period in her calendar after her kids came home from school. Because she didn’t advertise it to her team, she kept receiving calls and urgent queries during this time.

We discussed the challenges, and I encouraged her to communicate the workaround to her team.

As soon as she did, the results were different. The blocked-out time was almost never interrupted, and she found it much easier to look forward to her kids arriving home and spending time with them.

Micro-accommodations are best when targeted to specific needs, as Marian’s was.

And they work best when they are initiated by managers, rather than employees. This takes an emotional load off workers and sends a powerful signal of inclusion.

Asking employees how best to accommodate their needs is one way to do it, but this still imposes an emotional responsibility on those being asked.

Another better way to do it is to informally audit facilities and schedules to see if they make sense for staff.

The resulting accommodations might be as simple as shifting important meetings and reporting deadlines away from major religious and school holidays.

Or making sure meetings don’t start at 9am or finish at 6pm if childcare centres opens at 9am and close at 6pm.

I help run a program that helps women (including transgender women) prepare to run for electoral office. Modelled on the Kennedy School of Government’s From Harvard Square to the Oval Office program, it trains a diverse mix of Australian women for electoral success.

And it pushes for changes that make it easier for them to stay in office once there.

One – already in place in the Australian Capital Territory – is family-friendly sitting hours, with sittings generally beginning at 10 am and adjourning by 7 pm. Queensland’s parliament and Brisbane City Council have similar arrangements.

Where this can’t happen, parties can agree not to schedule crucial votes at night, or during morning drop-off times.

While it shouldn’t only have to fall to female and diverse managers to offer micro-accommodations, they are in a good position to do so, even though the extra responsibility is weighty.

It is no accident that it was Sheryl Sandberg rather than Sergey Brin who pushed for pregnancy parking, or that it was female legislators saw the case for family-friendly sitting times.

But they are an important additional tool, one enlightened managers have the power and authority to use.