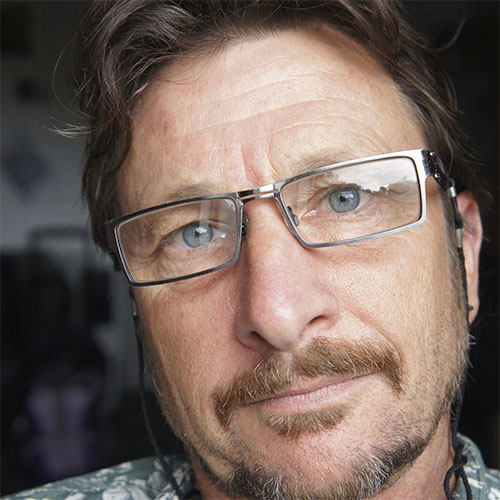 Director, Environmental Research Initiative for Art, School of Art
I have been described as a pioneer in, and one of Australia’s foremost proponents of, sustainable energy systems, electronic interconnectivity and interactivity embedded in the physical art object. I have worked with alternative energy systems in his sculpture and installation art for over twenty years.

My work has been shown at the Tate Modern UK, in Heidelberg and Rotterdam Town Halls, and numerous other venues internationally from Canada, Ireland and Finland to Greece and Bulgaria. I have completed two significant public commissions in Sydney, Weather Cranes (2006) at Newington Armory, Sydney Olympic Park and Earth v Sky (2012) in Bicentennial Park, Glebe. I have also completed several temporary public installations, including in Cobh, Co. Cork, Ireland; Chatham, Kent, UK; and Taranaki, Aotearoa New Zealand. In 2016 I completed a major tri-national installation, Sonic Wells for Gallipoli, which sonically linked Canakkale, Turkey, Wellington, NZ and Sydney, Australia. In 2019-20 I have been touring public sound installations to Perth/Sydney/South Coast NSW/Rotorua NZ/Taranaki NZ with more planed for 21.

My interest in solar power began in 1994 with a work titled Hours Remaining in the Life of Allan Giddy, reviewed in Leonardo Magazine Vol 2/98, MIT Press. This interest led me to curate two exhibitions at UNSW's Solar Research Centre (SOLARCH) in 1999 and 2002, and to win the 'Green Power Prize' at Sculpture by the Sea, Sydney in 2002 with his work Minor Attractor. The inclusion of solar power and energy efficiency is still a key driver in my practice to this day.

I have also curated Desert Equinox, Australia's first solar art exhibition, in Broken Hill (2012); La Lune: Energy Producing Art on Sydney's Northern Beaches (2014)—runner-up for two Australian Event Awards that year; and NOX Night Sculpture, Randwick (2015 and 2017), for which all works were created by my students at UNSW A&D. I have also co-curated two significant exhibitions in and around the Armory Gallery in Sydney's Olympic Park: Buffer Zone (2011) and WAR—A Playground Perspective (2016)—the largest exhibition event mounted by Sydney Olympic Park Authority. The most recent NOX event in 2021 attracted a Covid compliant 10200 people over 3 nights.

I currently lead ERIA (the Environmental Research Initiative for Art), UNSW A&D, specialising in the use of electrically motivated technologies and off grid power in public artwork. I have lead a team which has acquitted a major Australian Research Council linkage grant (2009-2013), secured by ERIA to advance the field.

Presently I am working on transportable solar and wind powered media systems to place sound in remote waterways in numerous sties in Australia and New Zealand. Funded by grants secured from Creative New Zealand, Create New South Wales and The Australian Council for the Arts.

My work and research involve a great deal of interdisciplinary collaboration. I work closely with colleagues in UNSW’s Key Centre for Photovoltaic Research and Chemical Engineering Department, as well as with companies and municipal bodies such as BP Solar, Pepperl + Fuchs, Sydney Olympic Park Authority, City of Sydney, Randwick City Council, Warringah Council and the Broken Hill Art Exchange . This cross pollination is vital to my practice.

I have acted as an advisor for Waverly council Arts committee

I am a Founding advisor on Eden Unearthed ongoing sculpture exhibitions

Can a trained hand and mind be a disruptive force within political cartooning and fine art?