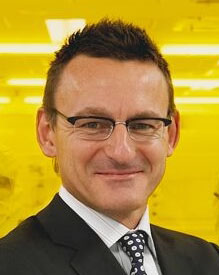 BSc (Hons I & University Medal in Physics), University of Sydney (1987)

Andrew Dzurak is an expert in silicon-based quantum computing and nanoelectronics. He is a UNSW Scientia Professor and an ARC Laureate Fellow, focusing on the development of quantum processor chips based on silicon CMOS technology. Since 2006 he has served as Director of ANFF-NSW, the NSW node of the Australian National Fabrication Facility, a network of university-based laboratories that provide researchers and industry with access to state-of-the-art fabrication facilities. He also serves on the Executive Board and the Technical Advisory Committee of the Sydney Quantum Academy - which draws together the research and educational resources of four Sydney-based universities to catalyse and support the development of a quantum economy.

Since 2010 Andrew has published more than 20 papers in the prestigious Science and Nature group journals, including 6 seminal papers in Nature that include the world’s first demonstrations of one- and two-qubit quantum logic calculations in silicon chip devices. In total he has published well over 200 scientific papers and is a co-inventor on 13 patent families. In 2011 Andrew shared the Australian Eureka Prize for Scientific Research, and in 2012 was awarded the New South Wales Science and Engineering award for Excellence in Engineering and Information and Communications Technologies. He was awarded a Laureate Fellowship in 2019.

Following a PhD at the University of Cambridge, Andrew returned to Australia in 1994 to establish advanced nanotechnology capabilities at UNSW, and has been instrumental in a more than 20-year initiative to develop in Australia the technologies needed to realise a silicon-based quantum computer, working alongside founder Professor Bob Clark AO and others in establishing the Centre for Quantum Computer Technology in January 2000. The centre has achieved major advances in the international effort to realize large-scale quantum information processing and expanded in 2011 to become the ARC Centre of Excellence for Quantum Computation and Communication Technology. It maintains the world’s largest focused collaboration on silicon-based quantum computing. Andrew is also the Lead Investigator on a major research project funded by the US Army Research Office in quantum computing based on silicon-MOS quantum dot qubits.

Andrew and his team have developed a range of new technologies that will be required for silicon-based quantum computing. He is a Director of the company Qucor Pty Ltd, which was established to commercialize this research. He is a regular invited speaker at international conferences on quantum computing and nanotechnology, and has served on numerous advisory bodies including the Photon Sciences Advisory Committee for the Paul Scherrer Institute in Switzerland (2015 -), the Australian Advisory Board on Health Care and Technology Competitiveness (2019 -), the Expert Working Group for the 2012 Australian National Nanotechnology Strategy (AAS), the Expert Working Group for the DIISR 2008 Roadmap Review of the National Collaborative Research Infrastructure Strategy, and the Scholar Selection Committee of the Cambridge Australia Trust.

Key areas of research include:

NSW Govt. Award for Excellence in Engineering and Information and Communications Technologies (2012)

Member, Exective Board, ARC Centre of Excellence for Quantum Computation and Communication Technology (2011 -)

Member, Australian Advisory Board on Health Care and Technology Competitiveness (2019 -)