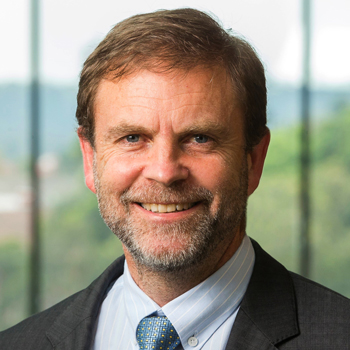 Professor Anthony (Tony) Kelleher is a clinician scientist. He graduated from Medicine at UNSW in 1986. He trained in internal medicine and pathology at St Vincent’s Hospital, Sydney at the height of the HIV epidemic, qualifying as a Clinical Immunologist and Immunopathologist in 1995.

Professor Kelleher completed his PhD in 1997, describing the modulation of the HIV infected immune system by a range of experimental clinical interventions including therapeutic vaccines and IL-2. He made the first observations describing the reconstitution of antigen specific CD4+ T cell responses in patients receiving potent anti-retroviral therapy in the context of an early phase trial of the HIV protease inhibitor, Ritonavir.

He completed a post-doctoral fellowship in Oxford at the Weatherall Institute of Molecular Medicine and Nuffield Department of Medicine, where he studied the coevolution of HIV and the viral immune response. He was the first to describe the requirement of compensatory mutations in the process of delayed immune escape from CD8+ T cell responses. He also developed a methodology for the production of Class II MHC tetramers.

Professor Kelleher returned to Sydney in 2001 to join an Australian consortium developing a prophylactic HIV vaccine based on a prime boost strategy which successfully completed clinical trials in Australia and Thailand.

He has played a role in multiple phase 1 to phase 4 clinical trials and cohort studies exploring the treatment and prevention of HIV infection, especially in the conduct of correlative laboratory-based studies. He has established novel assays for the measurement of CD4+ T cell responses, several of which are patented and have been developed commercially, and pioneered the use of fine needle biopsies of lymph nodes to study both immune responses and the HIV reservoir. He is also exploring novel gene therapy approaches, including  an siRNA based “block and lock” strategy, for the control of the HIV reservoir.

Professor Kelleher was appointed Director of the Kirby Institute at UNSW Sydney in early 2019. He is also Head of the Kirby Institute’s Immunovirology and Pathogenesis Program, and Principal of the Infection Immunology and Inflammation Theme at UNSW Medicine.  As a clinical academic at St Vincent’s Hospital Sydney, Professor Kelleher is responsible for clinical care of patients with HIV infection and autoimmune diseases as well as oversight of the NSW State HIV Reference laboratory.

The laboratory concentrates on comparing the interaction between virus and the immune system in treated and untreated individuals with HIV-infection in an attempt to define protective immune responses with the objective of applying these observations to rational treatment and vaccine design. We have established an exciting new area of research on transcriptional gene silencing of HIV-1 by siRNAs. We have developed and patented new methodologies for describing Treg cells and antigen specific cells which are providing new insights into immunopathogenesis and vaccine design.  These assays will allow novel mapping of the mechanisms underlying the establishment and maintenance of the viral reservoirs which is the roadblock to curing this infection.