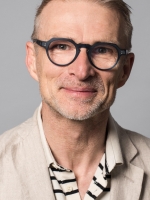 Christian was the kind of kid for whom the entire Wonderworld ride had to be stopped because it was too boring - he wanted to get off. School was no better. At university he took a year off to produce his first product and sold 13000 units successfully. He traveled the world, climbed 5000 meter passes in the Andes, Bhutan and China, drove his old 1952 Vanguard ute across Australia, slept in his swag under the open sky and swam on the beaches of Cape Leveque, Copacabana, the Andaman Islands and Greece were he loves sailing the Ionian sea. In his heart of hearts he is a racing car driver, has a moderate shoe fixation, sports a fading Apple tattoo on the inside of his forehead, is enamoured with his Atomic coffee machine and has a thing for his favourite shop Manufactum in his native Munich. Christian lives with his wife, best friend and muse on the top of the Blue Mountains were above all he practises to take the time to smell the roses - the hardest but most rewarding task!

Dr Christian Tietz is a Senior Lecturer in the Industrial Design program in the Faculty of the Built Environment at the University of New South Wales.

Dr Tietz’ recognised expertise and research interests are in the field of Design and Context. In particular the influence of the environment on user behaviour and product performance, exploring the social impact products have on lives and therefore society. He has been interviewed by ABC Radio over 13 times since October 2017 and you can find some of the interviews here.

He has investigated the role of data in telling a story about the user and their intricate and often surprising daily regimes. He is curious about the way things can reveal a story about their use and place in the world and how this narrative can reflect our perception of things and the ways in which we relate to them. This pertains to the personal, communal and political dimension of products.

His book Health Hardware Design documents the approach to this work and the methodology and underlying principles. His research applied innovative design methods and principles to complex and ill-defined health and environmental problems in remote cross-cultural settings. This shifted the perspective and reframed an existing problem in a new context, allowing for a wider investigation of contributing issues, leading to a solution that required a change in product specification, administration and policy. Previously the users were blamed for the frequent product failure and his work exonerated these under-privileged users and helped dismantle existing entrenched stereotypical views about them. This demonstrated that it was not a user centered cultural issue.

His design led approach made a contribution to the understanding of a product’s sphere of influence and the effects this can have on the users and those administrating them. His approach is therefore not only suitable for hard to reach locations with a diverse user group, but is also suitable to reveal more about the role of manufactured objects in more prosaic urban settings.

His unique and critically important body of work is included in the three editions of the National Indigenous Housing Guide published by the Australian Federal Government and its current international iteration Housing for Health - The Guide. Both aim to support sustainable community development and reference four of Dr Tietz’ reports.

In collaboration with co-authors from various organisations and disciplines he produced publications and exhibitions and has created a deep pool of professional, industry and academic peers and expertise to pursue effective multi partner research (e.g. with medical doctors, sociologists, architects, engineers, anthropologists, health workers, database specialists, environmental health inspectors, housing managers, designers, trades and local Indigenous community members). An example of the practical outcome of his work is his Improving Nutrition design research project which became the specified Design Standard for the Indigenous Housing Association of the Northern Territory (IHANT), resulting in hundreds of his kitchens being installed into community housing.

His design research contribution to trans-disciplinary community development for sustainable wellbeing and health has been recognised nationally and internationally with the 2012 UTS Human Rights Award for ‘sustained commitment to improving the standard of Indigenous Australian environmental health through his innovative designs of health hardware’, the 2011 UN World Habitat Award and being exhibited at The Venice Architecture Biennale in 2012 in the Australian Pavilion’s Healthabitat Exhibit all demonstrate the impact of his work on a global stage.

As the National R&D Manager for Healthabitat (2006-11), he presented twice yearly at the Australian Federal Government’s A$21m, Fixing House for Better Health Program to industry, professionals, academics and State and Federal Government ministerial adviser. In this position he obtained $AUD320,000 in research funding for Manger Initiated Projects.

Christian’s research is about design and context. The influence of the context on behaviour and product performance, revealing the social impact products can have on our lives. The way things can tell a story about themselves and how this narrative reflects on our perception of things and the various ways in which we relate to them. He is interested in the role that data can play in telling this story about the user and their intricate and often surprising daily regimes.

Christian has pioneered the introduction of Industrial design perspectives into the field of remote Environmental Health, especially Indigenous Environmental Health. The interdisciplinary Design research methods developed and used in this field are however applicable and transferable into other often quite different contexts.

It's not about the building - Practice based PhD in Architecture.