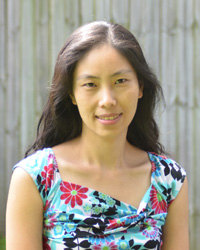 Frances Kuo completed a BCMS(Hons) in 1999 and a PhD in 2002 at the University of Waikato in New Zealand, and subsequently joined the School of Mathematics and Statistics at the University of New South Wales in 2003. Started as a Research Fellow, Frances obtained a UNSW Vice-Chancellor's Research Fellowship in 2004-2006, an ARC QEII Fellowship in 2007-2011, and was appointed a Senior Lecturer in 2012. She is an ARC Future Fellow since 2013, Associate Professor since 2015, and Professor since 2019. Frances was the recipient of the inaugural Information-based Complexity Young Researcher Award in 2003, and the ANZIAM J.H. Michell Medal in 2011, and the Information-based Complexity Prize in 2014. She works in the theory and applications of high dimensional integration and approximation, especially quasi-Monte Carlo methods, multilevel and multivariate decomposition techniques. Her recent interests are in their application to partial differential equations with random coefficients and uncertainty quantification.