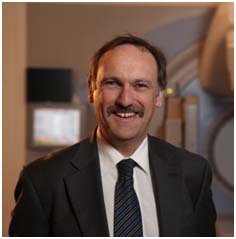 Professor Delaney is the Director of Cancer Services for the South Western Sydney Local Health District (SWSLHD) and Director of Liverpool Cancer Centre. He is an experienced Radiation Oncologist with his main areas of expertise being in breast cancer, radiation oncology, service planning and health services research.

He has a PhD and an MD for research into radiation oncology. He is also a conjoint Professor for the University of NSW and University of Western Sydney.

Professor Delaney has over 200 publications and has been successful with NHMRC and NSW Cancer Institute grants. He holds numerous committee responsibilities including for the National Breast and Ovarian Cancer Centre, NSW Health, NSW Cancer Institute.

He played a significant role in establishing the Collaboration for Cancer Outcomes Research and Evaluation (CCORE), a centre for oncology health services research situated at Liverpool Hospital. In the 12 years that CCORE have been operating, over 150 publications and reports have resulted from investigators in CCORE. He has developed international collaborative links with other research groups including Cookridge Hospital, Leeds; Glasgow Hospital, Scotland; Tom Baker Cancer Centre, Calgary, Canada; British Columbia Cancer Agency; Kingston, Ontario. He also played a role in establishing other research collaborations such as the NSW Breast Radiation Oncology Group and also chairs the NSW Cancer Institute Area Cancer Registry Project Steering Committee.

The research work that he has done with CCORE has included the establishment of a better measure of linear accelerator treatment throughput, the study of patterns of care for lung cancer across NSW, the development of optimal radiotherapy treatment pathways and estimation of the overall proportion of patients that should receive radiotherapy, an optimal chemotherapy utilization estimate and the study of a new radiation oncology incident reporting tool. All of these studies have had impact on clinical practice. The treatment throughput measure was adopted by NSW Health as a better measure of linear accelerator throughput and was also investigated by research groups in the U.K and Canada, the optimal radiotherapy utilization project has been adopted as the best measure for radiation oncology health service planning in Europe, Scotland, Victoria and NSW and was adopted by the International Atomic Energy Agency for radiotherapy service planning in middle and low-income countries. His current areas of clinical research relate to better targeting of radiotherapy for breast cancer using MRI.

In conjunction with his former Director of Radiation Therapy, Mr Anthony Arnold, Professor Delaney has developed an incident reporting tool for radiation oncology. The incident reporting tool has been adopted by radiation oncology departments in NSW and plans are underway to roll-out the tool to all departments in Australia. Negotiations with government are on-going.

As a co-investigator or principle investigator, he has been involved with19 clinical trials conducted Sydney South West Local Health District in a wide variety of cancers.

He has been the recipient as investigator or co-investigator on 17 research grants valued at over $AUS17M. He has been a manuscript reviewer for a wide range of national and international oncology journals and has supervised radiation therapy and radiation oncology post-graduate degrees including two current PhD candidates. He is also the Australasian regional editor for Clinical Oncology.

Research Interests:
Radiation Oncology health services research focuses on studying the differences between current practice and what is proposed as optimal therapy using evidence-based medicine and understnding the reasons for the differences between the two. Our research group use the evidence-based treatment guidelines published in Cancer and calculates the ideal population of patients who should receive treatment and then examine reasons for shortfall. Other interests include breast radiotherapy, cardiac risk modelling for breast radiotherapy, big data, radiotherapy incident reporting and patient reported outcomes.