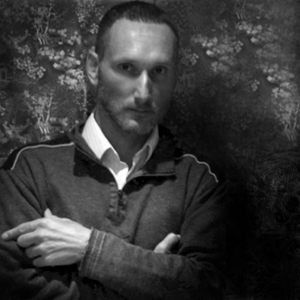 Kurt Schranzer is a Sydney-based artist and lecturer, primarily working within the discipline of drawing. Finding aesthetic similitudes with 20th century European modernism, he has drawn widely from both art and literature, including the works of Paul Klee, Jean Arp, de Chirico, Max Ernst, Lorca, Genet, and Cocteau. His reduced, architectural drawing style challenges the assertion that the gesture or ‘expressive mark’ is drawing’s quintessence. Joe Frost, in his review of Drawings: Kurt Schranzer & Tony Tuckson, speaks of Schranzer’s approach as epitomizing drawing as a controlled process whilst still having a regard for beauty and psychological effect. Christopher Dean writes in The Speculum of the Other Man that Schranzer’s formal line work is both scientific and fetishist, constituting “a boys own journey into modernism.” Steering a course through abstraction and figuration, and from drawing into object-making, Schranzer’s personae and subjects are eclectic and idiosyncratic, traversing the celestial, botanical, nautical, avian alongside the male nude. They are exploited to elaborate upon themes of masculinity and self-identity, the homo-social and the erotic, the psychoanalytic, and the esoteric.

Schranzer's most recent works deal with cross-cultural and art-historical quotations, principally between the visual languages, compositions, and themes found in Western modernism and Japanese ‘warrior pictures’ (武者絵, musha-e) of the 19th century (late Edo period). They deploy conventions and techniques found in Modernist collage practice, 19th century technical drawing, and 20th century digital drawing, situating his work within the realms of fine arts, engineering, and graphics conventions, contributing to discourses on the nature of disciplinary practices and fusions of high and low art traditions. They take as their main stimulus themes and compositional variations within Japanese ‘warrior pictures’ by Utagawa Kuniyoshi, Yoshitora, Yoshikazu, Sadahide, and Tsukioka Yoshitoshi that depict ocean battles and other legendary scenes. From a psychoanalytic perspective, Schranzer often adopts the alter-ego of Lop-Lop, a reference to the bird-like figure Loplop originally used as an alter-ego by the modernist artist Max Ernst. In many images, Lop-Lop himself takes on the identity of Minamoto no Yoshitsune (源義経), a commander of the Minamoto clan in the early Kamakura period, often described in Japanese literature and culture as a ‘tragic hero’—a great but deeply flawed warrior. In this regard, there is a complex quotation that is personal, cross-cultural, and art-historical.

Schranzer has worked at UNSW Art & Design (previously known as College of Fine Arts and City Art Institute) since 1988 in both technical and academic capacities. He has taught within the disciplines of drawing and painting since 2000, at both undergraduate and postgraduate coursework levels. His drawings have been exhibited internationally and nationally at various galleries, institutions and universities, including the Art Gallery of New South Wales, Grafton Regional Gallery, Hazelhurst Regional Gallery, Orange Regional Gallery, Penrith Regional Gallery & The Lewers Bequest, Tasmanian Museum and Art Gallery, and the Mornington Peninsula Regional Gallery.

Kurt Schranzer is an Education-Focused (EF) academic, teaching within the Bachelor of Fine Arts program. His workload is principally devoted to teaching, though he is also undertaking creative research focused on cultural and art-historical pollinations between 20th century European modernism and 19th century Japanese ukiyo-e.