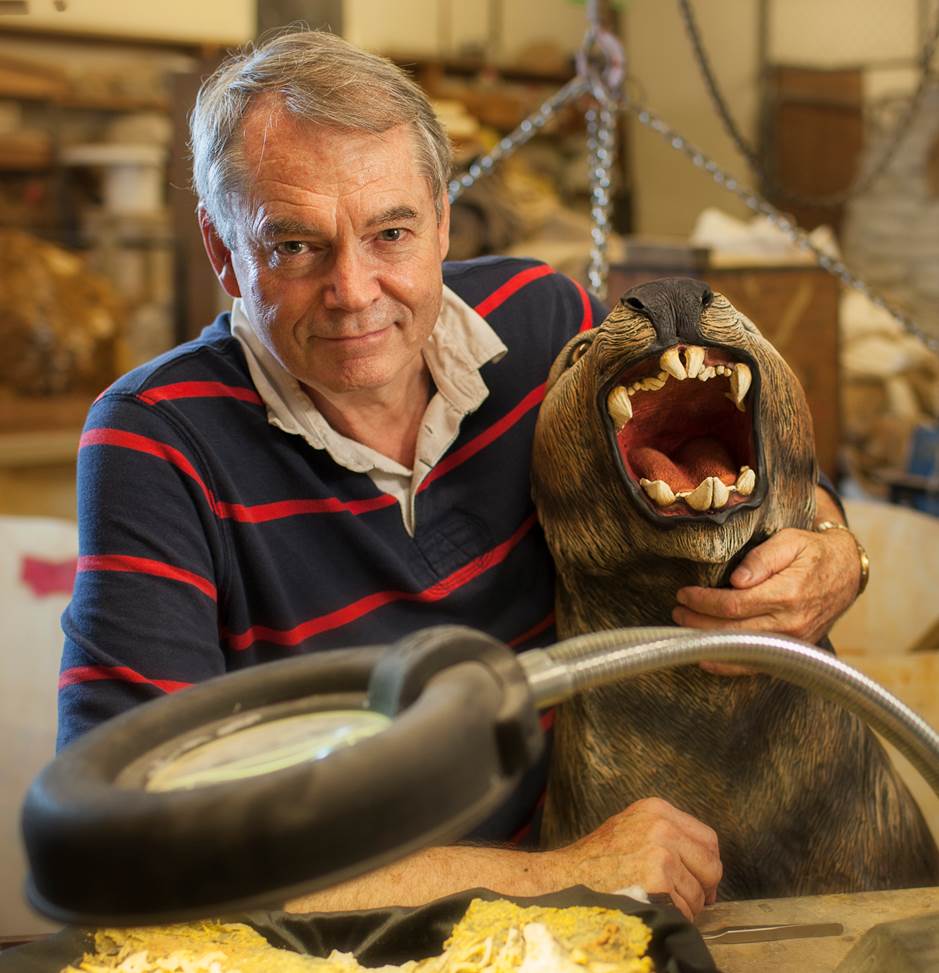 Mike Archer was born in Sydney but grew up in the USA. After graduating from Princeton University he returned to Australia, did his PhD in the University of Western Australia, became Curator of Mammals at the Queensland Museum, Lecturer in the University of New South Wales, Director of the Australian Museum in Sydney, Dean of Science at the University of New South Wales and now a Professor and member of the PANGEA Research Center at UNSW. His research focuses on the deep past such as the World Heritage fossil deposits at Riversleigh, the fragile present such as conservation through sustainable use of native resources including having native animals as pets, securing the future based on the wisdom of the fossil record, and trying to bring extinct species (e.g., the Gastric-brooding Frog and the Thylacine) back into the world of the living. He has supervised/co-supervised more than 80 research student degrees, produced over 350 scientific publications including 15 books and received a range of awards including Fellowships in the Australian Academy of Science, Royal Society of NSW, Royal Zoological Society of New South Wales, Australian College of Educators, Eureka Prize for Promotion of Science and Member of the Order of Australia.

Since 1984, private individuals have provided donations in response to our public appeals for support. In total, these have amounted to more than $1,500,000. We have established in perpetuity the CREATE Fund within the UNSW Foundation to assist students and staff researching in the palaeosciences. Other private individuals who have provided significant research donations include: Martin Dickson, Margaret Beavis, Elaine Clarke, Gary Johnston; Dick Smith; Ken Pettit etc.

Since 1999, monies personally raised as donations, sponsorships and legacies have exceeded $5m plus more than $20m as in-kind donations. As the Director of the Australian Museum, I raised over $42m. As the Dean of Science, I collaborated in raising more than $45m. Recent grants e.g. to progress our Burramys Project have included $190,000 from the Prague Zoo in Czechoslovakia.

Over 100 researchers from 28 institutions and 13 countries (France, Germany, Sweden, Czechoslovakia, England, U.S.A., South Africa, China, Canada, Argentina, Japan, New Zealand & Australia) are collaborating in the analysis of the fossil deposits of Riversleigh, Murgon, Central Australia, Cape York and New Zealand which includes the fossil records of more than 83 families of animals and plants. Three of the largest projects include the World Heritage Area of Riversleigh, the Eocene deposits of Murgon in SE Queensland and the Early Miocene deposits of the South Island in New Zealand. Summaries of some of this work can be found on the CREATE Website: http://www.create.unsw.edu.au/. An overview of some of the more recent discoveries being made at Riversleigh can be found at http://www.smh.com.au/data-point/bone-city-unmasked-20130802-2r4ip.html, https://www.smh.com.au/technology/riversleigh-20130717-2q38h.html and https://vimeo.com/71542680. Many books and more than 300 peer-reviewed publications have been produced on the basis of this research. Aspects of the palaeontological projects address United Nations Sustainable Development Goals 13 (Climate Action) and 15 (Life on Land).

We have been developing a new science called ‘Palaeoconservation’ that uses palaeontological discoveries from the past to understand the present in order to develop innovative strategies for conserving endangered species into the future. This research addresses the United Nations Sustainable Development Goals 13 (Climate Action) and 15 (Life on Land). Our current focus is on building a breeding facility for the Critically Endangered alpine Mountain Pygmy Possum (Burramys parvus) whose survival is threatened by climate change. We’ve raised more than $500,000 to implement our ‘Burramys Project’ which is now well underway. For information about this research conservation program, see: https://www.abc.net.au/news/2021-05-21/mountain-pygmy-possum-sanctuary-lifeline-prague/100149314?fbclid=IwAR1udiGp6UGg7rgrBw6pcoOMrDVf-d2ae9R23cxyo6_wSEtD81zOBCohSBA; and the most recent publication about this Project https://royalsocietypublishing.org/doi/full/10.1098/rstb.2019.0221.

The primary focus here has been on ‘DeExtinction’ efforts involving the Thylacine (Thylacinus cynocephalus), and the Southern Grastric-brooding Frog (Rheobatrachus silus). The TED talk I gave and those of others contributing to the TEDx DeExtinction event in Washington DC can be accessed here (http://www.ted.com/talks/michael_archer_how_we_ll_resurrect_the_gastric_brooding_frog_the_tasmanian_tiger.html), A newspaper story by Nicky Phillips that appeared in the Sydney Morning Herald on 15 March, 2013 (p. 1), is available online: http://www.smh.com.au/environment/animals/extinct-frog-hops-back-into-the-gene-pool-20130315-2g68x.html. There is an earlier (2002) Discovery Channel documentary about the Thylacine Project (The End of Extinction: Cloning the Tasmanian Tiger, produced by Becker Entertainment, Directed by Patrick O’Neill): http://www.youtube.com/watch?v=S3gNW7LbO0M. A debate between me and the Executive Editor of Scientific American about the merits of deExtinction occurred on the Canadian Broadcasting Corporation is available (http://www.cbc.ca/toothandclaw/popupaudio.html?clipIds=2401773888). These deExtinction projects, in striving to increase global biodiversity address the United Nations Sustainable Develop;ment Goal 15 (Life on Land).

1, Crossbow Enterprises Pty Ltd, Director with Norm Wilkinson, to conceive and develop documentaries arising in the first place from research done at Riversleigh and in relation to the Lazarus Project;

3, Mammal Society of NSW Inc, Founding Member with others to promote the initiative of Australians being able to have selected native mammals as pets (started 2019). https://www.abc.net.au/news/2021-08-11/keeping-australian-native-animals-as-pets/100362834

Australian Museum expansion. In 2003 the State Government agreed to provide $40m to develop an annex on its eastern flank; the new AM wing constructed using these funds opened in 2008.

Age of Fishes Museum, Canowindra, NSW. Stage 2 of this initiative was progressed and broadened to develop collaborations with the Royal Tyrell Museum in Canada.

Lightning Ridge Opal and Fossil Museum, Lightning Ridge, NSW. This initiative, which began in 2003, is now being progressed by local organisations and personnel including Jenni Brammall (former palaeontology research student at UNSW). Stage 1 (with Glenn Murcutt as architect) was launched by the Governor General of NSW in 2011; further funding of $18m committed by State & Fed Governments in 2019.

Wellington Caves Museum, Wellington, NSW. Discussions began in 2003 between the Australian Museum and the Wellington Shire and Caves Board to establish a major regional museum in Wellington to display the AM’s Wellington Collections. Renovation is currently underway (2019).

The Eye Health Institute in UNSW made possible by a generous donation of $40m from Guide Dogs NSW/ACT. As Dean of Science at UNSW which includes the School of Optometry & Vision Science, I worked with UNSW and Guide Dogs NSW/ACT staff to ensure that this initiative was soundly conceived, supported, directed and managed.

Sydney Institute of Marine Science at Chowder Bay. As Dean of Science at UNSW I worked as an inaugural Director with others including Prof. Frank Talbot and other Deans/Deputy Vice-Chancellors at Univ. Sydney, Macquarie and UTS to successfully establish this four-university research/teaching entity.

Students have been supervised in a wide range of research topics including vertebrate palaeontology, palaeobiodiversity, stratigraphy, palaeoecology and biocorrelation. Other students have focused on the field ecology of small desert marsupials, molecular and morphological systematics of bats, electrophoretic and morphological systematics of marsupials, phylogenetic systematics of New Guinean mammals, functional dental morphology, feeding behaviours of marsupials, basicranial functional morphology, forest ecology of bats, snake and bird phylogenetics and native animals as pets.

Jobs after our students graduate. Almost all of the students supervised have gone on to PhD or postdoctoral research programs or have jobs in universities, museums and other institutions. Most have gone on to illustrious careers (although not always in science) such as Paul Willis (scientist, ABC Science Unit, Director of the Royal Institute of Australia), Kerry Nettle (Greens Senator), Walter Boles (Curator of Birds, Australian Museum), Ken Aplin (CSIRO Senior Research Scientist), Scott Hocknull (Young Australian of the Year, Curator of Fossils at the Queensland Museum), Tim Flannery (Australian of the Year; Climate Commissioner), Mina Bassarova (World Wildlife Fund), Stephen Salisbury (senior academic in the University of Queensland), Pip Brewer (Curator of Palaeontology in the Natural History Museum, London), Steve Wroe (Queen Elizabeth II Fellowship; senior academic in the University of New England), Robin Beck, Postdoc in the American Museum of Natural History; academic in Salford University, England); Ben Kear, Professor in Lund University, Sweden, etcetera. Common denominators in the success of most are the graduate attribute skills they picked up during their time at UNSW including science communication.

Undergraduate courses taught (as at 2021)