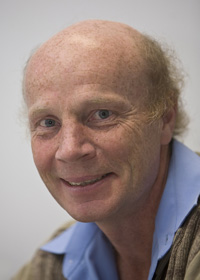 My research centres around the study of how stars form and the excitation of the interstellar medium in which this occurs. This makes uses the tools of infrared and millimetre-wave astronomy, measuring the spectral signatures arising from the gas and dust in interstellar molecular clouds.

The Mopra millimetre telescope in Coonabarabran, NSW and the Nanten2 sub-millimetre telescope in Chile play a primary role in this research.  Two large survey programs being conducted with it include the organic molecules residing in the Central Molecular Zone of our Galaxy, and of the distribution of the molecular gas along the fourth quadrant of the Milky Way.

Using Mopra, the Nanten2 sub-millimetre telescope in Chile and the Stratospheric Terahertz Observatory (a balloon-borne telescope in Antarctica) I am engaged in a project to understand how molecular clouds - the sites where stars are conceived - are formed in our Galaxy.

My research has also led me to Antarctica, where the extremely cold and dry air provides the best infrared and sub-mm observing conditions on the Earth. I am actively involved in the development of Antarctic astronomy. I organised the first-ever International Astronomical Union Symposium in this field, in Beijing in August 2012.

I am the Editor of the Journal and Proceedings of the Royal Society of New South Wales - the oldest refereed publication in the Southern Hemisphere.