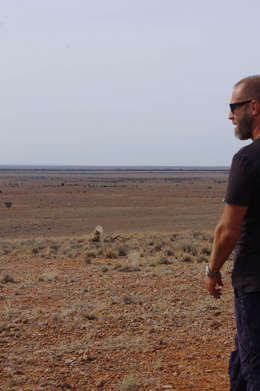 Peter Sharp’s research over twenty five years has consistently been about the visual exploration and understanding of how nature works and fits together through the lense of abstraction.

His art covers a wide range of media including painting, drawing, sculpture, printmaking and video.

“Sharp’s paintings, with their fluid lines and deep colours, worked surfaces and biomorphic forms, are abstractions of landscape. Or, more precisely, they are records of Sharp’s reactions to the landscape. Visual interpretations that serve witness to his process.” (Andrew Frost, “Just Enough”, Peter Sharp: Will to Form, Hazelhurst Regional Gallery and Arts Centre, 2012, p13)

“I tend to fall in love with a subject, then filter it through different media… My primary media would be drawing, as without that initial interrogation of the landscape I’d be lost! Drawing tends to be less ego-drive, more open…” (Peter Sharp, “Not the Way Home: Desert Paintings from 13 Artists”, Artist Profile, Issue 18, 2012, p56-57)

Sharp completed a Bachelor of Art Education at City Art Institute, Sydney in 1987 before graduating with a Masters of Fine Art at the University of New South Wales, College of Fine Arts in 1992. From 1989-1999, Sharp held regular solo exhibitions at Coventry Gallery, Sydney. In 1996, Sharp's work was acquired by Grafton Regional Gallery as part of the Jacaranda Drawing Prize and in the following year was granted a residency at the Cite’ des Arts Internationale, Paris, where he collaborated with French printmakers to make a series of lithographs and etchings. In 1999, he was invited to exhibit at Kunstraum 34 in Stuttgart, Germany. In 2001, Sharp participated in the award winning television documentary Two-Thirds Sky, which culminated in an exhibition of the same title held at the Hazelhurst Regional Gallery and Arts Centre. His paintings have been exhibited in the Wynne Prize (1996, 2003), the Sulman Prize (1998, 2008) and the Dobell Prize for Drawing (2009, 2010) at the Art Gallery of New South Wales. In 2009, Sharp was invited to be part of the Taronga Zoo Artist-in-Residence program which was featured on the ABC.

In 2011, Artist Profile magazine sponsored a group of 13 artists including Peter Sharp to travel to Fowler's Gap in far western NSW and respond to their surrounding landscape in a body of work. Curated by Owen Craven and in association with Winsor & Newton, 'Not the Way Home', an exhibition of the artists' work was exhibited at S.H Ervin Gallery, The National Trust, NERAM, and Broken Hill City Art Gallery in 2012.

In 2012, Sharp held his first survey at Hazelhurst Regional Gallery and Arts Centre titled 'Peter Sharp: Will to Form', curated by Liz Nowell and featured works from over a 15 year period. This survey also culminated in the publication 'Peter Sharp: Will to Form', a 120 page fully illustrated hardback catalogue, which includes essays by Andrew Frost and Gillian Serisier.

In November 2014, Sharp was selected for the inaugural Dobell Australian Drawing Biennial, titled "Drawing Out" at the Art Gallery of New South Wales, curated by Anne Ryan.

Damian Moss                 Subjectivity and Authorship: Surface and Materiality in Painting and Drawing    MFA

Kieran McInnes              An investigation of European pictorial conventions with reference to