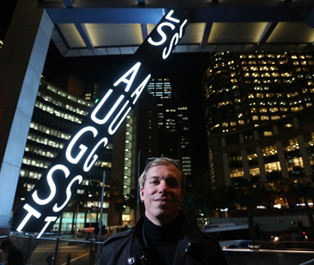 Story by Fran Strachan
Dr. M. Hank Haeusler Dipl.-Ing. (Fh) / PhD (SIAL/RMIT) is a senior lecturer in Architectural Computing and Architectural Studies at UNSW Built Environment.
Hank Haeusler is fascinated by the power of light to transform buildings.
A senior lecturer in the Faculty of Built Environment, the German-born designer is a leader in the emerging area of media architecture – the use of building façades to communicate messages (think the neondominated city scapes in futuristic films likeBlade Runner).
Hank has written five books on the subject, including his most recent, New Media Façades – A Global Survey, which took him on a global search for buildings that literally “light up”.
“I’ve seen media façades in every sort of setting from the desert to snow-covered Chicago. For me, media architecture isn’t just about putting a big screen on a building. It’s about activating materials in a controlled manner through light.”
Arriving in Australia for the first time as a backpacker in 1996, Hank returned to do an architecture internship while doing his MA in Stuttgart. He then enrolled at RMIT and UTS to complete his PhD and post doc.
“By that stage I knew I was doomed to stay,” he laughs.
As President of the Sydney and Vienna– based Media Architecture Institute, Hank has watched as more architects choose to specialise in media architecture, taking advantage of cheaper materials and advances in technology. The façades are ideal for messages about public events, the weather or public transport so it makes sense that we are seeing more of them.
“Access to mobile phones has taken people away from each other,” he says. “We need to find ways to use technology to bring people back together.”
Early ambitions? As a teenager I trained as an engineer but I didn’t like it. Now I find that experience invaluable to my work as an architect. The irony of life is that often you end up doing what you first learned.
What don’t people know about you? Now I wear colourful sneakers and belts, but previously the colour was in my hair. Only Dennis Rodman, a Chicago Bulls player in the mid-1990s, had as many hair colours as me.
What does the future hold? More digital technologies complementing the public transport system. Eventually community information will be displayed like a local Facebook in bus stops to bring us closer together.
Working at UNSW? Where else can you access so many ideas? UNSW students are very open to new knowledge – it’s enormously interesting and pleasing as a lecturer to see.