UNSW experts give their analysis of the 2016 Budget

Experts from UNSW Australia Business School have given their independent analysis of the Federal Budget 2016 in a roundtable discussion at the Museum of Sydney on 4 May 2016. 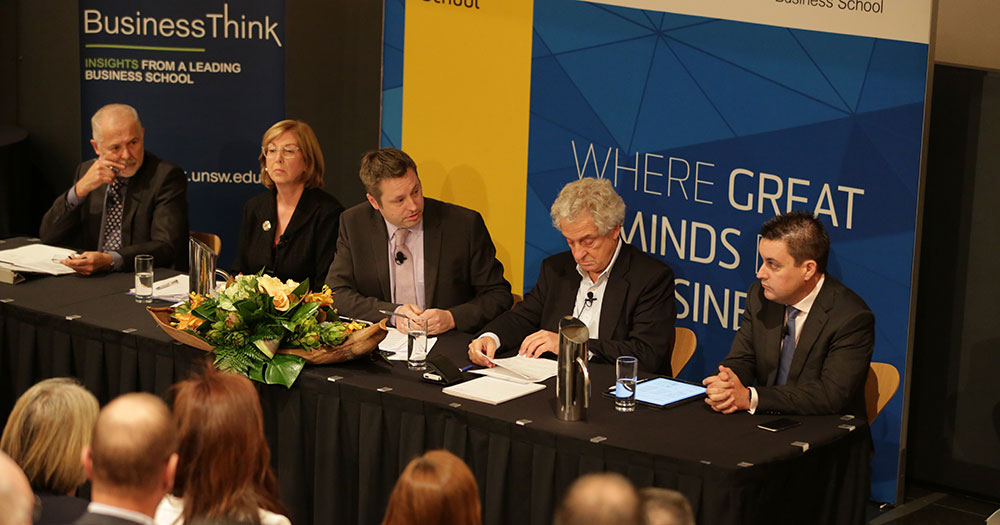 Experts from UNSW Australia Business School have given their independent analysis of the Federal Budget 2016 in a roundtable discussion at the Museum of Sydney on 4 May 2016.

Federal Treasurer Scott Morrison readied the 2016 Budget with a close eye on the forthcoming election.  He didn’t have much room to move – delivering a budget with few surprises and forward projections based on an optimistic outlook.

The BusinessThink 2016 Budget roundtable analysed the announcements in Canberra, and new measures presented by Scott Morrison. Moderated by Julian Lorkin, the panel of UNSW Business School experts reacted to key budget measures, such as new tax breaks and regulations, as well as ideas around taxation and stimulating the economy that will shape the Australian business landscape.

The academic panel was introduced by Professor Chris Styles, the Dean of the UNSW Business School.

Starting the panel, Professor Richard Holden looked at the economic impact of the budget. In particular, he highlighted the forecasts of a deficit of 37 billion dollars for next year, and he contrasted that with the GDP forecasts.

He says there is an assumption that the economy roars back to health. “I used to refer to these kind of rosy assumptions three and four years out as Hockey’s Hockey Stick, but I can’t use that anymore. However, the same idea basically applies. One of the key figures is nominal GDP growth, which is 1.6 %. It’s looking like being maybe 2% this year, and its forecast to be 4.25% in the next year of the first year of the estimates of the budget, and then 5% thereafter. And that’s a key figure for driving tax revenue. That figure attracted a lot of attention and a lot of skepticism in the budget lockup, and I think we should be worried about the implication of that for the deficit.”

Professor John Piggott from CEPAR looked at the budget implications of superannuation and taxation. He said the cuts to superannuation seem quite dramatic - they go further than expected, with a new $1.6 million cap on super balances eligible for tax-free earnings in retirement.

He believes there will be a substantial stratum in the community - particularly people in middle age - that will notice the annual cap on concessional contributions has been lowered from $30,000 to $25,000.

He says a limit of $25,000 is all very well if you’re young, “but once you have some discretionary income – your kids have left home, your salary has gone up, both spouses are now working full-time again – there is the opportunity to top up your superannuation and this is the time when you might make some up. Now, there is a five-year averaging provision, which might help some. But $25,000 – it’s come down actually from $35,000 for the 50-pluses – that’s going to impact a number of people and I don’t see it actually as supportive of income replacement in retirement for the middle classes. I think that’s going to be an issue in the time to come.”

He also looked at the issue of the new tougher limits for the rich, and questioned whether this might mean there is more flexibility to encourage middle-income earners to save. “There are different interpretations out there. I think there’s everything still to play for in this space and we’ll have to see what the lobbying leads to.”

Professor Neil Warren from Taxation and Business Law said that workers earning around $80,000 per year can expect some tax relief because “the threshold for entering the second-highest tax bracket, where earnings are taxed at 37 cents in the dollar, is pushed higher to $87,000. However in the scheme of things that’s pretty small beer.”

Professor Warren said the government had also confirmed it will implement GST on low value imports below a thousand dollars, by forcing overseas suppliers with a turnover above 75 thousand dollars to register for GST. “At the heart of the issue is how do you administer something like this? And the answer is, don’t get hung up on the how. The fact is, give me the bucks, and forget about the administration.”

He adds that in Europe they’ve had this for a very long time. “It’s very simple. If you’re selling into the EU you need to register in some particular country in the EU; they don’t care where. And then you have to track where all your sales went within the EU and pay the VAT to that jurisdiction where you registered and they’ll distribute it accordingly. The whole point of it is that you know that there’s going to be non-compliance, and frankly you don’t give a hoot about that because you’re after Amazon, Sony, Adobe, Microsoft, and Netflix. This is the Netflix tax. It’s not about getting hung up on administration.”

“We’ve taken a long time to really start thinking about this and we’ve now got a suite of what you might call reforms or changes that will have potentially significant impact on these areas, but at the same time it is incredibly complicated. It’s all about anti-avoidance and making sure that we try and get our fair share of tax from these multinationals that are all doing the wrong things.”

“We don’t know how that’s going to work,” she says. A similar diverted profits tax was introduced into the UK in April 2015. “It’s incredibly complicated if we start looking at the UK legislation. So I think there’s going to be lots of work for accountants and lawyers but I’m not so confident that it’s going to do a lot of good.”

The full podcast of the entire BusinessThink Federal Budget 2016 round table is also available.