The heart of Leichhardt to be revived by Interior Architecture students 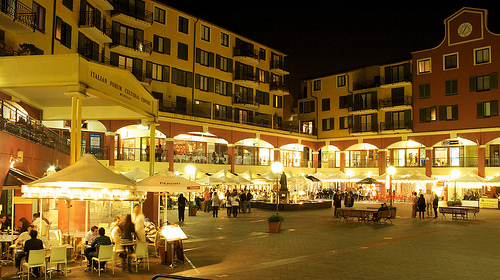 By Paul Denham
Now with a different owner (Italian not-for-profit Co. As. It. bought it in 2014) there is fresh hope the Forum can once again be the cultural hub of Leichhardt. Over 100 second year UNSW Built Environment Interior Architecture students are involved via a project called Translate. Samantha Donnelly, Associate Lecturer and Course Convener, selected the Forum for her students because of its history. She explains, “Its history as a successful, then failed retail site was something which the students could find strong, current and political ideas in.” During a site visit in the first week of semester one this year (100 students and six staff are hard to hide) members of the public were approaching them expressing hope that the Forum would be revived.

Donnelly explains, “They came to inquire whether our investigations heralded a new direction for the Forum. The sense of hope from people in general was a surprise and made it obvious that this project had the potential to be more than just a studio exploration.”

Both the centre management and The Actors Centre, located in the Forum, welcomed Donnelly and her students with open arms. Management actively sorted students’ ideas and made building plans available while The Actors Centre helped with site visits and have generously donated their foyer space so students can exhibit their final project ideas (launches June 23rd at 6pm) where local government members and the general community will be invited to attend. Now management are considering funding some elements of the student work including the “transformable furniture” idea which is a module designed to be moved in and out of the piazza to “transform” the space. It’s also  designed to be multi-purposed from serving refreshments to displaying and selling merchandise and tickets. It would also be able to be closed up after hours.
Donnelly stated that an important element of the project was the guest lectures, “We had Gary McCartney from McCartney Design, a big thinker in future food retail spaces and Remo Guiffre who is currently working with TEDx Sydney and is another star when it comes to retail thinking and the future of merchandising.”

Project work by Logan Morrow
So, where will all this lead? Donnelly hopes that her students’ ideas will get funded, tested, built and implemented in the hope of making the Forum the bustling, in-demand cultural centre it used to be. Says Donnelly, “The students are very excited about the opportunity to make this element a real space within a public setting, to be able to test their skills and actually build a real space within a real set of constraints.” That means that Translate will be another future studio project or become an elective subject.
It’s so understandable to see why this has become so important for so many stakeholders. The students have accidentally created a real design project for themselves that might be funded, the community clearly still want the Forum to work and the management might end up with a thriving, profit making centre again. And if it did, imagine having this on your resume before you have graduated – Interior Architect on The Italian Forum resurrection. If that doesn’t make you employable, I don’t know what would.
Find out more about the UNSW Built Environment Interior Architecture degree

Design Practice 3 involved a trajectory across three specific aspects of retail: object, service and idea.
The students explored these 3 programmatic variations on a retail site in the Italian Forum in Leichhardt. This site has a series of problematic challenges which the students rigorously researched – relationships between community and culture, political issues, environmental and physical aspects as well as exploration into current and past retail tenancies.
The students worked through 3 project proposals for one site, which incorporated an interior, a walkway and an extension into the Piazza space. The first project (Object): a flagship store for Lego Architecture, secondly (Service) a Maker space for the Inner West community and thirdly (Idea) a TEDx Talks space with an associated bar/ merchandise kiosk.
Each project presented a series of conditions, both physical and virtual, which assisted in decision making and understanding how exchange is translated into a spatial event. Each project is an exploration not just of the interior but of its relationship to the Piazza with an emphasis on materiality.
The theoretical framework of these projects has been the idea of "translate", which explores the handing over, exchange, or shifting of objects, people and ideas. Translation provides a way of looking more critically at that moment of exchange.
Video: What does an Interior Architect do?
Translate picture gallery: A Maker Space
Translate Picture gallery: A flagship store for Lego Architecture
Translate: Course description