Forgive us if we're cynical about another Indigenous inquiry

Like the young man shackled to a chair, it seems Indigenous people have little say in their fate, writes Louise Taylor. 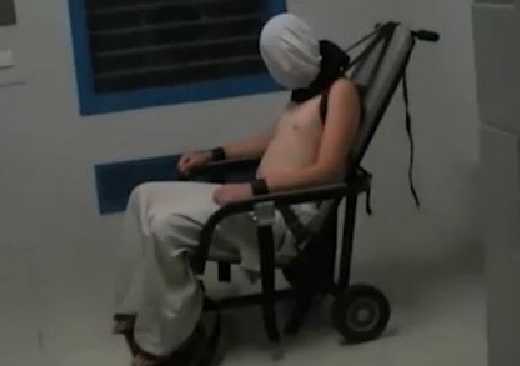 There is a moment towards the end of the footage that we were never meant to see of Dylan Voller shackled to a chair with a hood over his head where he is asked whether he is going to calm down. He’s been sitting there like that for hours. He nods, tiredly, resignedly. And it seemed to me as if Voller might be nodding in tired resignation for an entire people. A people over-policed, over-incarcerated and overwrought by the position we still find ourselves in.

Voller is but one example of the enormous task that is set for the criminal, juvenile and child protection systems. Those systems are asked to fix a great many problems they are neither equipped nor properly funded to achieve. It is presented with record numbers of our children, young people and adults with complex problems and asked to solve them.

We hear you say rehabilitation is at the heart of those systems for children and then see you embolden the system to brutalise and degrade them. We see you accept this as a byproduct of some of the dysfunction in our communities without ever engaging with the driving forces behind how our children come to be in the systems in the first place. We hear you talk about self-determination and recognition in an effort to strengthen the position of our people, and then see an opportunity for us take the lead on a solution become a comedy of errors.

Indigenous people are supposed to see images of their children tied up, stripped naked and brutalised and meekly accept assurances that the government will, this time, find a solution. Our people have been down the royal commission road before and yet here we still are – with the statistics getting worse and the problems seemingly more intractable.

So you must forgive us if we’re cynical, frustrated and just plain angry about the inaction at the heart of our position and yet another inquiry designed to placate us.

I fear this commission will likely tell us what we already know and cost a significant amount of time and money to do it. Anybody who knows anything about the pointy end of our justice systems knows that while we allow governments to only address the symptom through the tired “tough on crime” approach, the causes will continue to fester and the revolving door of incarceration will go on unabated.

The royal commission solution was initially – in both design and construction – flawed, conceived of without our influence and guided by the hand of the people closely connected to the regime in which the specific issues arose. Even with this next iteration with the fresh appointment of social justice commissioner Mick Gooda and justice Margaret White, concerns remain.

Tellingly there is no specific acknowledgement or directive in the terms of reference targeting the particularly vulnerable position of young Indigenous women and girls. The royal commission into Aboriginal deaths in custody 25 years ago rendered Indigenous women almost invisible and today we are firmly in the clutches of the juvenile, criminal and child protection systems – in a complex intersection of our roles as victims, sometimes perpetrators, and as mothers. Any current inquiry must have specific regard to that.

Perhaps if Indigenous people with the knowledge and expertise around juvenile and criminal justice had been consulted prior to the set up of the commission, young Indigenous women would specifically feature in the terms of reference, and we may not have seen the rather embarrassing resignation of Brian Martin.

It’s been a drama which has completely distracted from the business of addressing the welfare of our children and has tainted the serious business the commission is tasked with. It remains to be seen if Gooda and White will bring the confidence and traction a commission like this needs.

The images were but confirmation of the position the great numbers of our people who are incarcerated have in the collective minds of Australians. That you needed to see the images to believe us speaks volumes about that position.

Gooda in particular might have some work to do. He is not legally trained, is known for his consensus style of operation, and could yet face a challenge to his role from Territory lawyers about his very public call for the NT government to be sacked. Royal commissions are litigation-like beasts, and there will no doubt be some of the country’s most skilled litigators acting on behalf of the variously interested parties, and Gooda will have to get used to keeping them in line.

A significant point remains about the initial set of the royal commission – a telling insight into how Indigenous concerns feature in the political landscape of this nation. The philosophy that pervades Indigenous affairs constrains our ability to have influence over the policies that play out in our daily lives and does not bode well for a government that says it is committed to constitutional Recognition.

Not given the courtesy of meaningful consultation, initially not considered capable of being appointed in a commissioner role, we were then expected to trust that a formerly instrumental figure in the Northern Territory justice system – one that sees our people marching through the custody doors in record numbers – would identify the systemic racism that we know plays a role in that system.

Those Don Dale boys and our girls in juvenile detention pay the price for our lack of political power. Meanwhile, we have the knowledge, the expertise and the answers that will attack and dismantle the systemic racism that kills us. We can provide the coalface solutions to our communities.

Sadly the shocking images from Don Dale were not a surprise to our communities. We hear these accounts regularly and indeed some of the Don Dale accounts have been on the record since 2014. The images were but confirmation of the position the great numbers of our people who are incarcerated have in the collective minds of Australians. That you needed to see the images to believe us speaks volumes about that position.

And so like Voller, we nod tiredly. Like that young fella shackled to a chair it seems like we have little say in our fate – as we face another royal commission while the last one still sits collecting dust in so many drawers. As a community we are weary of the reports, the inquiries, the reviews and the recommendations that never seem to deliver on any of their promise.

And in the end what does it matter if we nod along anyway? You will press on without us, convinced of your moral imperative to tell us how to fix us. We are tired of the injustice and the brutality and fed up with the persistent approach that sees us isolated as bit players and afterthoughts in the configuration of our futures.

Louise Taylor is an Associate of the Indigenous Law Centre at UNSW Law and Deputy CEO of Legal Aid ACT.

This article was first published in The Guardian.