Elliott sat down with Mark Scott, Secretary of the NSW Department of Education, at UNSW Business School’s last Meet the CEO of 2016. 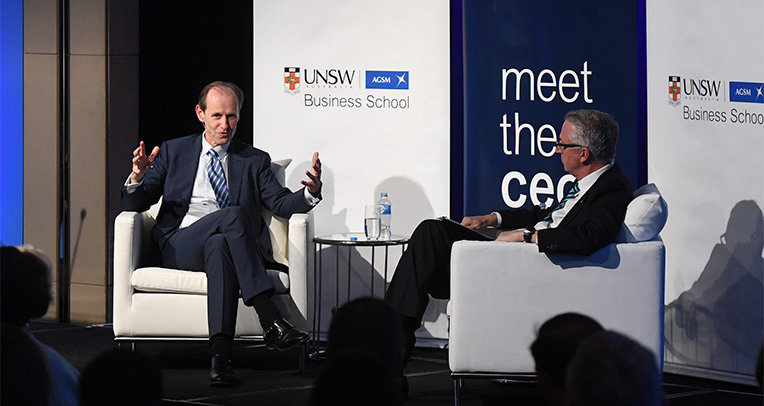 When Shayne Elliott took the helm of ANZ in January, some were not sure what to make of the new unassuming chief executive. His low key demeanour is a sharp contrast to his predecessor, Mike Smith, known for his larger-than-life personality. But for Elliott, being CEO is not a personality contest – it’s about communication. “What you need to be is an effective communicator. At the end of the day a lot of what a CEO does is communicate. And you’re communicating what you want people to do and there are different ways of doing that.”

Elliott sat down with Mark Scott, Secretary of the NSW Department of Education, at UNSW Business School’s last Meet the CEO of 2016. Shaped by a fiscally conservative father, New Zealand’s deregulation in the mid-1980s and a 20-year career at Citi, Elliott’s humble persona is outmatched by his depth of experience, considered approach, and commitment to remaking ANZ’s culture. Much of the interview was spent talking about just that, culture – from setting behavioural standards to fostering innovation to supporting the communities in which ANZ does business.

After it came to light that traders in ANZ’s markets division were in gross violation of the company’s code of conduct, the company made the decision to deal with it publically, sending a message to both employees and customers.

“We could have easily taken the soft option. We could have shoved some money their way and made them go away, but we said no. We need to deal with this and we are going to do it publically,” said Elliott. “We knew we were going to end up in the newspapers but we said that’s a good thing. It will send a signal to [our] 60,000 [employees].”

For Elliott, true cultural change requires “being really clear about what you expect and then backing it up in every single thing you do and making sure it is aligned with the culture you want to establish.”

Nowhere is this more apparent than in ANZ’s renewed approach to customer service and the role of banks in local communities. According to Elliott, banks have lost touch with their purpose and this has led to a divide between them and the communities they serve. But it can be overcome and ANZ is working towards that goal.

“If you think about how we talk, we talk about ROEs, numbers, sales and all those things. But that is not what we actually do. What we do is help people buy a home, help people start and run a business, and we help people hire more people, and save for their retirement,” explained Elliott. “And if we think about that every day, it changes the conversation internally, it changes what you care about, it changes the way you behave.”

This type of thinking has led ANZ to identify customer service as its differentiator – the main way it can set itself apart from Australia’s other three big banks. Understanding how ANZ can best engage with its customers is a winning strategy for Elliott.

Watch the full interview with Shayne Elliott of ANZ.