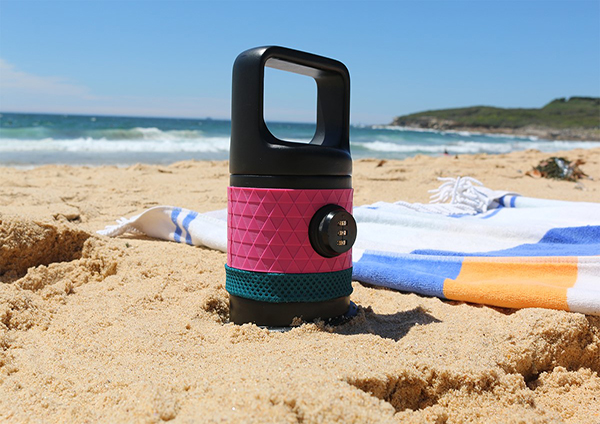 Jordan Rajek, from Cranbrook School, has invented an award-winning product that will keep your stuff safe at the beach.

Above: Jordan Rajek with his invention 'SandGuard' and certificate.

If you live in Australia, chances are you are a beach-goer. Families, friends and tourists flock to our beaches and with the warmer temperatures affecting all seasons it’s almost a year-round activity Leaving your personal affects unattended is a constant stress at the beach. Not anymore with Jordan’s invention, SandGuard. It’s a lockable cylinder big enough to hold keys, wallet, sunglasses and even a camera, which was Jordan’s inspiration, “I’m always at the beach either by myself or with a friend and we are in the water at the same time so we have to leave stuff unprotected. I love making films and have my GoPro at the beach which I don’t want to leave unsupervised as they are expensive.”

After Jordan saw a segment on Bondi Rescue on beach theft, he realised there’s no way to stop it. “There are lockers [at Bondi] but they are far away and you want your stuff with you. That’s when I thought about having a portable secure lockable pod like storage item”, he explains.

So, the SandGuard was born. You “screw” the SandGuard into the sand and it’s fitted with a car like alarm that alerts other patrons on the beach of a possible theft. If the perpetrator does manage to make off with your SandGuard it’s also fitted with a GPS tracker that you can see via an app.

At the Shape2016 awards Jordan won the Sustainability in Design Award which is sponsored by UNSW Built Environment’s Industrial Design degree. Director, Steve Ward, who was on hand to present Jordan with his certificate and $500 prize said, “Jordan has delivered a complete package. An idea that supports healthy outdoor activity and improves security. Understanding of materials and technology have been balanced with a focus on the human user and the context of use. Clever use of smartphone technology is employed and there is evidence of a path of exploration leading to a complete design that looks close to being viable for production.”

Jordan developed SandGuard throughout his HSC year during a class called Design and Technology. This class is taught in many secondary schools and all student’s works are automatically submitted to the NSW Education Standards Authority (NESA) for judging. This year 38 projects from Design and Technology, Textiles and Design and Industrial Technology students were recognised by the NESA judges as outstanding. All these projects are on display at the Museum of Applied Arts & Sciences until May 7th, 2017.

Checkout other videos produced by Jordan