Architects urge change in attitudes towards safety after Grenfell fire 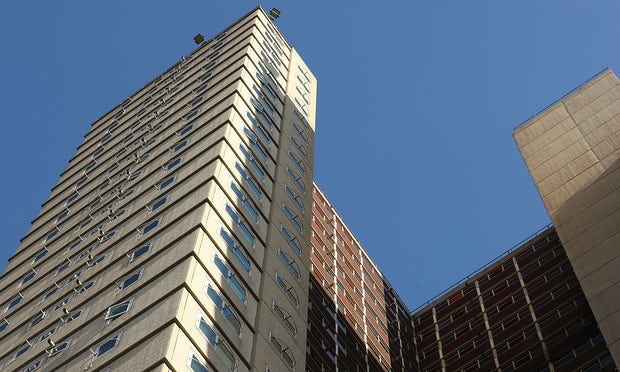 Those with experience of working in other countries have been highly critical of how fire safety is treated in UK.

Inflatable slides, expanding net chutes and spider-like rescue robots were some of the design ideas(pdf) that emerged in the aftermath of the terrorist attacks on the World Trade Center in New York in 2001, as part of attempts to make tall buildings feel safer. Others declared the event should mark an end to the age of towers altogether.

After the catastrophic fire at Grenfell Tower in west London this week, which killed at least 30 people, what does the future of tall residential buildings look like – if they have a future at all?

“It’s certainly not the end of tower blocks,” said Philip Oldfield, an expert on tall buildings, of the University of New South Wales, Sydney. “After the 9/11 attacks many people were saying it was the end of skyscrapers, but we’ve seen three times as many towers built since then than in the 120 years before. The Grenfell Tower tragedy is a watershed moment in terms of taking stock of how we refurbish our existing buildings, but it shouldn’t put us off building tall. We need more housing density and towers are a pretty efficient way to do it.”

He said the focus on elaborate evacuation methods prompted by 9/11 was a distraction from the real issue of making sure tall buildings are properly designed in the first place, with compartmentalised rooms, pressurised fire lobbies, dedicated firefighting cores and sprinkler systems. He said recent events should lead to a more performance-based approach to fire engineering, rather than treating the regulations as a box-ticking exercise.

“Fire safety shouldn’t be about testing materials individually but about how they work together, simulating how the building behaves in a more holistic way.”

After a series of fires recently, Dubai is introducing a new code for tall buildings this year that addresses exactly that, insisting that full-scale mockups of a building’s facade are fire-tested rather than just the individual materials. External sprinklers have been encouraged too.

Stephen Hodder, an architect and former president of Riba whose practice is working on a dozen tall buildings around the country, said the number of residential towers should continue to grow but the Grenfell fire should prompt a review of safety standards across the board.

“I anticipate we’ll see a review of the ‘stay put’ strategy and the logic of a single staircase in tall buildings, as well as a critical look at the length of escape distances,” he said. “But the re-evaluation of existing towers to make them compliant with current regulations should be the priority. Sprinklers should be mandatory. The great tragedy is that we have to have an event like this to make it happen.

Architects with experience of working in other countries have been highly critical of how fire safety is treated in the UK, and hope this week’s events will lead to fundamental change.

“The UK approach to safety seems to be about making a show,” said Nicholas Lobo Brennan, of Apparata. “Having seen how it works in other northern European countries, it appears that the UK attitude is about presenting a picture of safety, with every party trained to deflect risk and responsibility away from themselves.”

His partner Astrid Smitham, who studied and worked in Switzerland for several years, said she was concerned the response to Grenfell may be more bureaucracy rather than improved standards. “There’s a real danger that we will just introduce more things that are just visible signs of safety. ”

She said UK fire regulations insisted on corridors inside flats, “imagining them to be sterile safe zones between ‘dangerous’ rooms, totally ignoring the fact that they get crowded with everything from bikes to paper recycling bins. It’s an open secret. As long as it looks safe on the drawing and ticks the box, it’s deemed to be fine.”

What was needed more than ever, she said, were new high-quality apprenticeships and a chain of responsibility. “It isn’t the height of the building that leads to the danger. It’s about how people are trained and a general approach to health and safety. Contractors have to be responsible for what they do on a micro, physical level, not just on a broad paperwork level. At this kind of moment of crisis we need a fundamental overhaul from the ground up. The mistake would be to look at what we already have and simply add to it.”

This article was orginially published on theguardian.com/uk