Flicker to Flame: How I found my place at UNSW 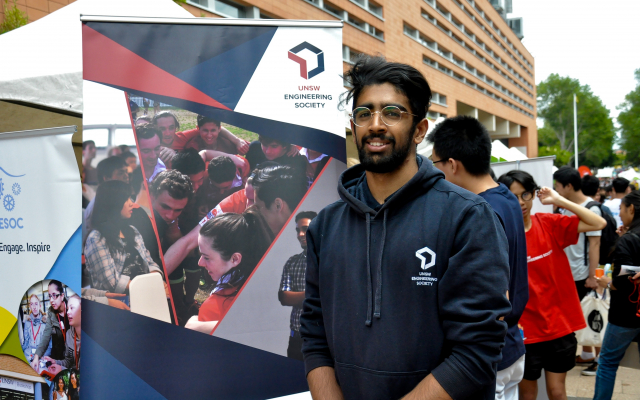 A shy, quiet and withdrawn student, Thilina De Silva’s approach to university life threatened to derail his whole experience until he saw a flicker of opportunity. The split-second decision he made next changed his life forever.

I’ve got a challenge for you… Ask yourself, right now, ‘What made me choose engineering?’

Was it because of your fascination in technology? Was it the opportunity to create something for your community? Or was it, like Elon Musk, because you wanted shoot a cherry-red sports car into space? 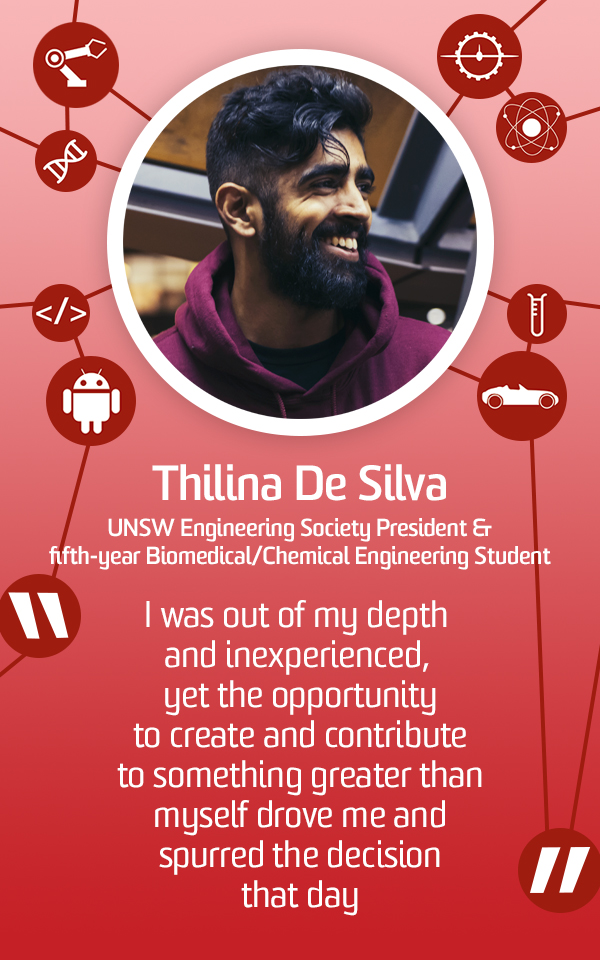 If you were to ask me that question when I first arrived at UNSW, I wouldn’t have had a clear answer. I would probably have been conflicted between saying, ‘It was because my ATAR was just good enough to get me into this prestigious degree’, and, ‘As a child of immigrant parents, it’s my inherent duty to get a good job.’

As you can tell, my initial reasons don’t really reflect that of a passionate engineering student; but today, four years after walking on campus for the first time, I may not be able to tell you why I choose engineering, but I can definitely tell you what made me stay.

Often quiet and shy, my first semester passed by in a pretty meek manner. I moved to Sydney from Newcastle and with very few familiar faces around me, finding my place was arduous and exhausting. I was oblivious to what was happening on campus. I was closed-off and often elected to go back to my college room rather than spend time outside on a one-hour break. My first year became monotonous and draining, devolving into a cycle of going to class, studying and sleeping. Whether opportunities to socialise or develop were there or not, I rarely recognised them and even more rarely did I take them.

Since that time, I’ve started to think that opportunities appear as a mere flicker in front of you, and you can’t experience the heat unless you grab it in the moment. My deeper involvement in university life began in such an instance, when I accompanied a friend to the Biomedical Engineering Student Society’s (BESS) AGM. Originally, I only went there to vote but in a split-second decision I decided to run for the position of second year representative. I was out of my depth and inexperienced, yet the opportunity to create and contribute to something greater than myself drove me and spurred the decision that day.

In 2015, BESS became the first community I genuinely found comfort in. My gradual growth in confidence to voice myself in meetings, feeling a part of a team and the small contributions I began to make to the biomedical community were irreplaceable experiences and hugely formative to my development for the next couple of years.

Similarly, my journey in the UNSW Engineering Society (EngSoc) started two years ago when I decided to run for the 2016 team. The next opportunity came knocking in 2017, when I became EngSoc’s first Social Vice President. That was where I unearthed a hitherto unknown great passion to innovate and establish a social culture for all engineering students to be a part of.

Witnessing students experience the fruits of this vision was momentous for me, and laid the foundation to establish a greater vision as president for EngSoc this year. In this role I’m 100% focused on creating a society where students can learn about and experience the full range of UNSW engineering opportunities and culture at the highest possible calibre. When I look back, the root of all of this was that fateful decision I made at the BESS AGM three years ago.

If I’ve learned anything from my time at UNSW it is this: pay attention to those mere flickers and join the societies that spark your interest. You might find yourself living or working overseas, designing a world-record-holding solar car, or even researching a cure for a deadly virus. Wherever you find yourself, you can be sure it will be expanding your overall understanding of how working with people and leading a team contributes to the role of an impactful engineer in the world.

I have also learned the importance of balancing it all out by concentrating on my friendships. There will be camps and parties, and the annual engineering ball to cap off the semester. The friends you make in your first and subsequent years at university may last a lifetime.

As Elon Musk once said, “I could either watch it happen or be a part of it”. So, grab the wheel. Like Elon’s cherry red sports car, your engineering degree is firing you into the vast unknown with your theme song blaring behind you. The journey is scary, overwhelming, yet beautiful and one day you will find something out there for you. Opportunities are everywhere, so don’t let them pass by you. Slow down to take in the sights, but never stand still.