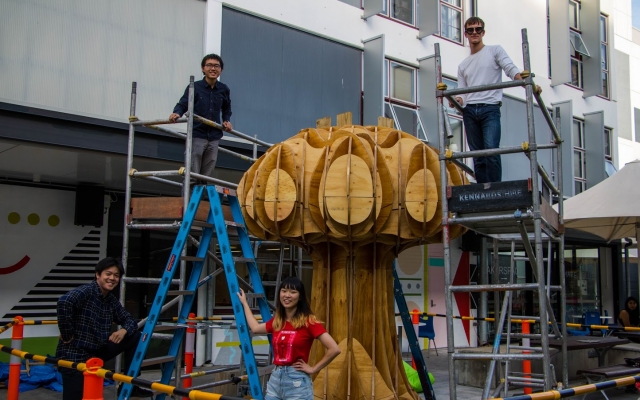 Get yourself down to Circular Quay and celebrate an artwork celebrating friendships forged at UNSW at this year’s Vivid Sydney festival.

Celebrating its 10-year anniversary this year, Vivid Sydney is without a doubt one of Sydney’s most loved festivals. The event transforms buildings and landmarks all over the city into a living, moving canvas of light and last year attracted more than 2.3 million visitors. Let me say that again – this time with all the zeros – 2,300,000. 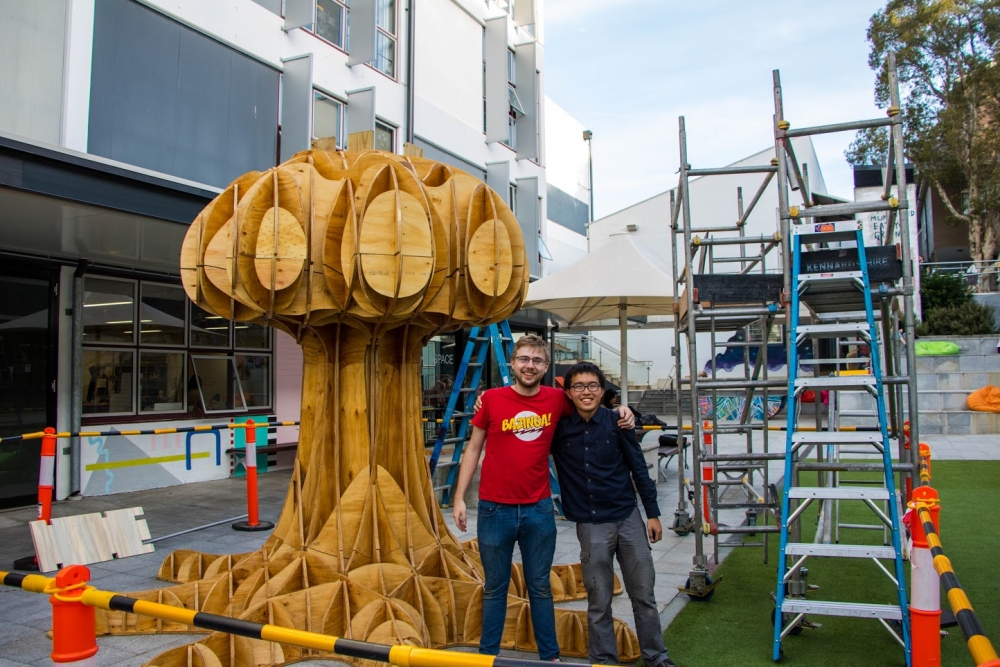 Woah! Just imagine how great you’d feel if that type of foot traffic clapped their eyes on an art installation that you had been part of creating.

This happy prospect is a happy reality for the UNSW team Project Illuminate, whose installation, Synergy, will be displayed in Circular Quay during the three-week festival starting 25 May. (Project Illuminate is a sub-group of the student-led project CREATE UNSW with support from its sister club Make Club UNSW at the University’s Art and Design campus.)

Synergy looks much like a scenic representation of nature. A stylised tree surrounded by similarly stylised ferns but, explains Junji Moey, the scene is deceptively simple and actually represents a complex superorganism.

“The artwork originated from the idea of celebrating the many friendships that have been forged in CREATE over the years,” explains Moey, a third year Mechatronic Engineering and Computer Science student who is a Co-Director of the project.

“Clubs like CREATE offer students a space to socialise and form genuine connections. The continual re-appearance of members allows the community to sustain itself. We felt that the Vivid Light program would be an excellent platform to express this idea to the greater public,” he continues.

As people move along the path towards the centre of the installation the nearby ferns light up and die down as if following the passage of these visitors. “This is to demonstrate how inconspicuous microorganisms are absorbed into and play a key role in the survival of a greater being,” explains Daniel Li, fourth year Electrical Engineering and Computer Science student and acting President of CREATE.

Vivid is a wonderful opportunity to show what university students are capable of when we channel our energies into a project.

“In the face of categories and divisions such as race, socioeconomic status and nationality, we wanted Synergy to remind us of our common humanity, and that the healthy functioning of society, represented through the complete illumination of ferns, is only possible through a deep consideration of others,” he says.

Both Li and Moey have been involved in a leadership capacity in Illuminate since the project’s inception in August 2017, and although it’s been a long journey to get here, both are thrilled to see it finally coming together. “I feel really proud to see how far it has come since we first started talking about it last year,” says Li.

“Although I have not been involved in the structural or electrical design of Synergy, my role has primarily been handling budget decisions, acquiring funds and making sure project deliverables are met on schedule. Perhaps not so glamorous as the actual design and build, but absolutely essential elements for any successful project,” he continues.

“As the project Co-Director, my work has been primarily managerial in nature and involves designing and quality testing the artwork from an engineering perspective, and also organising human resources and purchases around the build schedule,” says Moey.

CREATE was founded in October 2012 as a student-led project and maker club. The philosophy of the group is grounded in the idea of collective knowledge, learning and cooperation as an effective way to expand the realms of possibility for any individual wanting to work in the technical sphere. There are around 2,000 members from across the University, 20 of which put their hands up to be core makers on Synergy and their backgrounds cover a wide variety of different areas such as artistic design, modelling, architecture, structural engineering, electrical engineering and programming.

So, are they looking forward to finally turning the lights on at Circular Quay later this month? Hell yes! “Above all, we are excited and honoured to delight people with our technical and artistic efforts and also to put our name out there,” says Li and he is eagerly seconded by Moey.

“For prospective and current members, Synergy is a wonderful opportunity to show what university students are capable of when we channel our energies into a project. Our involvement in Vivid demonstrates CREATE’s potential in the realm of public art and installation. Plus, it's a lot of fun. There's always that,” he says.

Special thanks to our key sponsors Destination NSW and UNSW Faculty of Engineering, as well as UNSW Art and Design who provided the facilities to build Synergy.

Additionally, Illuminate would like to extend our gratitude to all the volunteers on the Synergy project and for CREATE’s Sales Stall. All proceeds from this stall go straight into supporting projects such as this.

Check it out!
Synergy will be showcased at Circular Quay nightly from 6pm to 11pm between 25 May and 16 June. Get out there and check out this amazing FREE Event.