New dawn for UNSW solar as sun shines on next generation 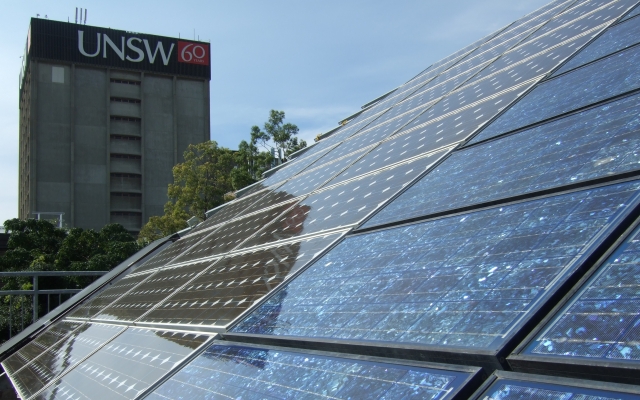 UNSW Engineering continues to set the pace of the world’s solar energy development as three rising stars are acknowledged for their achievements in research.

Last month, three young UNSW researchers from the School of Photovoltaic and Renewable Energy Engineering (SPREE) were recognised globally for their work with a 40 Under 40 award.

The trio, Associate Professor Bram Hoex (39), Dr Brett Hallam (32) and Dr Alison Ciesla (32) were among the top 40 people under 40 years of age attracting significant attention around the globe for their advances in solar technology.

A/Professor Hoex’s research into improving cost-effectiveness of silicon-based solar cells was what brought him into contention for the award. His work involved reducing the losses at the front and rear surface of the solar cell, both the contacted as well as the non-contacted regions by applying nanoscale thin films on the silicon surfaces.

“Nanoscale thin films can also be used to extract electron or ‘holes’ selectively, and these kinds of contacts are now enabling world-record solar cell efficiencies,” he said.

Dr Hallam’s work continues on from the groundbreaking work of the late Professor Stuart Wenham in advanced hydrogenation, aiming to improve the performance of silicon cells by eliminating or minimising defects in the cell materials.

“A key defect that I have been working on is a boron-oxygen complex that, ironically, forms under sunlight and can reduce performance by 10 per cent,” Dr Hallam said.

“I have been using atomic hydrogen that is naturally introduced in the solar cell during fabrication, to attach to the defects and electrically neutralise them.”

Dr Ciesla works in the same team as Dr Hallam and has also been involved with the work on hydrogenation.

“The other area of my research is laser doping and plating of metal contacts to improve efficiencies of commercial cells while reducing costs, as used in Suntech Power's PLUTO cells,” she said.

Dean of UNSW Faculty of Engineering Mark Hoffman says the three SPREE academics thoroughly deserve the recognition and prestige that comes with the 40 Under 40 award.

“Bram, Brett and Alison are rising stars and the future of Australia’s continued leadership in renewable energy technologies. They have made great progress in their fields and have shown why UNSW leads the world in solar research.”

“I’m very pleased for them to be recognised in this way and look forward to what they can achieve at the university in years to come.”

Interestingly, no other organisation had as many of their up-and-comers among the 40 Under 40 winners as did UNSW SPREE.

This suggests that even beyond the advances in this field made in UNSW labs from the mid-1970s onwards, the depth and talent coming through the ranks bodes well for UNSW’s continued status as world leader in solar research.

UNSW’s solar technology development has, over the years, spurned a thriving solar energy industry, and its impact is now being felt by end consumers.

Once seen as a status symbol or an expensive hobby, solar panel installation is now seen as a realistic and affordable way to beat the ever-increasing electricity prices, which has not gone unnoticed by business. Only this year, businesses outstripped residential properties in the demand for rooftop solar installation in Australia.

While there still might be a way to go until solar is no longer viewed as ‘alternative’, the story of UNSW’s involvement in its development is synonymous with two giants in research: Scientia Professor Martin Green and the late Professor Stuart Wenham. 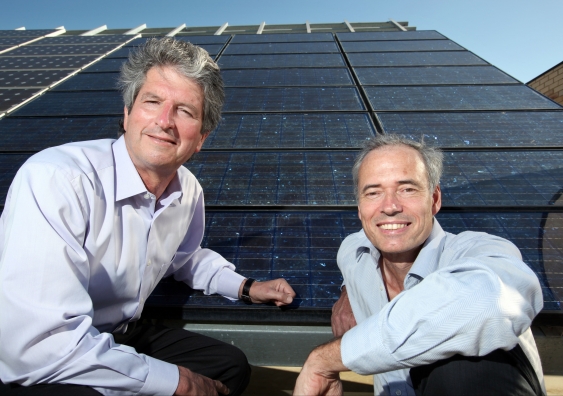 Professor Green first made his name establishing a number of solar cell efficiency records, but is perhaps best known for his invention of the PERC solar cell (Passivated Emitter and Rear Cell) in 1983. The late Professor Wenham, the great innovator, developed advanced hydrogenation passivation technology, helping to iron out defects in solar cells which has allowed efficiency of solar cells to be boosted a hundredfold.

The upshot of the effect of these two visionaries’ work has been a reduction in costs of production and an increase in solar cell efficiency.

In turn, as these breakthroughs were taken up by industry, the benefit to businesses and consumers has meant lower solar energy prices and photovoltaic (PV) electricity becoming a viable and clean alternative to the burning of fossil fuels. The PV industry today is valued at more than 100 billion dollars globally and is one of the fastest growing sectors.

UNSW’s SPREE has had an additional influence on the solar cell industry, providing the training ground of the industry’s best and brightest.

Shi Zhengrong was a notable example, studying under Professors Green and Wenham and assisting with the development of thin-film cells CSG (crystalline silicon on glass) at UNSW in the 1990s.

When Mr Shi returned to China in 2001, he founded Suntech Power and brought in Professor Wenham as chief technology officer. With Professor Wenham’s input, Suntech quickly became the biggest producer of solar cells in the world, and Mr Shi the world’s first solar billionaire.

Only time will tell how the next generation young guns of solar will make their marks.