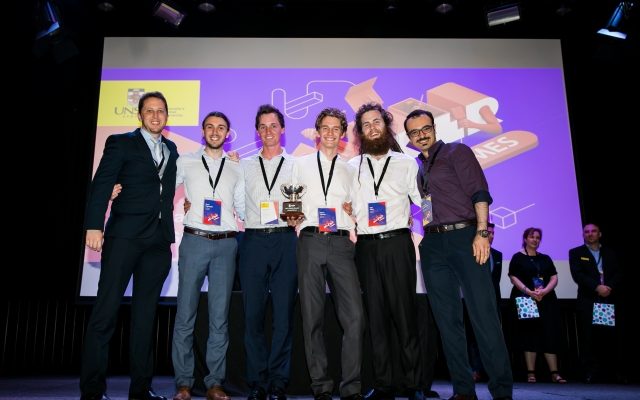 A robot that cleans and paints a navy ship while in dry dock is this year’s winning idea in UNSW Sydney’s Maker Games. 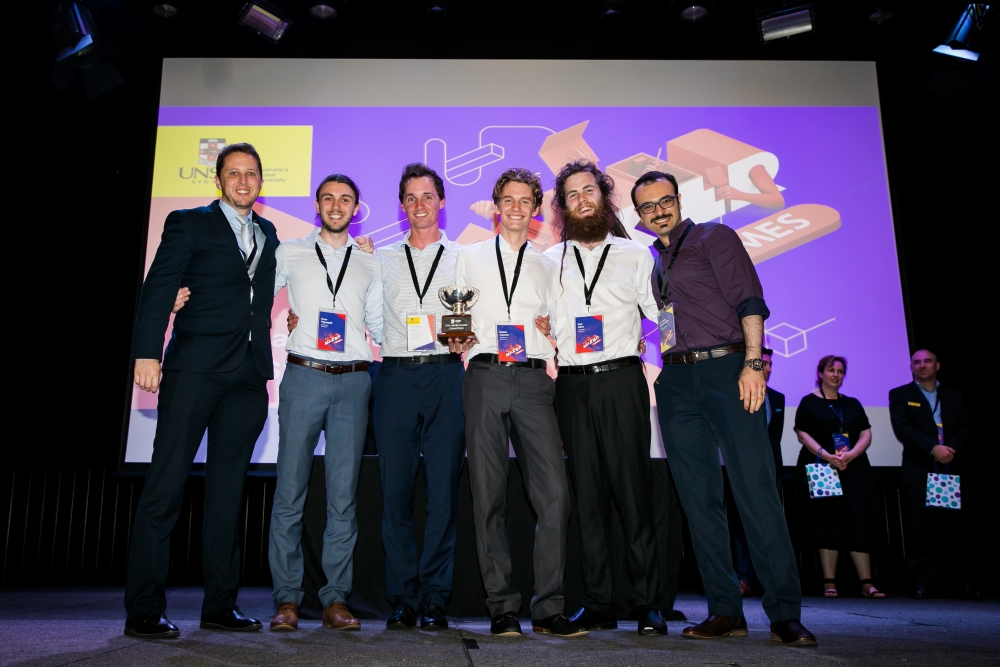 Now in its second year, the Maker Games Final Showcase last night at UNSW’s Round House wowed the audience with prototypes made by budding engineers, inventors, entrepreneurs and designers to solve real-world problems set by industry partners.

Event winners Team Arash responded to the challenge set by a mentor from defence industry group BAE Systems to come up with a way to make the cleaning and painting of naval warships a cheaper, safer and more efficient process.

After months of brainstorming, bouncing ideas, tinkering with models and seeking advice from academic and industrial mentors, they emerged with AMAR – Autonomous Magnetic Attraction Robot.

“The robot is designed using magnets to attach to the side of a steel vessel, and then we added high pressure water which was simulated with hose nozzles and paints which could then be used to clean and paint the ship,” said team member Evan Pignatelli.

During their pitch to the judges, the team put AMAR through its paces in a simulation of the robot working on a ship’s exterior. AMAR appeared to be a compact, flat box on four discreet wheels, about the size of a dinner tray, that moved autonomously back and forth along a makeshift ship’s hull that was set up on stage at an acute angle.

The team said conventional cleaning and painting of a naval ship involves having the vessel lifted into dry dock while many maintenance workers toiled in often dangerous conditions in a long and arduous process that costs $250,000 a day.

AMAR would require only one person per device to oversee its operation, and as well as eliminating danger, would reduce the maintenance bill by millions of dollars per ship.

The four winning members of Team Arash – Tom Grimes, Evan Pignatelli, Edwin Lipman and Kiel Allen – will be flown to California’s Silicon Beach, the tech hub of the western beach suburbs of Los Angeles, where they will network with leading engineering and design organisations over the course of one week.

Runner-up in this year’s Maker Games was Team Whipper Snappers who responded to a challenge put to them by 5B Solar. Their task was to find an easier way to stop grass from interfering with solar panels in an outdoor installation at ground level where panels were just 200mm above the ground.

UNSW Engineering is ranked 27th in world rankings of engineering schools, of which there are about 7000 in the world. I can see tonight why our reputation is so formidable.

Team Whipper Snappers’ solution was to design a new kind of autonomous lawn mower, one that was wider, flatter and had three sensors.

Highly commended in the Maker Games was Team Riveract who designed a flash flood alert system powered by social media and publicly available weather data that provided six hours’ notice to people in flood-prone villages in Myanmar. Also highly commended was Team Erudite, who designed a system that could accurately measure and record data about the exact position of the pilot control stick in an aeroplane, allowing this data to be used more accurately for flight-simulator training.

Associate Dean (Industry and Innovation) at UNSW Engineering, Professor Ian Gibson said he was impressed with how each of the 14 groups zeroed in on the mechanical, digital, electrical or computational requirements to arrive at highly original solutions to these real-world problems.

“It was great to see the diversity of the teams tonight. I would particularly like to acknowledge our friends from other faculties, like Art & Design,” he said.

“UNSW Engineering is ranked 27th in world rankings of engineering schools, of which there are about 7000 in the world. I can see tonight why our reputation is so formidable.”

UNSW President and Vice-Chancellor Professor Ian Jacobs was also in attendance and awarded the prize to the winners.

“This represents the very best of what I would call UNSW as an exemplar of generosity and partnership,” he said.

“It’s a wonderful example of people coming together.”

Project Officer for The Maker Games Kevin Duquette said a personal highlight was seeing students who didn’t make it onto the winners’ podium still walk away with some great industry connections.

“Some students told me they have already received an internship offer,” he said.

“I also heard that industry players are wanting to immediately negotiate IP, while external companies have expressed an interest in working with specific student teams.”