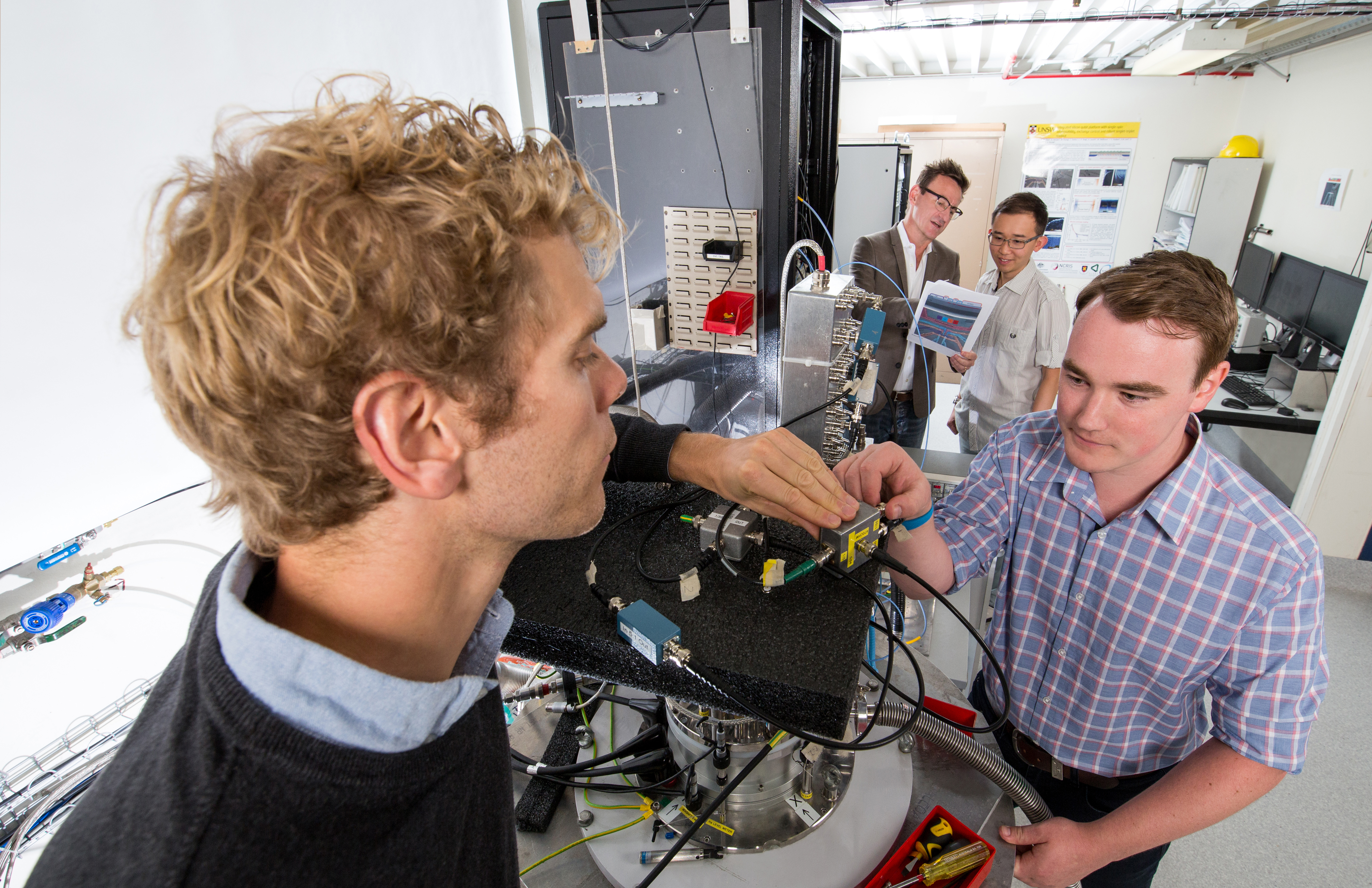 Two fundamental quantum techniques have been combined by a UNSW team in a integrated silicon chip for the first time, confirming the promise of using silicon for quantum computing.

Quantum computers that are capable of solving complex problems, like drug design or machine learning, will require millions of quantum bits – or qubits – connected in an integrated way and designed to correct errors that inevitably occur in fragile quantum systems. Now, an Australian research team has experimentally realised a crucial combination of these capabilities on a silicon chip, bringing the dream of a universal quantum computer closer to reality.

They have demonstrated an integrated silicon qubit platform that combines both single-spin addressability – the ability to ‘write’ information on a single spin qubit without disturbing its neighbours – and a qubit ‘read-out’ process that will be vital for quantum error correction. Moreover, their new integrated design can be manufactured using well-established technology used in the existing computer industry.

The team is led by Scientia Professor Andrew Dzurak of UNSW Sydney, a program leader at the Centre of Excellence for Quantum Computation and Communication Technology (CQC2T) and Director of the NSW node of the Australian National Fabrication Facility.

Last year, Dzurak and colleagues published a design for a novel chip architecture that could allow quantum calculations to be performed using silicon CMOS (complementary metal-oxide-semiconductor) components – the basis of all modern computer chips.

In their new study, published today in the journal Nature Communications, the team combine two fundamental quantum techniques for the first time, confirming the promise of their approach.

Dzurak’s team had also previously shown that an integrated silicon qubit platform can operate with single-spin addressability – the ability to rotate a single spin without disturbing its neighbours.

They have now shown that they can combine this with a special type of quantum readout process known as Pauli spin blockade, a key requirement for quantum error correcting codes that will be necessary to ensure accuracy in large spin-based quantum computers. This new combination of qubit readout and control techniques is a central feature of their quantum chip design.

“We’ve demonstrated the ability to do Pauli spin readout in our silicon qubit device but, for the first time, we've also combined it with spin resonance to control the spin,” says Dzurak.

“This is an important milestone for us on the path to performing quantum error correction with spin qubits, which is going to be essential for any universal quantum computer.”

Lead author Michael Fogarty, who performed the experiments as part of his PhD research with Professor Dzurak at UNSW, says: “Quantum error correction is a key requirement in creating large-scale useful quantum computing because all qubits are fragile, and you need to correct for errors as they crop up.”

But Fogarty notes this “creates significant overhead in the number of physical qubits you need in order to make the system work”.

Dzurak says: “By using silicon CMOS technology we have the ideal platform to scale to the millions of qubits we will need, and our recent results provide us with the tools to achieve spin qubit error-correction in the near future.

“It’s another confirmation that we’re on the right track. And it also shows that the architecture we’ve developed at UNSW has, so far, shown no roadblocks to the development of a working quantum computer chip – and, what’s more, one that can be manufactured using well-established industry processes and components.”

Artist's impression of a silicon chip for a spin-based quantum computer. On the top are mostly standard CMOS components; while below that, quantum bits are in operation. (Illustration: Tony Melov)

Working in silicon is important not just because the element is cheap and abundant, but because it has been at the heart of the global computer industry for almost 60 years. The properties of silicon are well understood and chips containing billions of conventional transistors are routinely manufactured in big production facilities.

Three years ago, Dzurak’s team published in the journal Nature the first demonstration of quantum logic calculations in a real silicon device with the creation of a two-qubit logic gate– the central building block of a quantum computer.

“Those were the first baby steps, the first demonstrations of how to turn this radical quantum computing concept into a practical device using components that underpin all modern computing,” says Professor Mark Hoffman, UNSW’s Dean of Engineering.

“Our team now has a blueprint for scaling that up dramatically.

“We’ve been testing elements of this design in the lab, with very positive results. We just need to keep building on that – which is still a hell of a challenge, but the groundwork is there, and it’s very encouraging.

“It will still take great engineering to bring quantum computing to commercial reality, but clearly the work we see from this extraordinary team at CQC2T puts Australia in the driver’s seat.”

Operating out of new laboratories at UNSW, Silicon Quantum Computing Pty Ltd (SQC) has the target of producing a 10-qubit demonstration device in silicon by 2022, as the forerunner to creating a silicon-based quantum computer.

The work of Dzurak and his team will be one component of SQC realising that ambition. UNSW scientists and engineers at CQC2T are developing parallel patented approaches using single atom and quantum dot qubits.

In May 2018, the then Prime Minister Malcolm Turnbull and the President of France, Emmanuel Macron, announced the signing of a Memorandum of Understanding (MoU) addressing a new collaboration between SQC and the world-leading French research and development organisation Commissariat à l'Energie Atomique et aux Energies Alternatives (CEA).

The MoU outlined plans to form a joint venture in silicon-CMOS quantum computing technology to accelerate and focus technology development, as well as to capture commercialisation opportunities – bringing together French and Australian efforts to develop a quantum computer.

The proposed Australian-French joint venture would bring together Dzurak’s team, located at UNSW, with a team led by Dr Maud Vinet from CEA, who are experts in advanced CMOS manufacturing technology, and who have also recently demonstrated a silicon qubit made using their industrial-scale prototyping facility in Grenoble.