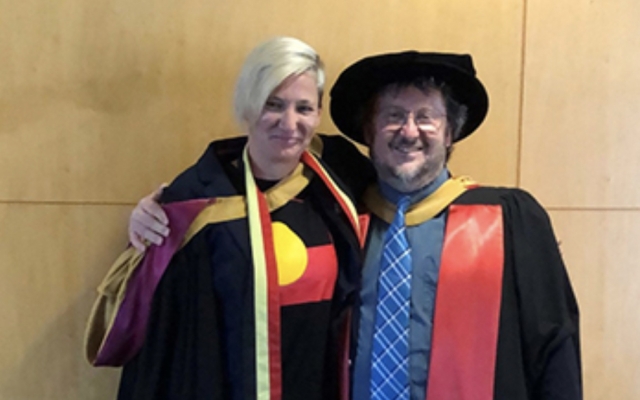 Rachel McVittie proves through hard work, guts and determination that engineering, and ultimately society, benefit from more diversity and egalitarianism.

We acknowledge that the land we walk on is Gadigal land. We pay our respects to elders past, present and emerging.

The Faculty of Engineering would like to loudly applaud the astounding achievements of its first indigenous female engineer.

Rachel McVittie is a Martu woman who first walked the hallways of CVEN six years ago. After completing a Tertiary Preparation Certificate at TAFE, she was admitted to Engineering on her ATAR score. She freely admits that, prior to her TAFE enrolment, she could hardly read or write.

To walk these hallways was particularly daunting: entering a world where no indigenous woman had gone before. Looking back, the people she will miss most are the CVEN professional staff. Rachel lost her dear mother whilst studying, and so it has been both a sad and a triumphant time to graduate. The professional staff handled her journey through grief gently, in a culturally sensitive and re-assuring manner.

The other team of people Rachel loves is from Nura Gili, the UNSW Indigenous Programs Unit, who gave Rachel a home in an intimidating world. She is now a Nura Gili ambassador herself, helping younger Aboriginal students feel empowered.

Rachel found herself attracted to construction. It is on work sites she has found not only the means to utilise theory, but life lessons in sustainability, egalitarianism and the clarity to define an indigenous perspective on land and water use.

One of Rachel’s core beliefs is egalitarianism. “I come from a community where we were all poor, so we were all equal,” she says. “At universities we could let go of the idea that if we restrict access, entry is more prestigious. Let’s share the knowledge.”

This belief in equal access and equal worth guides her behaviour.

“On site I get on with the labourers best,” she says.

“Many engineers might not ask a labourer for help or information, but if you want to estimate how much concrete is needed, how much to order, then ask the guy who pours the concrete. It saves time and money and reduces waste. Often engineers don’t touch the materials and estimate from a distance.”

Another firmly held belief is diversity. “Lack of diversity is traditional,” Rachel says. “Women and indigenous kids want to do engineering but are put off by a belief that you have to be a maths genius. You don’t. I’m proof of that. Indigenous kids struggle with self-belief, as I did. They confuse disadvantage and trauma with lack of intelligence. Even when I got into uni, I constantly felt I had to prove that I was worthy of my place.

It has become part of Rachel’s mission to teach young disadvantaged people that the road to success is not about inherent brilliance, but hard work. She tells the students she mentors: “Put the phone away. Treat study like a nine-to-five job. Do the readings, do the work. Listen.”

Rachel has been accepted into a two-year engineering graduate program and she is delighted. Whatever her future employment looks like it will need to provide the flexibility for outreach, because she intends to be active about the lack of indigenous and female voices in engineering.

She not only wants to help solve ongoing tensions in indigenous communities, but also articulating what an indigenous perspective could bring to engineering and the broader society.

Engineering is an intellectually rigorous activity, “but it can be very black and white. It needs to be. I don’t want an engineer designing a bridge on how they feel, but this can mean we don’t debate enough, we don’t discuss other thought processes. Skills like empathy and negotiation are under-valued,” Rachel says.

“We cannot solve indigenous issues until indigenous people are working on them together. There is a way to hold on to our past if we are the ones building our future.

“Aboriginal Australians prize the environment more than any engineering project. In this dollar driven world there are Aboriginal communities that could teach the rest of us so much about sustainability.”

Rachel has been too busy studying to feel proud of her achievements, but her recent graduation ceremony did allow some reflection.

“It was such an incredible day and everyone was so happy. I had so much support: even some of the labourers from my very first work placement came. Head of School Stephen Foster said ‘we are expecting big things from you’. It was nice that he acknowledged my ability,” she says.

To Professor Foster, Rachel says “thank you for creating a safe and supportive learning environment not just for Indigenous students but for all disadvantaged students”.