Law, business and banking experts on the UNSW Legal Hour panel said the significant findings of the banking royal commission would be met with a slow response. 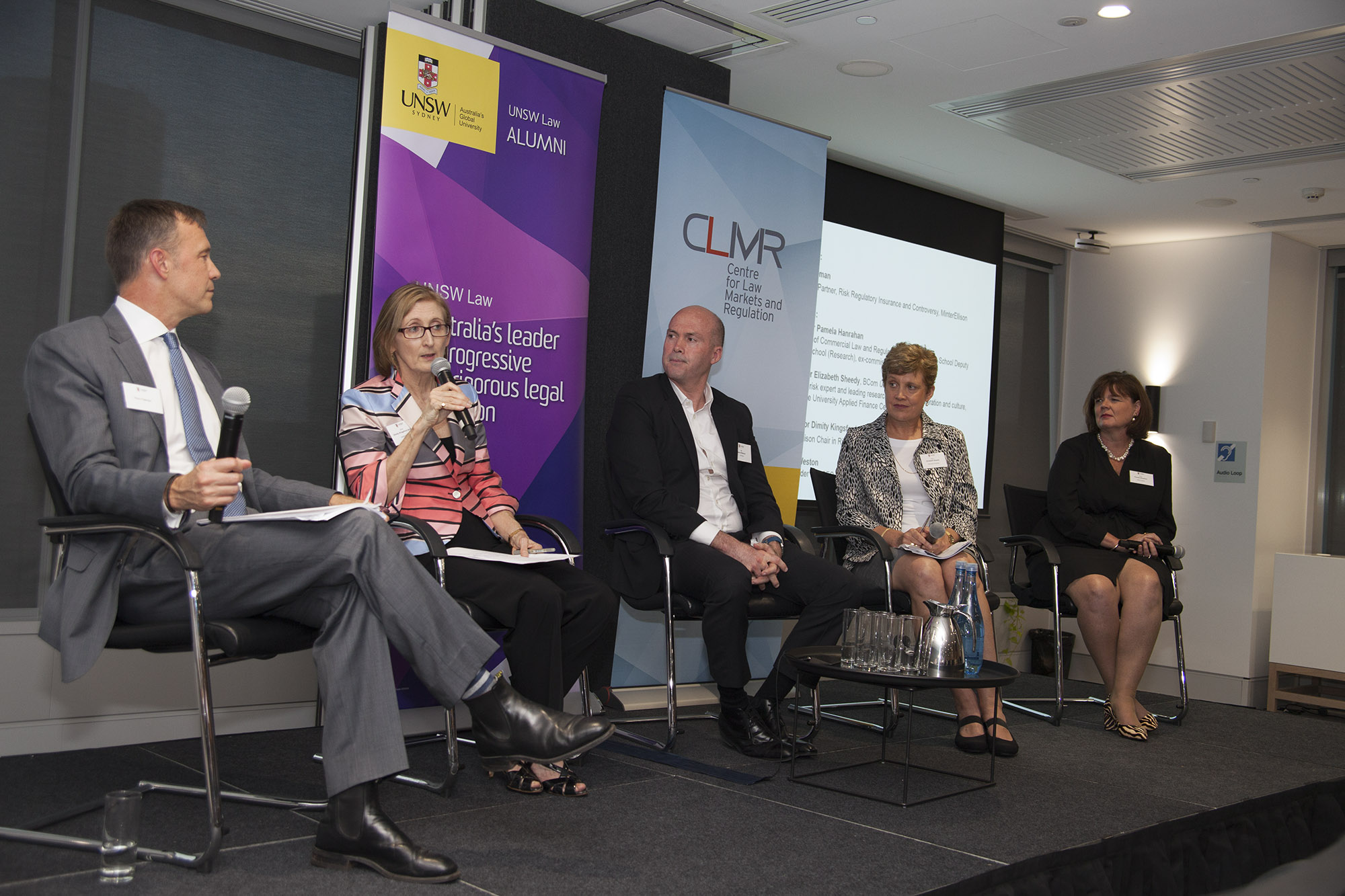 The findings of the banking royal commission were "a crisis of rules" and it would take 10 years for regulatory authorities to adequately regulate the industry, a UNSW Law Alumni event heard this week.

Four experts from banking, business and law on the Legal Hour panel spoke about the Royal Commission into Misconduct in the Banking, Superannuation and Financial Services Industry Final Report at MinterEllison on Tuesday night.

"I hope that whoever forms government after May will take up the recommendation of the Law Council to appoint a proper Law Reform Commission to look at the state of financial services law in Australia and not make this a political football, or more ad hoc law, which is why we’ve got to the point where we are at the moment," Professor Pamela Hanrahan, Professor of Commercial Law and Regulation at UNSW Business School, told the gathering.

Risk management expert at Macquarie University’s Applied Finance Centre, Professor Elizabeth Sheedy, said that while it was a good idea that the Australian Prudential Regulation Authority (APRA) was now charged with more supervision of culture and remuneration, it would be a long time before it could do that effectively.

"I think it could take 10 years to get to the point where they’ve got adequate resourcing and, even when they get to that point, you can’t expect too much from regulation," she said.

"If people are determined to get around regulation, they’ll find ways of doing it."

Customers in the spotlight

Steve Weston, a financial services and wealth industry expert and CEO of digital banking licence holder Volt Bank, said the findings of the commission were a cultural and leadership challenge that "would be a good vehicle for the banking industry, as painful as it is".

Referring to when he was CEO of Barclays Mortgages in the UK around the time of the Libor (London Interbank Offered Rate) scandal, Mr Weston said: "When the time came to make a decision that would favour shareholders and customers, I would have typically erred on the side that favoured the shareholder."

But he said that by 2016, after the implementation of the Senior Manager Regime in Britain, "what the [bank] directors wanted to know was: had you cleaned up the sins of the past and have you put steps in place to prevent a reoccurrence in the future?"

"The returns went down accordingly, and I think we have that challenge to play with, but it will be a long job," Mr Weston said.

Professor Sheedy said shareholders would now have to see that misconduct to customers "actually hurts them".

She suggested this might happen via significant penalties to shareholders and genuine reputational damage.

Professor Dimity Kingsford-Smith, holder of the MinterEllison Chair in Risk and Regulation, and Deputy Director (Research) of the UNSW Centre for Law, Markets and Regulation, said there needed to be "a change in the cultural approach to customers, a change in governance and greater clarity in bank leadership about what the purpose of the bank is".

But Professor Sheedy said cultural change for the banking and financial services industry was going to be "remarkably difficult".

"There’s a whole consulting industry out there of people who purport to run cultural change programs, and the dirty truth is that 75% of them fail," she said.

"The reason you get cultural change is when the external environment changes … when the accountability regime comes in … that’s the one thing that gives me a sense of optimism."

But a big difficulty in getting long-term change was "maintaining the rage in Canberra".

"[The problem is] keeping everyone’s attention for long enough for the cultural change to take place, including the people who finance the regulators and set the tone and political debate about policy in this sector," she said.

Professor Hanrahan said one of the biggest changes is the shift in the enforcement posture of the Australian Securities and Investments Commission (ASIC), which had been given a $17m funding boost and which had made "significant changes to its internal governance in the last 12 months".

ASIC’s new penalties will become law in March, she said, "and that includes the power to obtain civil penalties against individuals in the order of a million dollars".

There were also very significant increases to penalties for corporations, with the maximum penalty "now in the order of $500m".

Changes to regulatory cooperation between APRA and ASIC

Professor Kingsford Smith said one of the biggest challenges for APRA and ASIC was achieving the recommendation that they coordinate over regulation.

"They have radically different styles of regulation, different levels of enforcement expertise, and there’s also the complication with information sharing," she said.

"If APRA has information about a jointly regulated entity that it feels it can’t share with ASIC, then likely the powers to share information are restricted."

Professor Kingsford Smith said the final report stated that "the ultimate responsibility [for non-financial risk] lies with the board and management".

Professor Hanrahan said that courts would now make orders that can’t be reimbursed by banks for unlawful conduct, including for dishonest conduct, and failing to take care then exposing the bank to reputational damage.

"So, the involvement of individuals in corporate misconduct has always been something that’s capable of being pursued, but I think the appetite to pursue that will be even more now."