Counting the costs of the major parties' climate change policies

UNSW sustainability scientists have run their rulers over the major parties' climate policies to determine whether taking action against climate change is more expensive than doing nothing.

Climate change has emerged as the issue most likely to determine the result in the upcoming federal election. It is no longer the exclusive concern of the ‘latte left’, with more conservative voters than ever before now listing it as a major election issue.

At UNSW, we recently developed an integrated macro-economic simulation model (iSDG-Australia) capable of projecting the future impacts of a range of policy and investment scenarios, including additional policies to address greenhouse gas emissions.

There are clear differences in the proposed responses to climate change from the major political parties. We can now model how these different policies affect Australia’s economy and greenhouse gas emissions trajectories in the future.

The Coalition Government has committed to the Paris Agreement by setting a national target to reduce greenhouse gas emissions by 26-28% below 2005 levels by 2030. This represents a target level of 441 million tons of carbon dioxide equivalent (Mt CO2-e).

The latest projections from the Department of Environment and Energy reveal that Australia is not on track to reach this target. In fact, emissions are projected to increase marginally over the period to 2030. Given the Coalition is still in power and has not released any substantive change in climate change policy ahead of this election, let us call this the ‘Business-As-Usual’ scenario.

Labor, on the other hand, has released a more ambitious greenhouse gas emissions reduction target of 45% on 2005 levels by 2030. To achieve this, Labor has set out a suite of policies in its Climate Change Action Plan. This includes a target of 50% renewables by 2030, a target of 50% of electric vehicles in new cars sales by 2030, doubling energy productivity by 2030 and improving emissions standards, among other measures.

Not surprisingly, the Greens have set an even more ambitious target of 63-82% reduction in emissions on 2005 levels by 2030.

These more ambitious targets have sparked an explosive political row regarding the potential costs of addressing climate change to the economy and jobs.

Modelling commissioned by the Government from the economist Brian Fisher concludes that Labor’s emissions target would subtract at least $264 billion from gross national product by 2030, or up to $542 billion depending on how it’s implemented. A minimum of 3% reduction in real wages and 167,000 fewer jobs are also predicted.

These findings have been vehemently criticised by experts and Labor for relying on inaccurate assumptions and failing to consider the economic costs of inaction on climate change.

The model we developed is a powerful tool to explore potential development pathways for Australia to achieve the global Sustainable Development Goals and other international targets.

We used the model to explore potential impacts of some of Labor’s key climate policies on the economy, jobs and greenhouse gas reduction as compared with the Coalition’s business as usual scenario. 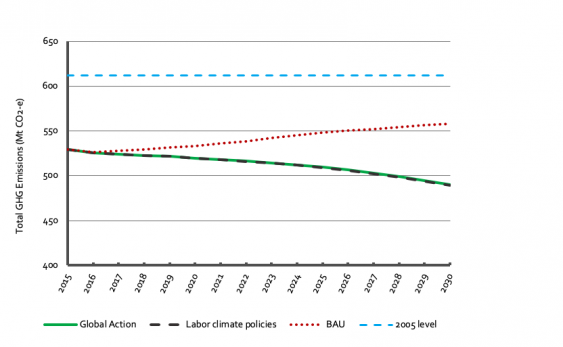 For the purposes of illustration, we ran three simple scenarios:

In terms of greenhouse gas emissions (Figure 1), the BAU scenario sees a reduction of only 8.8% on 2005 levels by 2030. In fact, emissions are projected to increase over the period to 2030, reducing gains made prior to 2015. But when adopting three of Labor’s proposed climate policies, a 20% reduction in emissions is projected by 2030 – or just under half of Labor’s total emissions reduction target.  This represents some progress on emissions reduction, but also highlights the transformational challenge ahead in reaching Labor’s 45% reduction target or the Greens 63-82% target by 2030.

In terms of impacts on Australia’s economy and jobs (Figures 2-4), the model projections reveal little or no impact from Labor’s policies on GDP growth, GDP per capita, or employment over the period to 2030.

If we factor the reduced impacts of climate change that would result from similar global action to reduce greenhouse gas emissions, then the outcome for the economy and jobs is favourable – including a 0.7% increase in real GDP and GDP per capita.

Figure 4. Australia's projected employment to population ratio from 2015 to 2030 under three scenarios.

Figure 5. Australia's projected unemployment rate (%) from 2015 to 2030 under three scenarios.

While this modelling simulates only some components of Labor’s climate change policies and is based on several model assumptions, it highlights that the impacts of inaction on climate change for both Australia’s economy and jobs outweigh the costs of reducing emissions.

Looking beyond 2030, the negative impacts of climate change are projected to become more severe, reinforcing the need for rapid emissions reduction strategies in Australia and globally. It is therefore critical that the costs of inaction are also factored into modelling and decision making on climate change.

Cameron Allen is a PhD candidate specialising in sustainable development with UNSW’s School of Biological, Earth and Environmental Sciences.

Associate Professor Tommy Wiedmann specialises in sustainability research with the School of Civil and Environmental Engineering.