Australia needs a Robin Hood carbon tax – this was one of the bold proposals debated by academic and industry leaders in tax during the Festival of Outrageous Tax Ideas conference on Thursday. 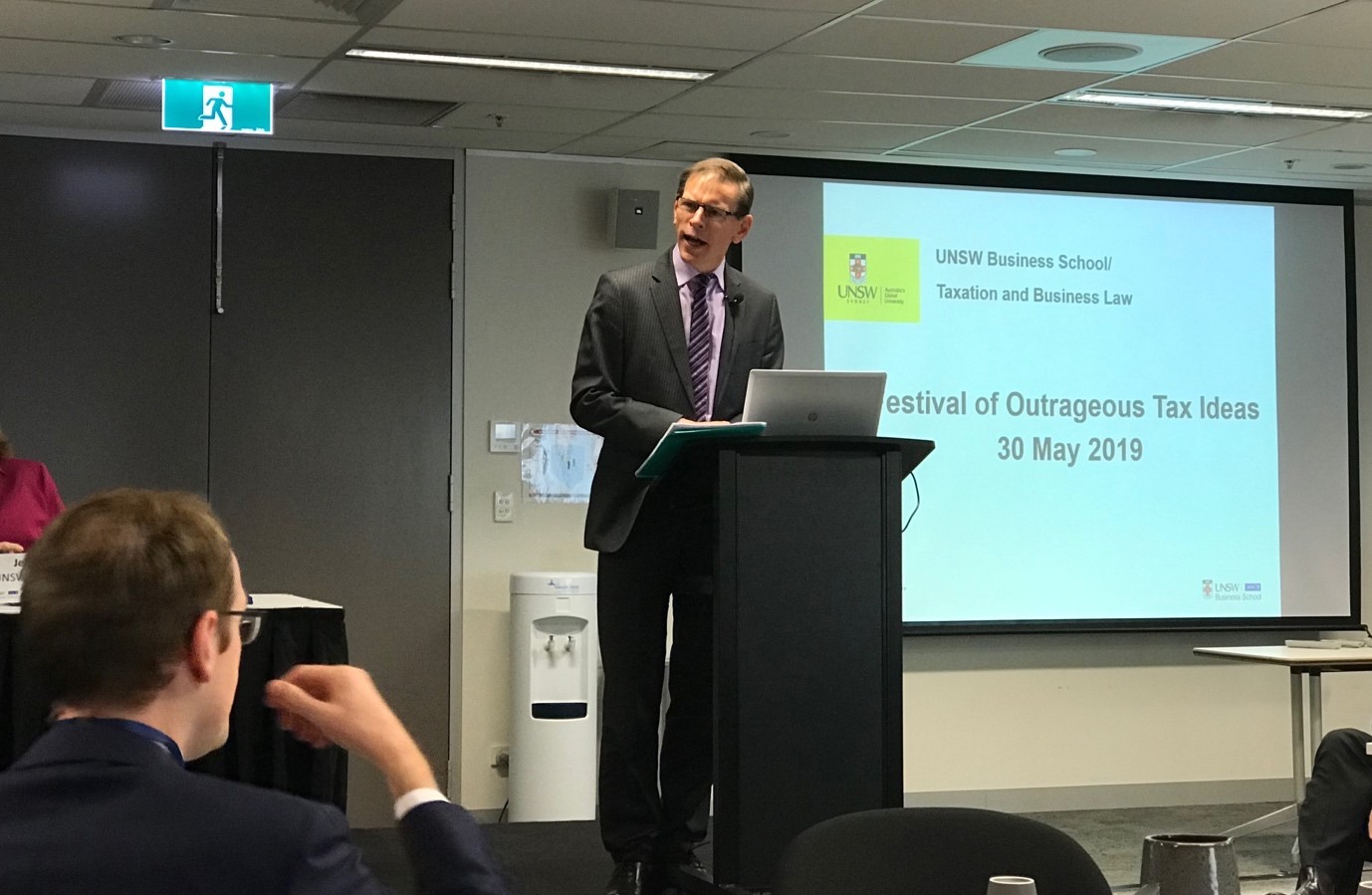 Australia needs a Robin Hood carbon tax – this was one of the bold proposals debated by academic and industry leaders in tax during the Festival of Outrageous Tax Ideas conference on Thursday.

The plan, which would charge a $50 tax per tonne of carbon and leave voting-age Australians $585 better off per annum, was contested by Richard Denniss, Chief Economist at the Australia Institute.

Mr Denniss said the idea was not politically pragmatic.

“If the idea is, we’ll write a check to enough people and they’ll want to do it, and rational voters would vote for it… great, that’s one theory,” he said.

“But if you look at the weekend’s election results, northern Tasmania, in Tasmania – the poorest state in the country… the poorest region, just swung to the Liberals.

“One party was offering free childcare and free healthcare if they got cancer, the other was offering tax concessions on investment properties, and two seats went to the coalition.

Professor Dixon responded saying we should be careful about confusing economics with cultural anxiety.

“We need to be very very careful if we are interested in progressive ideas, not to quickly read the election as suggesting a certain kind of impossibility on ideas,” she said.

“People vote in a way that is activated by a mix of economic and cultural anxieties and I think that’s what we saw at the last election.

“When we’re pushing big ideas that have economic dimensions, I don’t think we should be insensitive to the cultural anxieties as part of the story.”

The debate on a carbon dividend system was just of the outrageous ideas presented at the Festival.

Held for the third time since 2015, experts from UNSW Business School, academics from other universities and senior industry professionals provoked new thinking for the future of taxation in Australia.

Hosted by the School of Taxation and Business Law, this year attracted the biggest turn out since the inaugural Festival, with 85 registered attendees.

Professor John Taylor, chair of the organising committee, spoke on the importance of having different viewpoints about tax.

“We want to put ideas out there to raise the level of debate and allow people to have different viewpoints on innovative ideas in a civilised discussion,” he said.

“This is an event that tries to bring together industry, academics and government – the people who contribute to the process of policy development.”

“Outrage presents us with opportunities to think about things in different ways, to look for innovative and creative ways of dealing with the problem,” he said.

At each of the sessions, an ‘Agent Provocateur’ presented their disruptive idea which was then addressed by a panel of expert commentators from academia and industry, and opened to a Q&A from the audience.

Outrageous idea 1: A wealth tax should fund a basic income in Australia

A basic income is possible in Australia by implementing a wealth tax, proposed a panel chaired by UNSW Professor of Practice Jennie Granger – former Commissioner and Director General at Her Majesty’s Revenue and Customs.

“You can finance a generous universal basic income with a moderate flat tax rate on wages and a wealth tax on assets,” Professor Miranda Stewart from the University of Melbourne said.

“It would be quite redistributional… and would shift people out of poverty.”

Professor Gigi Foster from UNSW Business School said a universal basic income was like a solution looking for a problem.

“Australia at the moment has a very targeted tax and transfer system, so we very effectively target people who are in need,” she said.

“If we were to move from that sort of system to a system that more equally distributes, it is a reverse Robin Hood thing... and is essentially regressive.”

Outrageous idea 2: Double the base not the rate of the GST

Agent Provocateur Michael Evans, founder of Taxsifu, said broadening the base is necessary because the GST was not meeting budget gaps in the states.

“The GST is simply not providing enough revenue to the states no matter how you split it up.”

Contesting the outrageous idea, Peter Davidson, Principal Advisor at the Australian Council of Social Service (ACOSS), said taxes on income and land are better ideas to increase public revenue than the GST.

“The GST is a moderately efficient revenue source for the state and federal governments, it’s not a magic bullet and it’s not a substantially more efficient base than a comprehensive income tax base,” he said.

“Shifting the tax mix towards consumption is regressive with little economic payoff.”

“Climate change is a moral challenge and also an economic one,” Professor Dixon said.

“There would be a $50/tonne tax on every tonne of carbon, done at the point where it enters the economy,” Professor Holden said.

Underpinning the plan is the idea that people become shareholders in the environment and have a moral responsibility to be stewards of the shared natural wealth.

Richard Denniss, Chief Economist of The Australia Institute, said we need to remove distorting taxes that encourage pollution instead of putting in a carbon tax.

“If we wanted to rely heavily on market-based instruments to transition the Australian economy to reduce greenhouse gas emissions… the first thing would be to reduce perverse subsidies that encourage people to pollute,” Mr Denniss said.

“We live in a country that subsidises new coal mines…diesel fuel construction, logging.”

Professor Neil Warren from the School of Taxation and Business Law at UNSW Business School said integrity in any tax comes down to having good data.

Professor Warren is leader in the tax field, he is current advising State revenue agencies on the tax gap and has had significant involvement in consulting for government agencies and committees.

“The issue with land is trying to pin down who’s got what,” he said.

“With good land tax design, you have to start with the data and then build up – things like ownership, area and value… are fundamental.”

Michael Warlters from the NSW Treasury posed the question: why tax land? “If you tax something discretionary you can change that behaviour,” he said.

“If you tax land, you can’t escape that land tax.”

The day concluded with a plenary session discussing tax reform and how to implement outrageous ideas.

Panellists proposed that tax reform could be simple but needed to remove politics from the process.

“Tax reform is particularly hard in Australia because we’ve got the three-year term of office and because we have an obstructionist upper chamber,” Professor Chris Evans said.

“Tax is politics with a dollar sign in front, so my outrageous idea would be to remove the politics. We do it with monetary policy… why can’t we begin to think about doing the same for fiscal policy?

“Make fiscal policy so far as we can independent of government and let the government… set the parameters and objectives of tax reform.”

One panellist concluded we have the tax system we want and deserve – an “outrageous” idea which echoed some of the sentiment of the day.