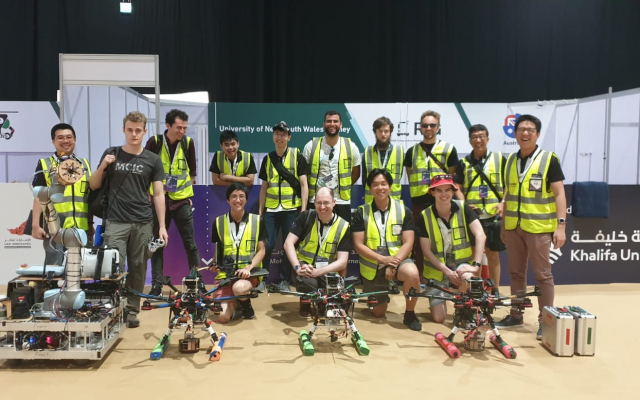 UNSW’s Competitive Robotics team has beaten 20 teams from universities around the world to take equal second place in the urban fire-fighting challenge, at the Mohamed Bin Zayed International Robotics Competition (MBZIRC) in Abu Dhabi this week.

The team of 12 undergraduate engineering students and industry mentors beat many of the world’s leading robotics groups, comprised mostly of postdoctoral and PhD students. UNSW was also the only Australian team that qualified for the event, which consisted of four “challenges” focussed on the role of robotics and artificial intelligence in “smart city” solutions.

“We are ecstatic,” said James Horsley, a fourth year mechanical engineering student. “This is such an amazing moment for the team, many whom have worked towards this moment for the last two years. To have done so well in the firefighting challenge means a lot given the horrendous fire season we have just had back home.”

The team had to program their aerial and ground vehicles to work together to locate and then extinguish simulated building fires. Eight “fires” were set up and teams earned points according to the amount of water their drones could dump on the flames to extinguish them, up to a maximum of 1000ml per fire.

Dylan Sanusi-Goh, a third-year mechatronics engineering student and operations manager for the UNSW team said: “The competition is extremely difficult. We had to do some really complex programming to get the drones to fly outdoors. We only managed to put out one of the fires, pouring 1000ml onto it. But we were so close to winners, who were just 2.75 points ahead of us, using an extra 275mls of water to partly extinguish a second fire.”

The UNSW team also entered a construction challenge, where the robots had to locate, pick, transport and assemble different types of brick-shaped objects to build pre-defined structures. They narrowly missed out on a place in this contest.

Senior lecturer in mechatronics Dr Mark Whitty, who has mentored the competitive robotics team at UNSW for the past 13 years, commended the students on their results. He said: “To beat many of the world's leading robotics groups, comprised of teams of postdocs and PhD students, is a testament to amazing skill levels within the UNSW team. I am extremely proud of what they’ve achieved.”

Mr Sanusi-Goh said: “I think this has given all of us a taste of what work is going to be like once uni is done. It’s not always fun, but we’ve all learned to work well together, as a team, to achieve an amazing result. We’ve got some great memories and lessons to take with us when we begin our careers.”