Impressions from the IAS in Princeton

Professor Fleur Johns shares her thoughts on the unexpected and intangible nature of achievements garnered during her time at the Institute for Advanced Study in Princeton. 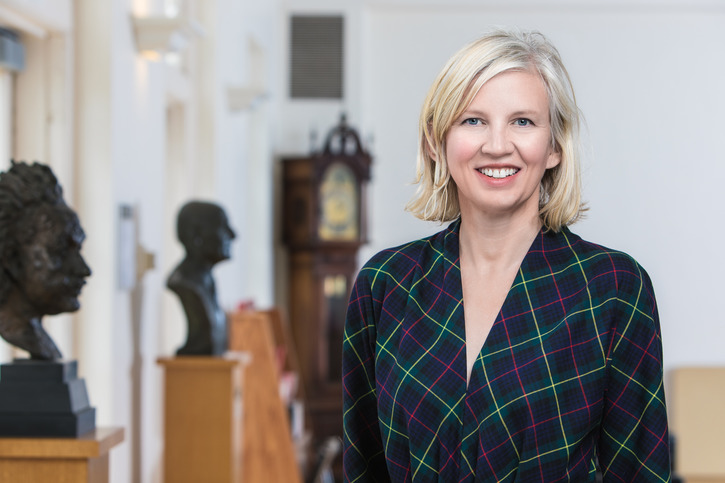 In 1930, the Institute for Advanced Study (IAS) in Princeton was established with just 23 members. Albert Einstein was appointed as one of the Institute’s first professors. It is now one of the world’s leading, independent centres for curiosity-driven basic research across four schools: historical studies; mathematics; natural sciences; and social sciences.

Fast forward to 2020, the number of permanent faculty remains small (44, including professors emeriti), but there are now more than 8000 scholars who form part of the Institute’s alumni community. Every year, around 200 members from over 30 countries are invited to be resident at the IAS to conduct research. In 2019-20, Professor Fleur Johns from UNSW Law has been a member of the IAS School of Social Sciences, where she has been among some 30 anthropologists, economists, historians, political scientists and sociologists carrying out research with reference to the school’s theme for the year: ‘Economy and Society’.

“It is an honour and one for which I’m very grateful” says Professor Johns.

“My research over the past decade has entailed more and more dialogue and collaboration with scholars in other disciplines. For that reason, the IAS made sense as a place for me to carry on my research.

“I am a legal scholar, working in international law, socio-legal studies, law and technology, and legal theory. However, my last book – on dam development in the Lower Mekong River Basin – was a jointly authored monograph with a group of political geographers and legal scholars with whom I had conducted fieldwork over several years.”

Similarly, in her current project, she is working with a co-investigator in UNSW Computer Science, Associate Professor Wayne Wobcke.

“I’ve become used to – and have indeed come to like – the feeling of being out of my comfort zone, working with scholarly strangers. That is, people with expertise in other disciplines, and/or people working in other parts of the world to my own.

“The IAS School of Social Sciences is, I think, a place for scholarly strangers with overlapping curiosities and concerns to find a temporary home, so it’s been a wonderfully stimulating place to work.”

While at IAS, Professor Johns is continuing work on an ARC-funded investigation of the efforts of international organisations –particularly the United Nations (UN) – to explore potential legal and political ramifications of using unstructured digital data, such as satellite image data, anonymised mobile phone data and social media data in development and humanitarian work.

“A range of prototypes are being developed and initiatives are underway to consider how you could employ these kinds of data to supplement official statistics – for example, official pricing or poverty statistics – to assist in disaster relief efforts or routine development assistance programs.”

Professor Johns says information and communication technology companies are increasingly being cast as major players in the humanitarian field or seeking to position themselves in that light.

“Governments, especially cash- and data-strapped governments in the Global South, are considering ways they can tap into digital data streams to help support public functions like census-taking.

“This is a vast and variegated global field. By paying close attention to one particular field site within the UN system, and following its investments, collaborations and outputs, we aim to shed some light on a part of it.”

Professor Johns has been working on a new book manuscript at the IAS (co-authored with Caroline Compton), as well as a few other shorter pieces on this topic. And her time at the IAS gave her new opportunities to exchange ideas around these projects. In November 2019, for example, she participated in an invitation-only workshop co-hosted by the School of Mathematics and the School of Social Sciences at the IAS, on the social and ethical challenges of machine learning.

“I’ve certainly made headway. However, like everyone in the current moment, parents of young kids and people with other significant care responsibilities especially, I have had to rethink research and life plans en route. In view of the global pandemic, I cut my time at the IAS short and returned to Australia months earlier than planned. Nonetheless, I now realise that the most important ‘achievements’ garnered during my stay will be non-tangible and non-instrumental, such as having gained some new people to write and think with – both those met in person and those to whose writings I have been newly introduced by IAS colleagues.

“There is also the tank-filling effect of having read quite a lot, both in my area of research and well outside it; the value of stepping outside the environs in which I usually work and revisiting my research from an external vantage point; the insight gained into other research environments and the challenges faced by students and colleagues working in these, and actions being taken to try to address these,” says Professor Johns.

“All these are important gains, albeit ones that won’t be turning up on my CV. That said, I can’t claim to have entirely freed myself, during my IAS stay, from conventional, careerist aspirations of a scholarly sort – that would be unbearably sanctimonious.”

The one thing Professor Johns did not expect to do at the IAS was to dance.

“Walking in the Institute Woods (589 acres of woods, wetlands and farmland abutting the IAS campus); engaging in serious, challenging conversations; reading and writing a lot: I was looking forward to all that. But dancing was not something I anticipated doing here.” Yet at the Midwinter Party and on at least one other occasion before, the IAS community really turned out on the dance floor.

“And the energy, enthusiasm and abandon with which everyone did so was infectious. I’m speaking here of good contagion, rather than the kinds of contagion with which we have more recently become preoccupied. Dancing is, for me, the stuff of some serendipitous memories from my time at the IAS.”