I can't breathe: the suffocating truth of Australia’s race relations

As #BlackLivesMatter protests echo around the world, Australia must address the lack of accountability for its own Indigenous deaths in custody, UNSW experts say. 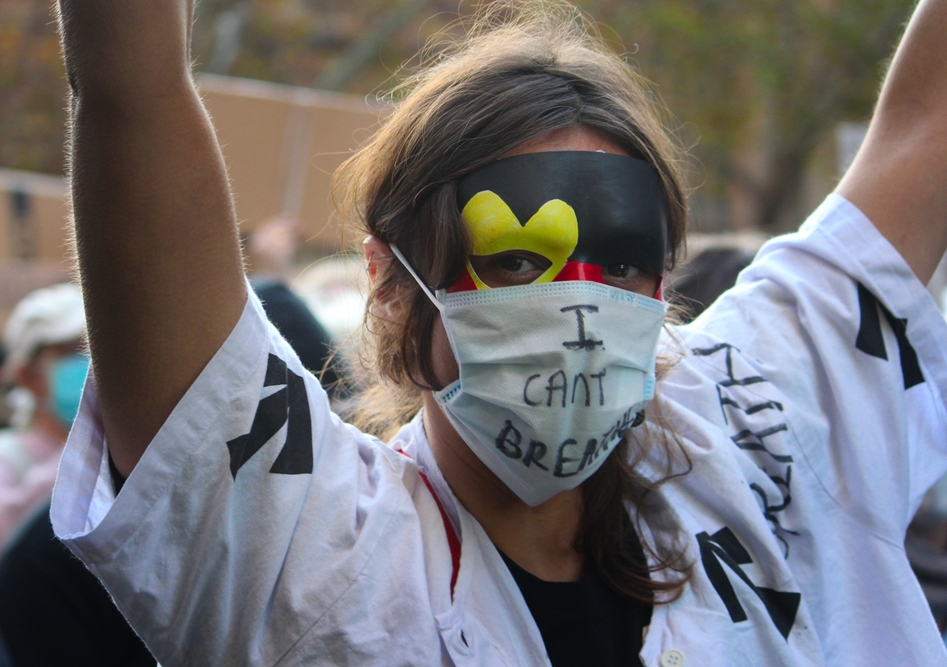 “There is a complicity and perceived normality in Indigenous deaths at the hands of police and prisons,” she says. “Rather than acts of violence, Indigenous deaths in custody are considered the result of co-morbidity within the public consciousness.

“And so Indigenous death and suffering is naturalised; Indigenous people live only by the benevolence of their gaolers.”

Indigenous deaths in custody are receiving unprecedented attention with thousands of Australians flaunting social distancing advice over the weekend to join the wave of global protests sparked by the death of George Floyd during his arrest by Minneapolis police.

The 46-year-old African-American father of two, who was suspected of passing a counterfeit $20 bill, died while police officer Derek Chauvin knelt on his neck for nine minutes. He was unarmed and restrained, and repeatedly said “I can’t breathe”.

For Australian protesters, wearing facemasks with the words ‘I can’t breathe’ across their mouths also resurrects the memory of David Dungay Jr’s death in custody in Australia in 2015. The 26-year-old Dunghutti man passed away while being restrained by five prison guards despite saying “I can’t breathe” 12 times before losing consciousness.

Mr Dungay, who had diabetes and schizophrenia, was in Long Bay jail hospital when guards stormed his cell after he refused to stop eating a packet of rice crackers. He was moved to another cell, restrained face down and twice sedated before he died.

On ABC’s Q&A, his mother, Aunty Leetona Dungay, posed this question to the panel: “My son David Junior was killed in very similar circumstances. He was pushed down into the ground by heavy officers.

“David cried out ‘I can't breathe’ many times in the space of his last nine minutes … we know we have a long fight ahead to get justice so I am asking the panel will you join us to demand charges are laid on the people responsible for my son's death?”

While the charge against US officer Derek Chauvin has been elevated to second-degree murder, and the other three officers implicated in George Floyd’s death now face charges of aiding and abetting murder, none of the officers involved in David Dungay’s death have been held accountable.

In November last year, NSW deputy coroner Derek Lee found Mr Dungay did not pose a “security risk”, and that it “was neither necessary nor appropriate for David to be moved”. However the guards’ conduct was deemed the “product of misunderstanding” and “systemic efficiencies in training”, so no disciplinary action followed.

The coroner attributed the cause of Mr Dungay’s death to cardiac arrhythmia, noting pre-existing health conditions, but cited “expert evidence [that] also established that prone restraint, and any consequent hypoxia [or loss of oxygen to cells and tissues], was a contributing factor although it is not possible to quantify the extent or significance of its contribution”.

This lack of accountability retraumatises “those who have lost someone inside”, says Ms Whittaker. “This has a devastating and enduring effect on families’ mourning. Unfortunately the process is protracted for many of these cases and a lack of justice is commonplace.”

Despite Australia’s mandatory legal review into every death in custody or police presence, few charges are laid. Ms Whittaker’s PhD thesis looks at Indigenous deaths in custody, following on from her previous research.

“In my 2018 pilot study looking at 134 Indigenous deaths in custody since the Royal Commission into Aboriginal Deaths in Custody, coroners considered referring just 11 deaths to prosecutors, but only ended up referring five. Of these, only two made it to court and neither resulted in charges being laid.”

With the renewed international focus on #BlackLivesMatter, Mr Dungay’s family have again requested the New South Wales Attorney General ask the director of public prosecutions to investigate whether charges could be laid against the prison officers involved in his death.

The contemporary community groundswell could assist their chances of having the case reconsidered, Ms Whittaker says. “Prosecution or referral seems to come only from cases where First Nations families have strong public advocacy behind them and strategic litigation resources beyond inquest legal aid.”

However the support of a mobilised general public in these kinds of cases is rare and even then comorbidity is prioritised over violence or neglect in causal investigations, she says.

“When state actors and systems are blamed through anecdotes, it is for their failure to intervene in tragedies that apparently spiralled out of nowhere. They are not blamed for deliberately depriving people of care, nor for weaponising indifference in circumstances of total control.

“Perhaps unsurprisingly, no one is blamed for the policies that entrap Indigenous people inside in the first place. Coroners contribute to the same blameless fatalism that has long underscored Australia’s Indigenous policy.”

The colonial stain on Australia’s race-relations

As a settler colony, like the US, Australia has a blindspot when it comes to violence against First Nations people, Ms Whittaker says. “We need to ask ourselves why accountability for Indigenous deaths in custody is so rare and what the legal and structural barriers are to this.”

Suppression of information (for example the identities of officers charged) and non-publication orders sought by state parties in coronial inquests, can preclude public advocacy, she says. The threat of subjudice contempt, when media coverage could pose a prejudicial threat to a potential trial, also silences families and prevents their public pursuit of justice.

With trials typically stretching out, family members are often unable to openly discuss the loss of their loved one over several years. In David Dungay’s case, the coronial inquest took almost four years. During that time it did not feature heavily in the media.

“Many Australians know more about police and prison violence in America, than police brutality towards Indigenous people and the high frequency of Indigenous deaths in custody here,” Ms Whittaker says.

Today Show’s US correspondent Alexis Daish’s comments to American protestors last week are testament to this: “I really appreciate you giving your perspective, mate, because people in Australia don’t have the understanding of the history of police killings and things here,” she said.

Some 437 Indigenous Australians have died in custody since 1991. “That’s more than one a month for what constitutes almost three decades. This speaks to the systemic nature of the problem,” Ms Whittaker says.

“Investigations surrounding the cause of death in prisons can have a great impact for our grieving families to at least get an account of what happened to our loved ones in the absence of our care,” Latoya Rule writes.

“It can also raise the spotlight on the behaviours of correctional and police officers – like those that piled atop of my brother’s body.”

Latoya Rule’s brother, Wayne Fella Morrison, a Wiradjuri, Kookatha and Wirangu man, died at 3.50am in the Royal Adelaide Hospital. He was arrested on remand, but hours before he was due to appear in court an altercation with two guards in his cell escalated.

12 guards wrestled and pinned Mr Morrison to the ground in a nearby corridor as shown on CCTV footage. His hands and legs were cuffed, a spit hood placed over his head, and he was carried by a group of officers in a prone position into a prison transport van.

For the three-and-a-half minutes he spent in the back of the transport van with four officers there is no CCTV footage. The guards have taken the matter to the SA Supreme Court in an  attempt to avoid testifying before the inquest into Mr Morrison’s death, or to even speak with investigators on the grounds of penalty privilege.

So far, they have not been successful in claiming the blanket privilege.

The need for civic education

In response to the first case, the NSW Police Commissioner Mick Fuller said the police officer whose history was otherwise “unchequered” was perhaps having “a bad day”, and that “someone who made a mistake shouldn’t be sacked after making such a commitment to the community”.

In the second instance, while the strip search was deemed unlawful by the police watchdog, the Law Enforcement Conduct Commission, no disciplinary action was recommended.

“These kinds of cases highlight a colour blindness in our justice system,” says Dr Kyllie Cripps from UNSW Law, whose research looks at Indigenous family violence with a focus on facilitating improvements in service responses.

“The #BlackLivesMatter protests provide us with a much-needed opportunity to reflect on Indigenous experiences of the justice system in Australia. George Floyd’s experience showcases the potentially lethal nature of First Nations’ encounters with law enforcement,” the Scientia Fellow and Pallawa woman says.

“We need to grasp the opportunity to increase the civic’s knowledge in this country. Australians need to understand that they are obligated, that they have a responsibility to get involved when Indigenous lives are lost.”