UNSW scientists have shown in mice that eosinophils, a type of immune cell, could be important in activating a type of fat that burns energy instead of storing it. 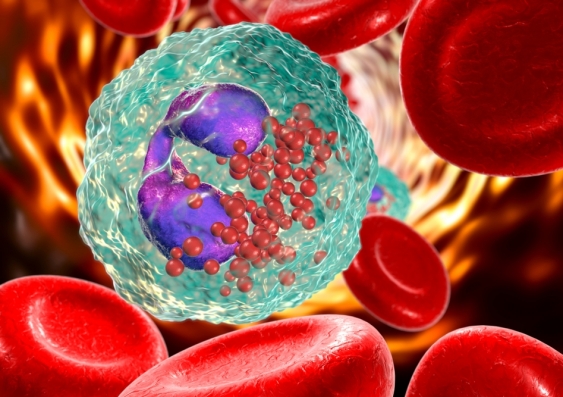 Immune cells called eosinophils could be an essential part of the process that activates ‘beige fat’, a study in mice published this week in Nature Communications shows.

If future research confirms this hypothesis, these cells may be a target for anti-obesity therapies down the track.

There are three types of fat, or adipose tissue, in the human body.

“Brown fat, on the other hand, can burn off energy, generating heat in a process called thermogenesis. This phenomenon is particularly important in babies and hibernating animals and, more recently, has also been shown to be present in adult humans.

“Beige fat is a newly discovered type of energy-burning fat that can emerge within white adipose tissue to perform thermogenesis instead of energy storage.”

In this paper, the team studied a mutant mouse model which is resistant to obesity. They found it had increased beige fat activation.

“Naturally, we were curious as to why,” says Dr Quinlan.

“We also noted that this mutant mouse had more immune cells called eosinophils, and wondered if that was the answer.”

In one key experiment, the authors transplanted immune cells from mutant mice into normal mice. The recipient mice ended up being protected from obesity when put on a high-fat, high-sugar ‘Western’ diet.  This suggested that immune cells, which are known to reside in and signal to fat, are involved in making the mutant mice beige and obesity-resistant.

“Although many different immune cells could be important, we are working on the hypothesis that the regulation of metabolism involves eosinophils,” says Dr Quinlan.

Eosinophils are a rare immune cell type important in the immune response to parasitic infection, adversely involved in asthma, Crohn’s disease and ulcerative colitis but thought to be beneficial in fat thermogenesis.

“In the lean, beige mouse there were more eosinophils in fat tissue and these eosinophils had unique gene expression profiles,” Dr Quinlan says.

“We also found evidence that eosinophils secrete signalling molecules known to play a role in beige fat activation, providing a possible link between these enigmatic immune cells and their beneficial function in adipose tissue.”

Obesity is a worldwide health epidemic. In 2016, more than 1.9 billion adults were overweight, with over 650 million being classified as obese.

“This is a serious problem since obesity is associated with increased risk of chronic conditions, such as diabetes and heart disease,” Dr Quinlan says.

“Turning energy-storing white fat into energy-burning beige fat is an attractive therapeutic strategy for obesity but currently the mechanisms that drive this process within the body are not well understood,” Dr Quinlan says.

“While we need to do more research to further validate our hypothesis, this work suggests that eosinophils may play a larger role in beige fat activation than was previously thought.”

Dr Quinlan and her research team are now focused on uncovering new factors that eosinophils secrete to stimulate beige fat activation. Such factors could form the basis of future therapeutics to activate beige fat and work towards reversing obesity.

The full study is available online. Dr Alexander Knights, a former PhD student at UNSW Sydney, drove this project and performed the key experiments with important contributions from a number of other UNSW Sydney PhD students and staff, including Emily Vohralik. The research also drew in researchers from across UNSW and Australia, including Kyle Hoehn’s and Merlin Crossley’s teams in the School of Biotechnology and Biomolecular Sciences and researchers from Melbourne’s Murdoch Children’s Research Institute and Sydney’s Charles Perkins Centre.