The School of Chemistry has lost a much-loved and admired former member of staff,  A/Prof. Harold Goodwin. 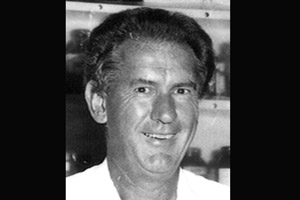 Anyone who worked in the Heffron Building between 1962 and 2000 would have known Harry, a man with time for everyone, a warm personality and a great, sometimes quirky, sense of humour.

Harry was born in Wollongong in 1935 and obtained his BSc (Hons) from Sydney University in 1956.  He began his PhD studies in co-ordination chemistry under Dr Frank Dwyer at Sydney University, but when Dwyer was offered a professorship at Northwestern University in 1958, Harry completed his studies under Dr Frank Lions and was awarded his PhD in 1960 for a thesis entitled ‘Stereochemistry and Substitution Reactions of Metal Complexes’.

He was appointed Lecturer at UNSW in 1960, still located at Ultimo at that time. In 1965 he was promoted to Senior Lecturer, to Associate Professor in 1974 and retired in 1995.  He became a world authority on the spin crossover properties, of, particularly, Iron (II) complexes and thereto introduced Mössbauer spectroscopy to the School.

His work was recognised possibly more in Europe than in his home country and he became, with Philipp Gütlich, the co-editor of the multi-volume issue from Topics in Current Chemistry ‘Spin Crossover in Transition Metal Compounds’. Harry was a good friend of Prof Gütlich and spent numerous sabbatical leaves in his laboratory at the University of Mainz, Germany. From one of those early trips he brought back to Australia a canary yellow BMW 2002 (the ‘pocket rocket’) which became famous on the UNSW campus.

When Prof Frank Dwyer died prematurely in 1962, friends, colleagues and students established the Dwyer Lectures in his honour at UNSW.  As a former student and great admirer of Dwyer, Harry organised these for many years until they were taken over by the UNSW Chemical Society.

Harry is remembered as a humble man, of great integrity who was a very good supervisor of students. He was also a calming influence at sometimes edgy departmental meetings, for which his colleagues were most appreciative.  He never appeared dour or glum and had a very good sense of humour.

Above all his son Andrew remembered a man for whom family was most important.  He loved family things such as tennis, cards, jokes, yarns and had a wonderful sense of the absurd.  He also had a life-long love of and knowledge of classical music and a passion for walking, particularly in the mountains of Switzerland, Austria and Nepal.

Harry suffered the devastating loss of his son Michael to cancer at the age of 16 but had been very proud of the achievements of his other son Andrew who is currently Professor of Materials Chemistry at the University of Oxford.

All who knew Harry will miss him enormously.  Vale Harry.