The budget's tax cuts have their critics, but this year they make fiscal sense

The government has brought forward planned tax cuts. And while some say we shouldn't be cutting taxes during a recession, the plan has its merits. 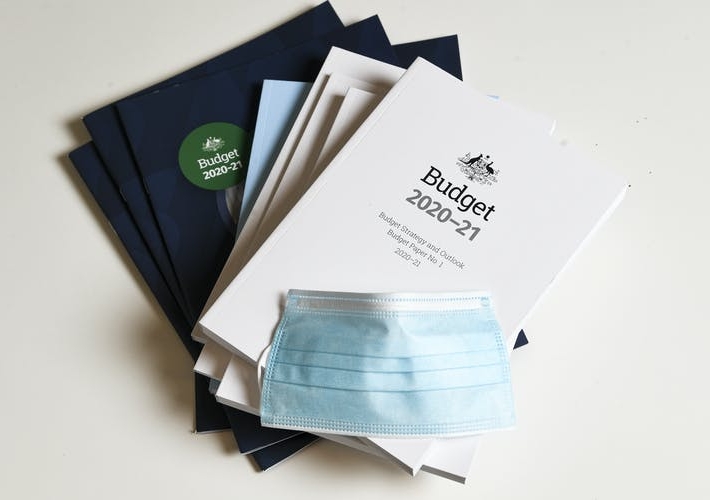 This year’s budget is something of a play in two acts. Act one involves large economic stimulus to help plug the hole in output generated by the coronavirus pandemic. Act two tries to set Australia up for a bounce back in economic growth and employment that involves more than just waiting for the pandemic to end.

Tax receipts are down, but of course spending has rocketed up to $677.4 billion for 2020-21, compared to a projection of $514.5 billion for that period at the last budget.

The massive JobKeeper wage-subsidy program, the coronavirus supplements to various welfare payments, and a number of smaller schemes to encourage building, hiring of apprentices, and boosting manufacturing all add up to an unprecedented boost in government spending.

There is room for debate about the structure of these programs and even whether they are large enough, but they are basically sound as fiscal mitigation.

Tax cuts and their critics

Much was made in the leadup to the budget about the possibility of bringing forward the already-legislated “phase 2” and “phase 3” personal income tax cuts, due to begin on July 1 2022 and July 1 2024, respectively.

Critics of such cuts make two main arguments. The first is that the tax cuts are “unfair” because people on higher incomes get more of them. The second is that the cuts are bad economics, because higher-income households just save the tax cuts, and what we need right now is lots of spending.

There is, indeed, a compelling case for putting more money in the hands of those who will spend it. Household consumption accounts for nearly 60 per cent of GDP, and during recessions such consumption takes a pounding. 2020 in Australia is no exception.

That said, there is a widespread assumption – more like an article of faith, really – that those at the lower end of the income distribution will spend any temporary income they receive. And this article of faith has a corollary: only those at the bottom of the income distribution will spend such temporary income.

This leads folks to conclude there is downward sloping relationship between income and spending of government stimulus – the lower one’s income the more one spends.

But, as an empirical matter, this just isn’t true.

As economists Greg Kaplan, Giovanni Violante and Justin Weidner have pointed out, Australia has an unusual composition of “hand-to-mouth” consumers – that is consumers who spend all of their available resources every pay period because they have relatively little liquid wealth compared to their monthly expenses.

First, we have many fewer such people than countries like the United States, United Kingdom, or Canada – a little under 20 per cent of the population. Second, and more strikingly, most of the Australian hand-to-mouth consumers – 90 per cent of them – are wealthy. That is, they have a relatively large amount of total wealth – things like real estate assets and superannuation accounts.

Only 2.7 per cent of Australian consumers are “poor, hand-to-mouth consumers”.

Notice this shatters the idea of a downward sloping income-gradient to spending. People across the income distribution spend stimulus payment.

Now, you might not feel too bad for a household with a good amount of equity in an expensive home and solid superannuation balances, but with large expenses like a big mortgage payment and private school fees. Fair enough. But that doesn’t mean they won’t spend additional income.

The effect of the tax cuts

As a stimulus measure that’s far from crazy.

The exact magnitude of this – what economist call labour-supply elasticities –varies by type of worker and on the exact nature of the tax schedule. But as Michael Keane and Richard Rogerson have noted, these effects are large in the aggregate.

Boosting the economy now and in the future

The economic problem we have been facing since March has been filling a massive drop in economic output. That will remain the central problem unless and until we have a widely-deployed vaccine.

But we cannot wait to tackle the supply side of the economy until after the immediate problems have been addressed. This budget takes a small step in that direction by bringing forward the phase 2 tax cuts. By not bringing the phase 3 cuts forward the government avoids a political fight, but risks waiting too long to begin the task of serious tax reform which is long overdue.