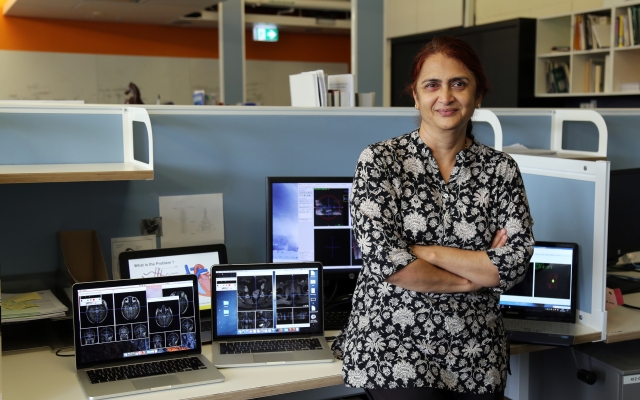 Welcome to Professor Sowmya Arcot who has been appointed as our Faculty’s Director of Governance.

Sowmya holds a PhD degree in Computer Science from Indian Institute of Technology, Bombay, with other degrees in Mathematics and Computer Science. Sowmya teaches and conducts research in learning in vision with applications in medical imaging and remote sensing, she has attracted significant funds in national competitive grants and as partner in research networks and centres. Sowmya’s interests include computer learning in vision: learning object models, feature extraction and recognition, biomedical health informatics, medical image analysis.

Professor Arcot was an elected member of the UNSW Academic Board 2008-18 and a member of its Policy Advisory Committee during 2008-2009. In 2010, Sowmya was appointed to the Academic Board’s Undergraduate Studies Committee, where she contributed to the planning and approval of university-wide undergraduate programs and participated actively in undergraduate program simplification. She has represented on the Academic Board’s Postgraduate Coursework Committee and the University Higher Degree Research Committee. In other appointments, Sowmya has been the Faculty of Engineering’s Director of Research Training (2011-2015), a member of the UNSW Postgraduate Re-enrolment Appeal Committee, a member of UNSW’s inaugural Science in Australia Gender Equity Committee, a member of the NSW Cultural Diversity Reference Group, Diversity and Inclusion Board (2016-2018) and Chair of the Computer Science and Engineering’s Teaching Committee (2008-13). During 2006-7, Sowmya was Head, Engineering, Science and Technology Division, UNSWAsia, Singapore.