Using 'base editing', researchers have cured progeria in mice. This genetic syndrome causes premature ageing in humans – those with the disease usually don't live past the age of 13. 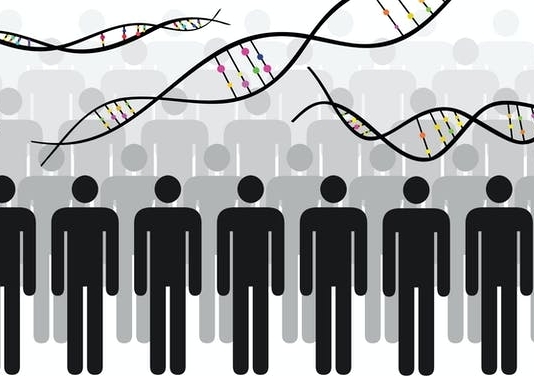 The day a muddled mob stormed the US Capitol building, a team of American researchers published a paper in Nature that signified a landmark in gene therapy.

The head of the US National Institutes of Health, Francis Collins had joined forces with Harvard University professor David Liu and others to tackle progeria, a genetic disorder that causes children to age rapidly.

The achievement, successfully tested in mice, was made possible by Liu’s invention of a second-generation CRISPR gene-editing technology called “base editing”. With this, researchers may eventually be able to correct lifelong genetic diseases, including progeria, in humans.

A rare but devastating disease

Francis Collins, former leader of the Human Genome Project, had worked on progeria for many years before the breakthrough.

Children carrying the mutation for progeria have normal intelligence but show early signs of general ageing, including hair loss and hearing loss. By their teenage years they appear very old. Few live past the age of 13.

In 2003, Collins’s lab discovered progeria is caused by a mutation (which you can think of as a “misspelling”) in a gene that encodes a protein called Lamin A. Lamin A has a structural role in the cell’s nucleus.

Many of us carry mutations in various genes. But as we typically have two copies of genes (one from our mother and one from our father), we tend to have at least one good copy and that’s usually enough.

But the progeria mutation in Lamin A is different. While there may be a good copy present, the mutant copy generates a poisonous product that messes things up, like a spanner in the works. This type of mutation is called a “dominant negative mutation”.

The solution, ideally, would be to specifically correct the mutant copy using CRISPR. With this gene-editing tool, scientists can direct a pair of molecular “scissors” to any part of the genome (DNA). Unfortunately, first-generation CRISPR technologies — while good at cutting genes — do not have the level of surgical precision or efficiency needed to correct the Lamin A mutation.

Read more: Explainer: what is a gene?

CRISPR scissors are good at finding their target and cutting, but the reconstructive surgery that comes after is left to the cell — and isn’t guaranteed to happen in every cell.

In the lab, researchers can usually manage by just correcting a few cells before growing them in a petri dish for further research.

But in humans we need to accurately correct most, if not all, cells. It would be pointless to correct the progeria mutation in five cells in a patient’s finger, while leaving the rest of the body unrepaired.

This is where David Liu’s work on “base editors” is critical. Liu identified the limitations of CRISPR technology very early and began developing molecular machines that could do more than operate only as targeted molecular scissors.

He started with naturally occurring enzymes, which can change one type of chemical base of the genetic code into another; for example, enzymes that can convert an A (adenine) to a G (guanine), or a C (cytosine) to a T (thymine). 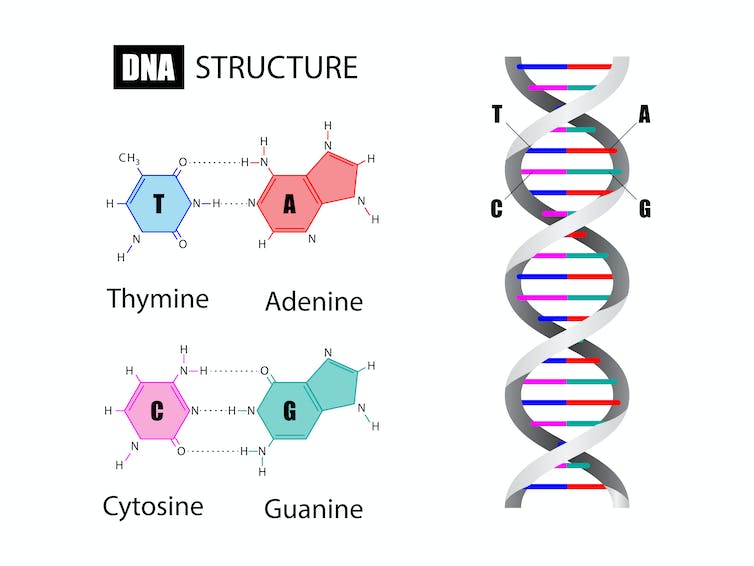 The double helix shape of DNA is supported by an alternating sugar-phsophate backbone (the sides). Attached to each sugar on the backbone is one of four chemical bases: adenine (A), thymine (T), guanine (G) and cytosine (C). The order of these bases is what determines an organism’s genetic code. Shutterstock

Liu then modified the enzymes to make them more precise and fused them to CRISPR to create fusion proteins called “base editors”. Since CRISPR technology is good at reading DNA and finding a target, it can effectively deliver the editors to the gene that needs to be changed.

It’s important to highlight Liu deliberately developed base editors so that they change letters, but no longer sever DNA like CRISPR scissors. This is crucial, as cutting DNA increases the risk of larger chromosomal deletions, which can potentially damage cells.

Read more: The Resilience Project: finding those rare people with genetic disease mutations who are healthy

The differences of mice and men

Collins, Liu and their colleagues knew they would have to get base editors into all (or at least most) of the cells of a mouse with progeria to cure it. For this, they relied on using hollowed-out viruses as delivery vectors.

They used a vector based on the Adeno Associated Virus, or AAV. As students, we joked AAV stood for “almost a virus”, as it’s one of the smallest viruses and doesn’t cause any known disease.

Collins and Liu packaged the AAV virus particles with genes encoding the relevant base-editing enzyme and delivered them into the mice. The treated mice essentially avoided the disease and became indistinguishable from healthy mice.

In this video, Collins and Lui discuss their work involving treating progeria in mice.

But, of course, this all happened in mice — and humans are bigger. We don’t know how difficult it will be to upscale this gene-editing machinery to work reliably in humans. But in any case, Collins and Liu have taken an inspiring first step by showing it’s possible in mice.

Base-editing CRISPR tools are a dream come true for experts committed to gene therapy and for families afflicted by conditions such as progeria. Work on this front is just beginning. But in these dark pandemic times, it provides much-needed new hope.