Politicians need expert help to change culture of sexual violence, not yet another review

Universities are a step ahead in having adopted a number of practical changes, but it's clear transformative cultural change in our institutions requires all the expertise they can muster. 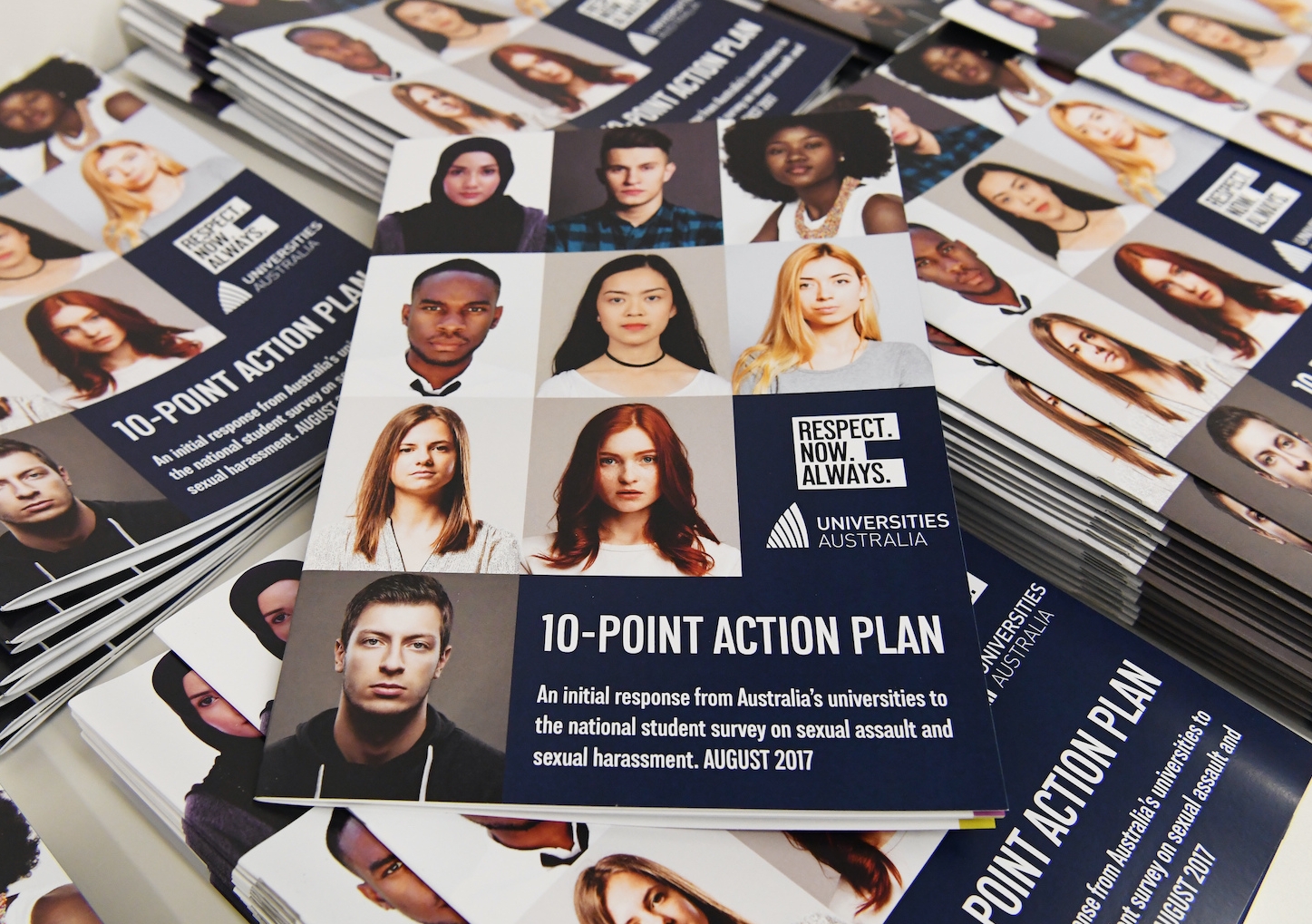 Allegations of sexual assault and harassment in the nation’s corridors of power once again reveal two consistent features of this conduct: a culture that enables such behaviour, and a high degree of impunity that invites its recurrence. University campus culture was similarly in the spotlight following the release of damning reports in 2017. The lesson to be drawn here is that while these reports led to several practical changes (necessary as they are), what is now called for is transformative change.

Last August, a former Australian National University student successfully sued a university residential college. She did this after five years of seeking acknowledgement of some responsibility and redress for an alleged sexual assault by a male student following a John XXIII College “hazing ritual”. To date, no criminal charges have been brought.

In civil proceedings, the ACT Supreme Court found the college had condoned a “hard-drinking” culture “as a badge of honour”. It had also failed in its duty of care to the complainant by mishandling her allegations. The court found several dismissive comments by the head of the college were “entirely inappropriate” and “a massive departure from the pastoral duty of care [he] had”.

Read more: Brutal rituals of hazing won't go away — and unis are increasingly likely to be held responsible

A 2019 workplace investigation commissioned by the University of Melbourne found a senior academic had sexually harassed a young woman colleague in breach of the university’s workplace behaviour policy. The internationally renowned academic, who denied the allegations, has retained his role, although the vice-chancellor this month declared sexual harassment “has no place at our university or in society”. The university would not reveal what action, if any, it has taken against him.

What came out of the university reviews?

A three-year research project, begun in 2015, investigated how to strengthen Australian university responses to sexual assault and harassment. It included the first national student survey about these problems. 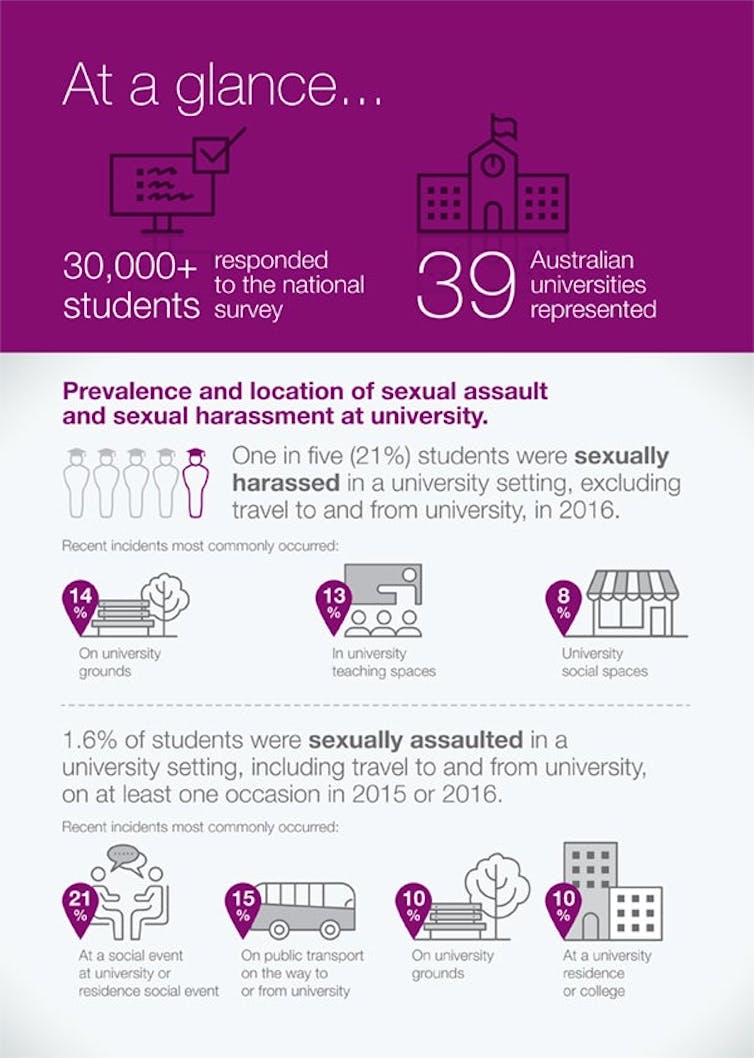 Since then, several reviews of university responses by the Australian Human Rights Commission and another by TEQSA suggest Australian universities have, in the main, acted on these recommendations. They have: 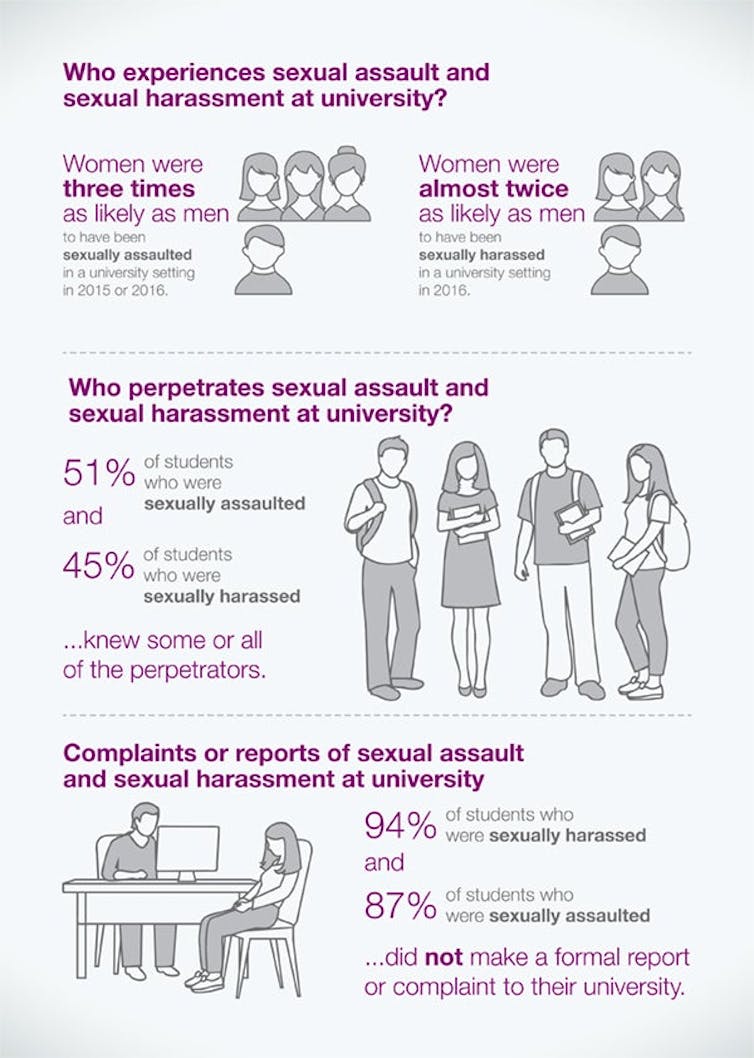 Most of these responses, while laudatory, are essentially reactive. The same can be said of government responses to the recent claims of sexual assault and harassment in parliament. It has set up inquiries and reviews into workplace conduct, which will investigate:

Hierarchies of power are part of the problem

We have seen comparable investigations of other Australian institutions. The Australian Defence Force undertook such a review from 2011 to 2014. More recently an inquiry by the High Court of Australia exposed analogous accounts of sexual assault and harassment.

In all these environments, hierarchies of power make reporting of such conduct precarious for complainants and the prospect of accountability remote.

The surveys, reports, reviews and investigations referred to above have all clearly identified the pervasive reach and harm of sexual assault and harassment. They have usefully recommended practices and procedures.

What is absent from many institutional responses, though, is the less concrete issue of understanding. How do they tackle a culture of inequality that enables and condones sexual assault and harassment, mainly against women?

Many institutions and corporations confronted with this conduct are caught between ensuring the safety and well-being of a victim of harm and protecting the institution’s reputation. Last week, a $US852 million ($1.1 billion) settlement involving the University of Southern California highlighted this conflict of interest. When institutions seek to mediate this tension, the seemingly less immediate but larger project of transformation can be limited and overlooked.

In a speech to parliament following the nationwide March 4 Justice rallies, Victorian Liberal MP Russell Broadbent acknowledged “the anger, the hurt” and “the disregard for women that has led to this fork in the road”. He spoke of the need to “effect change” and “so enrich the nation”.

Read more: The women's march was a huge success. Now comes the hard part: how to actually get something done

The national imperative for change requires governments to move urgently to engage experts in the field – from academia and civil society. For decades, these experts have sought to identify and fathom the entrenched inequities that give rise to sexual violence in all its dire forms.

Universities can and must make a contribution that goes beyond compliance with minimal standards of “best practice”. They offer two critical communities, students and academics, who have the perspectives and expertise fundamental to resolving a social problem of national concern.

Students have diverse personal and social experiences both outside and within the academy. They also offer the long-term potential to influence drivers of change.

Traditional policymaking cannot achieve the enormous task now before government. This approach will fail if the values, structures and systems underlying dysfunctional behaviours remain in place. And the costs of inertia on these issues have far-reaching consequences for the political, social and economic health of the country.

Surveys, reports, reviews and investigations that lead to good practice, procedures and remedial measure are essential to address immediate needs. However, government on its own is unsuited to achieve lasting, transformative change. The wealth of academic and civil society expertise and evidence-driven solutions are needed to support this exacting process.

Read more: Bad times call for bold measures: 3 ways to fix the appalling treatment of women in our national parliament