What does it take to be a female leader in science?

Two scientists reflect on what they learnt on historic Antarctic voyages designed to transform them into leaders. 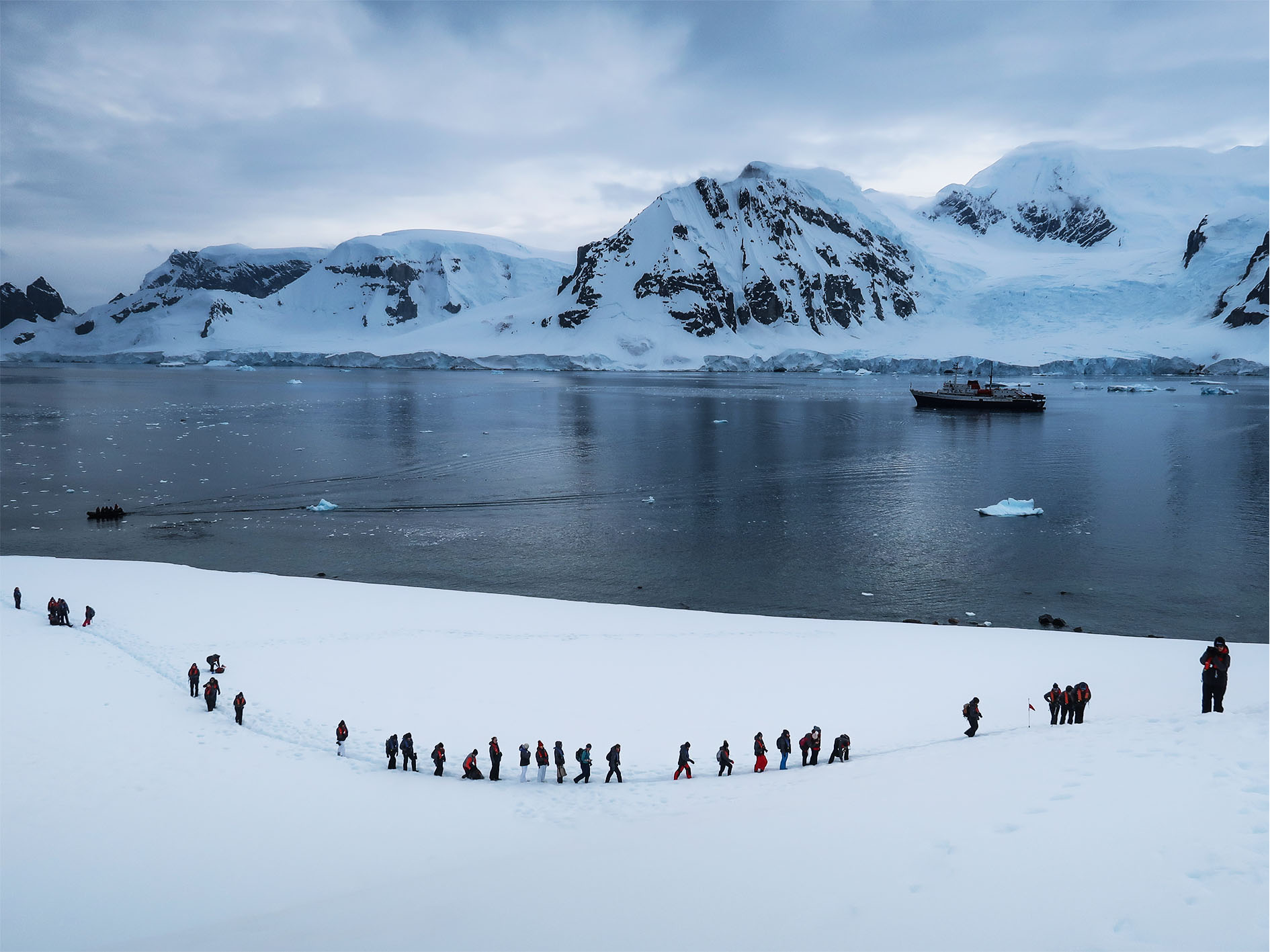 For a marine biologist who normally heads to warmer climates for both research and holidays, heading to Antarctica for a women in science leadership program was an “insane” experience for Dr Steph Gardner.

“One of the most notable experiences was experiencing complete silence,” the UNSW scientist said.

“We walked to the top of Danco Island, which was deep in snow. There was 360 degree views of the Antarctic landscape and we were in complete silence and it was absolutely breathtaking.

“You could hear your heartbeat, you could feel it. You’d occasionally hear a humpback whale breathing.

“Towards the end of our time up there we hear a glacier breaking…and then you could see this avalanche falling down the side of the land…it was a bit addictive.”

It’s a 10-year project that aims to annually lead an international group of female scientists on an Antarctic journey to transform them into leaders that will make meaningful change.

Prof. Brough was on the inaugural Homeward Bound journey in 2017, where the first 76 of 1000 scientists travelled on a ship for 20 days to Antarctica. That journey has been documented in The Leadership, which was released last year.

“One of the things we were joking about all of the time was ‘what can we learn (in terms of leadership) from the penguins?’,” Dr Gardner said.

“(The penguins) would fall down and they’d get back up and keep going and we all thought that was pretty symbolic. Others were really cautious before entering the water…some would just go straight in…there is also strength in their numbers. So if there’s a blizzard, they all huddle together and use each other for body warmth…And you know there’s parallels there with how we all approach our leadership.”

Prof. Brough, an astrophysicist, said she was immediately drawn to Homeward Bound.

“At the time I was chair of the Astronomical Society of Australia’s – Inclusion, Diversity and Equity in Astronomy chapter, so I was very passionate about this subject. I was rising up in my career and wanting more leadership skills. And I’ve had an overriding obsession with penguins for a very long time.”

The majority of the women scientists on the inaugural journey were the only female in their department or in their school.

Similarly, Prof. Brough is one of only 16 female Professors of Astrophysics in Australia.

She said it was life changing experience to meet and hear stories from female scientists in different career stages from around the world.

“I was the mother of a four-year-old at the time. To put down those day to day demands of parenthood and work and just sit there and focus on ‘why do you want to be a leader’…that was really powerful. It came at a really crucial time in my career as I came back and accepted a job to start at UNSW.

Prof. Brough said she also learnt to stop thinking that she had to be given permission to do things and recognised that she was already leading lots of things ‘perfectly adequately’.

“I just had to get on and do it…The leadership roles aren’t always easy but it’s not because of lack of training or expertise on my part, it’s because anybody in that role would have those problems,” she said.

“So I guess I needed to stop being so critical of myself.”

The Homeward Bound program came at the right time for Dr  Gardner.

“I was just starting my career and all of the skills and training that I can use throughout the rest of my career I heard in the program - it was just what I needed to hear,” the marine biologist said.

Dr Gardner said a topic central to the program was imposter syndrome.

“They asked us to stand up if you’ve ever felt like you’re not good enough or you feel like people think you’re a fraud,” she said. “Everyone single woman in the room stood up and this was 78 people. I was just blown away. I was like, ‘What are you doing standing? You’re an astrophysicist and you’re a Professor of Ecology’. [Imposter syndrome] never seems to go away, even though you've had so many achievements and successes."

The need for an ‘internal makeover’ to build confidence was an important lesson, Dr Gardner said.

“How we treat ourselves and the stories we tell ourselves is important, because that ultimately influences our ability to step into leadership positions,” she said.

For Dr Gardner, that internal makeover meant having to examine why she didn’t like public speaking at conferences.

“The story I tell myself is that people are going to think that I don’t know what I’m talking about,” she said. “But something (Homeward Bound) got us to think about was ‘you are all scientists, you like evidence, what evidence do you have to say that you’re not good at doing that kind of research?’ And that really made me think.”

She said negative stories wasted time and energy that could be channelled into something else ‘that’s much more useful’. “That was a big lesson for me.”

Be comfortable with change

Other learnings were that it is ok to ask for help; and to become a leader, you need to become comfortable with uncertainty and change – just like the weather in Antarctica.

“The weather in Antarctica would completely change your plans on a regular basis,” she said. “You’d plan to do a landing but then the ice shifted too much so that it was too unsafe for the landing. So you really had to be comfortable with uncertainty and change.”

Dr Gardner said prior to Homeward Bound, she was ‘kind of structured and rigid in my approach to things and I’d stick to my plan’. “I’ve since reflected on this, particularly over the past year with COVID-19. I’ve learnt that we really have to be flexible, so that was a good lesson for me.”

Many gender gaps in STEMM (science, technology, engineering, maths, medicine) are predicted to take generations to fix – including the statistic that  almost half (43%) of all women scientists leave full time STEMM careers after having children.

Prof. Brough said she points out female scientists that have had children, both at the start and in the middle of their careers, to her younger colleagues. “It is possible”.

The astrophysicist said the biggest piece of advice she gives junior women is ‘you have to live your life’.

“You can’t not have a child and not buy a house or make other big life decisions because you don’t feel it’s going to fit with your career. Because at the end of your life, that will be a bigger regret.”

“I saw one of my PhD cohort accepting a job via phone and heard her say ‘well no, I don’t think that’s an adequate salary, I’d like to be paid more’,” Prof. Brough said. “And so that completely normalised the idea of asking for a raise.”

Scientists who are mums

Sharing an office with a colleague who was also a mother was also helpful.

“She had a child early and a successful career and that normalised seeing that on a daily basis,” Prof. Brough said. “She’s still absolutely one of my heroes in science.”

As a consequence, Prof. Brough says she tries to be visible to her team about what she does as a parent in science.

Dr Gardner said she was lucky to have inspiring mentors, starting with a high school biology teacher through to role models as a University student.

“I feel like I want to pay it forward because of them,” she said.

But now a lot of women at her career stage are faced with choosing between an academic career and a family.

“It’s a decision that a lot of men don’t really have to make and it shouldn’t really be a ‘this or that’ choice,” she said.

“I’m starting to realise that we are losing a lot of women in these leadership positions and a lot of that can be attributed to this structural inequality and we need institutional or systemic change to address this.”

Male scientists cite their own research 70% more than female scientists, according to The Leadership. A high citation index leads to promotion.

“If women don’t have the support or flexibility to keep pursuing our careers, it makes it a lot harder,” Dr Gardner said.

“There are institutional changes that could be made, such as having your meetings between 10am and 2pm, just to make things more inclusive.

“Finding jobs is heavily based on citations and the amount of times you’ve published your work, but if women have had time out of their careers to raise a family it makes it hard to keep up with those citations.”

But Prof. Brough says this sort of systemic change has happened and is continuing to happen, particularly at UNSW.

“When you go for a promotion, we make sure that parental, carer or sick leave is taken into consideration when assessing your contribution over that period of time.

“I’ve worked on UNSW promotion committees and I tell you absolutely that those are taken into account and I’ve seen these things benefit both genders.”

So what is the way forward for women in science leadership?

“These are qualities that we do need in leadership, throughout the world,” she said.

“It is super important to be able to improve the visibility of women in STEMM and gender equity because we are losing a lot of women from the Australian science sector.

“If we are not including the considerations and experiences and adding value from everyone, which would be a 100 percent representation, we’re really missing a large proportion.”

Prof. Brough said science is a “super awesome, fun, exciting, interesting career that brings a lot of flexibility” but it has similar downsides to other careers.

“I’d like future young women in science to know that their male and female colleagues in science are working really hard to make the environment and culture even more positive and supportive,” she said.

“I think it’s incumbent on us more senior people to say the things that need to be said to improve culture, to be vocal and not worry about doing that.”