What we can learn from the world's biggest waves

On the tenth anniversary of the Japan earthquake and tsunami, a UNSW scientist says reminders of past events can help teach people about the power of the world’s biggest waves. 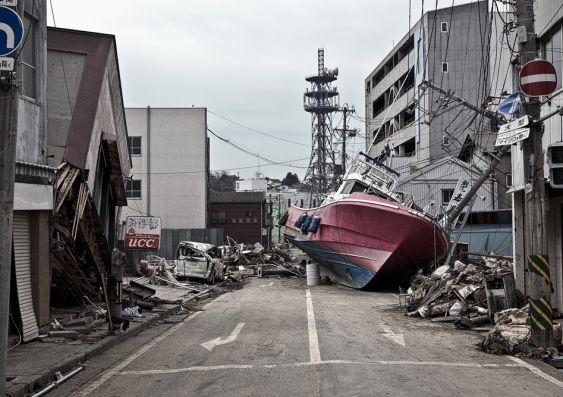 Alaska is renowned for its postcard pretty mountains, vast spaces and massive earthquakes.

But not many people know the highest tsunami wave ever accurately measured – at 524-metres – occurred in Alaska.

It happened 63 years ago during a tsunami – an unusual wave that is usually generated by either a large undersea earthquake; volcanic eruptions; landslides that fall into the sea or that occur underwater; and asteroids.

Evidence of the destruction caused by the Lituya Bay, Alaska tsunami can still be seen from space.

According to Honorary Professor of Tsunami Research at UNSW’s Earth and Sustainability Research Centre, Professor James Goff, it’s reminders of these events that help to teach people about the power of tsunamis.

“It is all too easy to forget about tsunamis, after all most of us have never experienced one,” he says.

“They always happen to other people, not us. And yet almost every coastline in the world has at some point experienced one, and for those of us who live inland – well, we like to travel, we spend time by the sea, and so in reality these killers are something we all need to be aware of.”

Prof Goff, who has been studying tsunamis for 30 years, has co-authored Tsunami: The World’s Greatest Waves with another tsunami specialist, Emeritus Prof of Marine Geology and Oceanography at the University of Hawaii, Dr Walter Dudley.

The book details many accounts of survival stories.

“They all say, ‘if you think there’s a tsunami coming, just get the hell out’,” Prof Goff says.

The book describes how Lituya Bay fjord on Alaska’s southeast coast has been hit by tsunamis throughout history and captured world attention in 1958.

On the evening of July 9th there were three fishing boats anchored in Lituya Bay.

Bill and Vivian Swanson on the Badger would later recall seeing the Lituya Glacier appear to ‘rise’ as the surrounding mountainside slid away and crashed into the more than 200 metre deep bay.

“(The glacier) was jumping and shaking,” Mr Swanson said.

“Big cakes of ice were falling off the face of it and down into the water.”

Then, “the glacier dropped back out of sight and there was a big wall of water”.

The tsunami carried their boat 25 metres above sea level, over trees and boulders, and dumped it on the other side of the Bay. They both survived the crash landing.

Another crew on a boat also survived, but a husband and wife in a third boat were killed in the tsunami.

The second-largest earthquake ever recorded also occurred in Alaska. 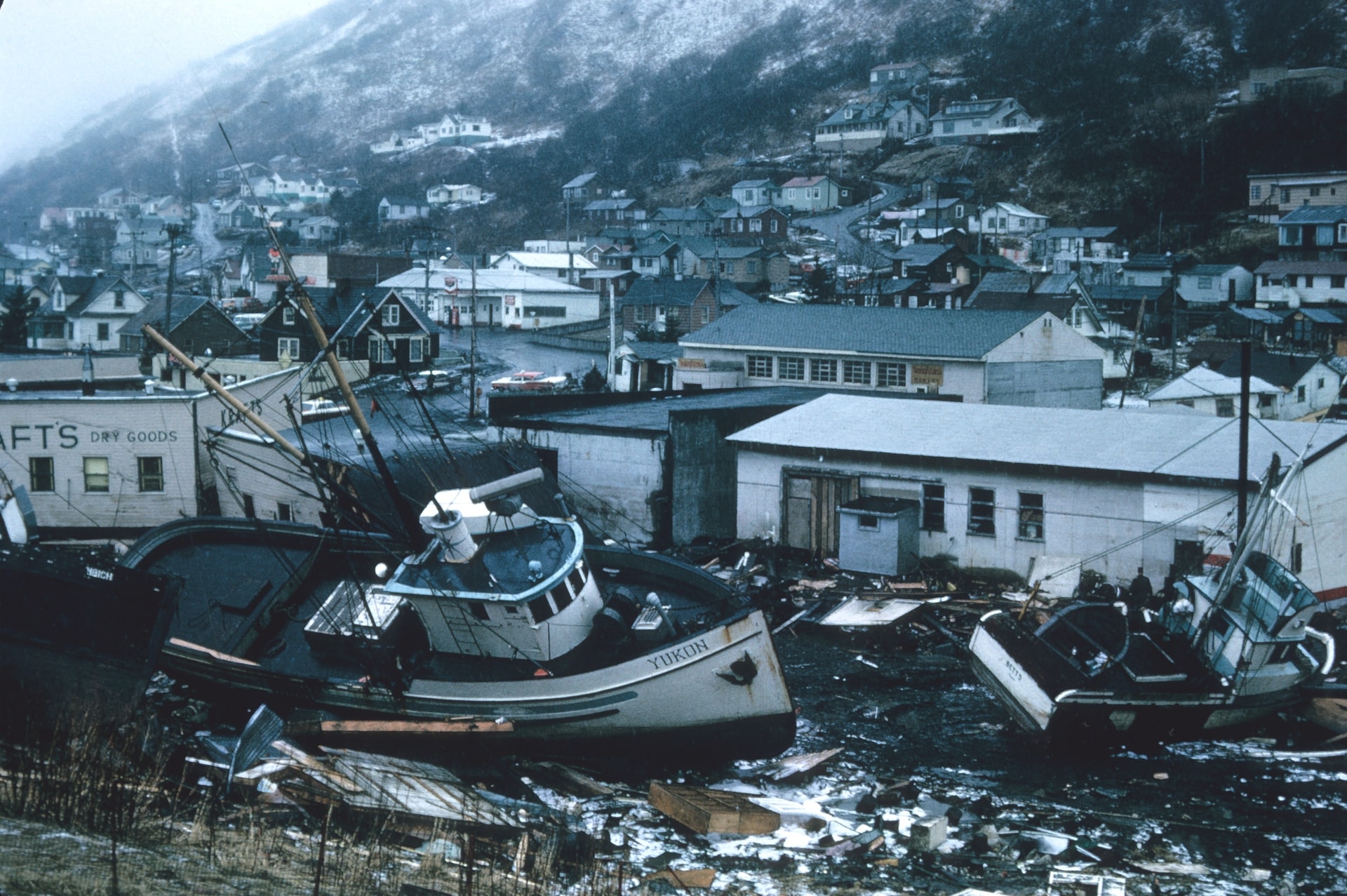 Damage from the Alaska 1964 Good Friday earthquake and tsunami. Image: NOAA on Unsplash

The devastating 1964 Great Alaskan Earthquake (9.2 on the Richter scale) and Tsunami occurred in the Prince William Sound region of Alaska.

“One family heard the tsunami coming and climbed onto a rooftop which the tsunami would rip off the house and they would then ride up slope into the forest and survive,” Prof Goff says.

“Other survivors recall watching the waves roll into the city of Seward, crushing huge oil tanks. The water, covered with oil, caught fire and turned into a flaming tsunami.”

Then there is the curious story of the six intact whale skeletons that were thousands of years old found at the top of a 150 feet high cliff near Wellington, New Zealand.

“How did they get there? Humans weren’t around in New Zealand at the time. There is only one answer ... an underwater landslide that occurred in (nearby) Cook Strait that threw them up on the top of the cliff.”

The clifftop site has now been developed for houses.

Prof Goff is concerned that people have forgotten about just how devastating tsunamis can be, such as the deadly 2004 Indian Ocean tsunami which killed almost 230,000 people, and he wants people to be educated about the risk.

The 2004 tsunami was triggered by a 10 minute long 9.1 magnitude earthquake off the coast of Indonesia.

The resulting 800km/h waves ravaged the shores of Indonesia and Thailand, reaching Sri Lanka, The Maldives and South Africa, and were recorded in all the major oceans of the world.

Australia is not prone to the big earthquakes that trigger devastating tsunamis.

“This means that countries like Chile, Japan, Mexico, and New Zealand and US states such as Alaska, Washington, Oregon and so on can produce large tsunamis, and our near neighbour Indonesia is also part of that group where the Pacific and Australian Plates collide.”

He says Australia, while being distant from the plate boundary, still receives tsunamis from these earthquakes.

There are also many ways to generate tsunamis and Australian scientists continue to explore those created by submarine (underwater) landslides offshore.

Prof Goff says the chances of a tsunami being generated increase every year in areas which are normally seismically active but haven’t had recent earthquakes.

“Small earthquakes are “a good thing” as they help to relieve the pressure along seismically active areas,” he says. “But long periods of time without quakes in these areas means that the pressure is continuing to build and may well be relieved by a really big quake.”

He says there are a number of these so called ‘seismic gaps’ around the world.

“For example, the Cascadia Subduction Zone is a seismic gap. It lies offshore of Oregon and Washington states in the US and southern British Columbia and is similar to the fault zone off the coast of Sumatra that caused the 2004 Indian Ocean tsunami,” he says.

“When earthquakes occur there they are big events and generate Pacific-wide tsunamis.”

The Pacific Tsunami Warning System was developed with all of these places and the tsunamis they can generate in mind.

It was set up in the mid-sixties after Hawaii was hit by two big tsunamis – one from the Aleutian Islands off Alaska in 1946, and another from Chile in 1960.

In parallel to this, the Indian Ocean Tsunami Warning System was set up after the 2004 Boxing Day tsunami.

For these systems to work, deep ocean sensors in the middle of oceans record tsunamis after an earthquake has occurred and mathematical models based upon the data received can be used to predict how big the tsunami will be in different places, and when it will arrive.

But people in areas that are at tsunami risk should not rely solely on the warning system, Prof. Goff says.

He says that sadly many affected coastlines do not have tsunami warning signs and fewer have marked evacuation routes, and tsunami education is lacking.

“You’ve got a very short time period for that warning,” he says.

“Let’s say the earthquake happens 10 minutes from where you live, the warning might arrive after that, which is too late for you.”

The best preparation, he says, is for people to be able to recognise the signs of a tsunami such as the shaking caused by a large earthquake or the rapid retreat of the sea from the coast as the tsunami draws in water as it approaches – and have a plan.

“Where is your evacuation route? How are you going to travel along that route? Where is your family going to meet up? Where is the nearest high ground or four-storey concrete reinforced building and how long does it take to walk there?”