UNSW Science’s Associate Professor Adriana Vergés explains why she is one of the driving forces behind the Manly Seaweed Forests Festival. 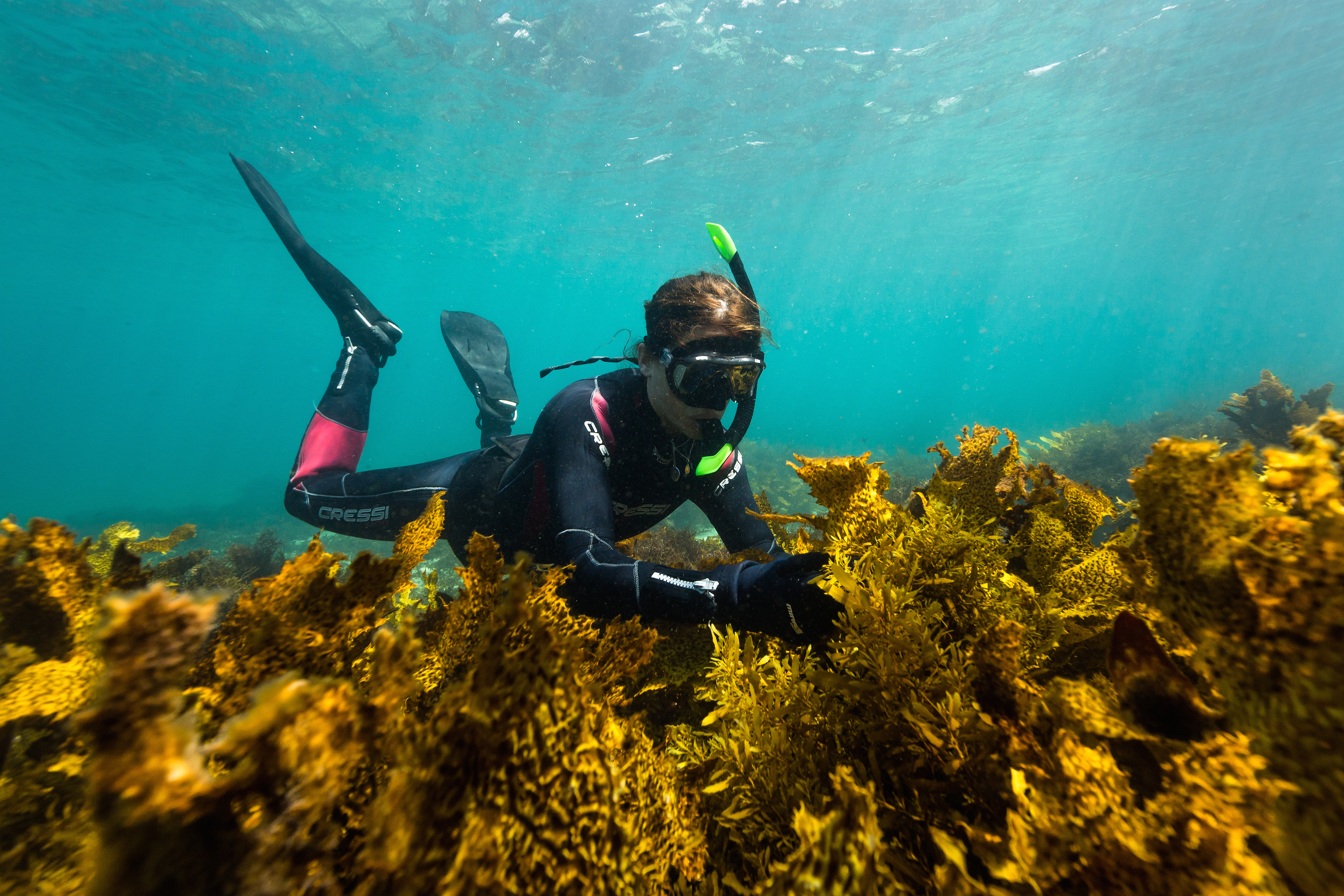 The impetus for the work came from the disappearance of seaweed from much of Sydney’s coastline due to pollution caused by sewerage outfalls on beaches from the seventies through to the 1990s.

The eventual construction of deep ocean outfalls to empty Sydney’s sewerage system gave scientists a chance to start rebuilding the important ecosystems near the shoreline.

They have been incredibly successful in their underwater gardening initiatives, restoring habitat in six locations along the Sydney coastline, including Cabbage Tree Bay, Little Bay, Coogee, Newport and Freshwater.

The UNSW marine ecologist is one of the team behind the month long Manly Seaweed Forests Festival, which starts on April 9.

“Seaweeds make up incredibly beautiful and highly productive underwater forests that underpin the ecology of the entire southern coastline of Australia, and yet people know remarkably little about them,” A/Prof Vergés said.

“Our intention with this festival is to bring together a diversity of artists, thinkers, chefs and entrepreneurs to celebrate the beauty and importance of our wonderful local underwater forests.”

Science, art and community come together in the festival which features talks, underwater tours, artwork, music and food – all celebrating the beauty and importance of local marine environments and the underwater seaweed forests that fuel these ecosystems.

The festival will feature scientists from the Sydney Institute of Marine Science [SIMS] and a host of leading thinkers, including leading climate change scientist Professor Tim Flannery and Olympian Shane Gould AM MBE.

It is being held at the Manly Art Gallery & Museum, which is showcasing Seaweed Arboretum by acclaimed artists Jennifer Turpin and Michaelie Crawford: an art installation which provides a poetic and experiential ‘habitat’ for the Festival.

A/Prof Vergés own interest in seaweed began as a child growing up in Barcelona and swimming in the Mediterranean.

“People associate seaweed with the ‘wrack’ that ends up on the beach, which is rotting, but growing up in the Mediterranean, which has no tides and where one only sees seaweeds underwater, there was nothing bad or smelly about seaweed, there was just beautiful, colourful, mini trees. Red seaweeds for example can be incredibly pretty.”

She fell in love with seaweed while studying her Honours in Marine Science in the west coast of Ireland.

“That’s when I realised how versatile they are, and how important they are as habitat,” she said.

“Seaweeds not only provide food, habitat and shelter for hundreds of marine critters, but they also produce oxygen and capture carbon at remarkably fast rates, which means they can play an important role in reducing our CO2 footprint. They also provide habitat for commercially important species, like crayweed supports rock lobster and abalone, which are the two most valuable fisheries in Australia. We depend on seaweed.”

After doing a PhD in marine ecology, Adriana became a lecturer at UNSW Sydney in 2010.

“Australia is a mecca for seaweed scientists,” she said. “The biodiversity that we have here in Australia is unparalleled, particularly in the southern half of Australia. There’s nowhere in the world that has more species of seaweed than here, so I remember being completely overwhelmed when I first dived in Australian reefs. The sheer diversity of seaweed, the forms, the colours, the size were just phenomenal, especially coming from the Mediterranean where everything is miniaturised.”

In 2011 and together with a group of scientists from UNSW and NSW Department of Primary Industries she started Operation Crayweed as a science experiment.

“Crayweed is a species that used to be everywhere in Sydney, it went missing in the seventies and eighties, and nobody even knew that it had gone missing from 70 kilometres of coastline – from Palm Beach until Cronulla - until 2009,” A/Prof Vergés said.

“When we did transplant experiments and realised that not only could crayweed now survive in Sydney but that we could also make it reproduce, that’s when we got excited because you don’t often come across many fixable environmental problems.”

This underwater gardening involves scientists drilling into underwater rock and transplanting Crayweed into the rock.

“We stress the seaweed just enough so that the first thing they do in their new site is reproduce and that is the start of the self-sustaining population. The ones that we transplant will live for maybe two years, but the ones that grow around it are the nucleus of the new population.”

There are now multiple generations of Crayweed growing in six of the 12 sites they have targeted.

Declining seaweed populations is also a major problem in Tasmania, which has lost 95 percent of the giant kelp forest due to warmer waters caused by climate change.

“That is a hard one because to conserve the giant kelp we really need to address climate change, and that will take effort from the whole planet. We need to prioritise reducing CO2 emissions, but in the meantime the rescue efforts over in Tasmania involve trying to see if it’s possible to create giant kelp populations that can adapt to warmer conditions.”

With the Manly Seaweed Festival, A/Prof Vergés is keen to change the perception that Sydneysiders know more about the Great Barrier Reef, which is thousands of kilometres away, than important seaweed forests off their local beach.

“The Great Barrier Reef might have more diversity of species overall, but those species are actually relatively common and found in other places around the tropics, whereas a very large proportion of the species of seaweeds and many of the critters that live in our seaweed forests are only found in the southern half of Australia and nowhere else on Earth,” A/Prof Vergés said.

“Traditionally there’s been more efforts spent raising awareness of tropical systems, but we also need to look after the ones right here, in what we call the “Great Southern Reef”, where over 70 percent of Australians live.”

The idea for a seaweed festival came after a six year collaboration with artists Michaelie Crawford  and UNSW A/Prof Jennifer Turpin, which has utilised art as a tool to raise awareness about seaweed, including a 2016 entry in Sculpture by the Sea.

“We want to shine a light on our restoration work happening underwater, out of sight for many, and we want people to connect with their local marine environment,” A/Prof Vergés said.

A/Prof Vergés will discuss four inspirational seaweed conservation projects at the Making the science visible and encouraging stewardship of our oceans talk on Sunday April 11 at 1.30pm.

Moderated by the ABC’s Costa Georgiadis, the session shines a light on how the projects are re-establishing lost marine environments and enhancing marine biodiversity in Sydney.

“These projects  are incredibly inspiring examples that show that science can now be effectively used to fix environmental problems of the past, and when we give nature a helping hand, the ability of species to recover and flourish again is truly remarkable,” she said.

“The gallery is delighted to play host to Manly’s Seaweed Forests Festival and to exhibit the Seaweed Arboretum, which forms the stunning backdrop to many of the festival events while contributing to the understanding and appreciation of our ocean’s seaweed,” Director of the Manly Art Gallery & Museum, A/Prof Michael Hedger said.

The Manly Seaweed Forests Festival, sponsored by SIMS and funded by the NSW Government’s My Community Grant program, is being held at the Manly Art Gallery and Museum from April 9 until May 9.