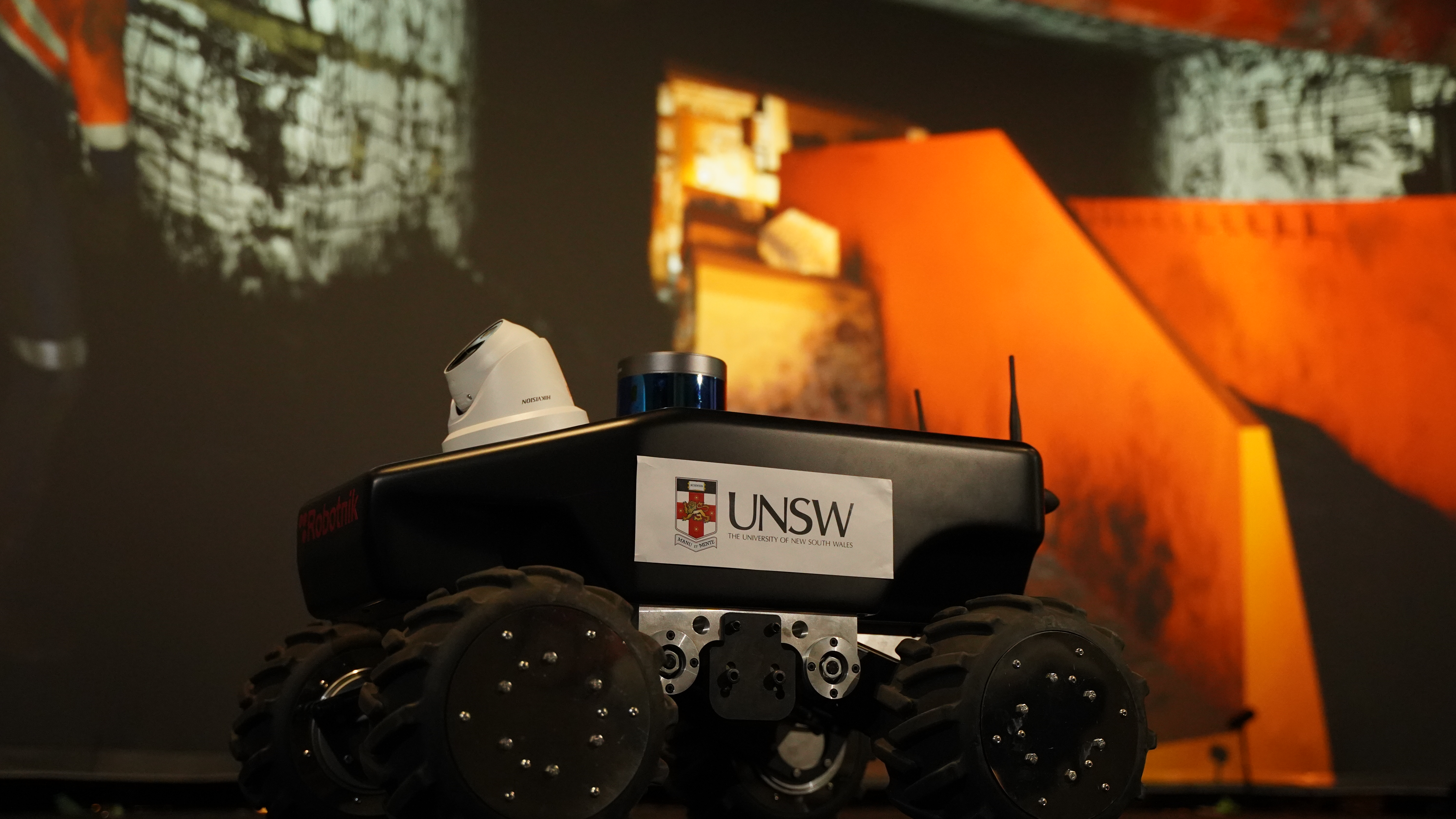 The Mine Internet of Things (MIoT) Laboratory has been established to help mines plan, improve safety and efficiency.

The MIoT Laboratory uses mobile robots such as the one pictured above equipped with a LiDAR, a ColorVu camera and other sensors.

Minerals and energy are essential for many industries such as healthcare and farming, making mining vital to society and the economy at large. However, the mining industry is coupled with many challenges ranging from high costs, difficult working conditions, and an ever-changing economic market. The mining industry has mostly relied on human resources for physical and mental labour. This is changing in the 21st century as technological advancements are starting to be used in mining operations.

Research Director Serkan Saydam explains in the book “Mines of the Future”, that the mining industry in the future needs further innovation in the application of advanced technologies towards the difficult and challenging environments in underground mines. One of these advancements is through industrial telecommunication technology in the form of Internet of Things (IoT). IoT creates an infrastructure in underground mining to improve safety and efficiency.

The beginning of the Mine IoT laboratory

The concept of IoT started in late 1990 and as the internet just started, it aimed to connect all devices to the internet.

The story of IoT at UNSW begins with small steps that became quite large. The laboratory was officially started in 2017 by Dr Binghao Li. Dr Li started with underground mine positioning and navigation in 2014 but eventually progressed with the official inclusion of IoT in 2017 with the aim of finding cost effective communication solutions for underground mining. Dr Li joined the School of Minerals and Energy Resources in 2015 and worked with Prof Saydam to start the laboratory.

The Mine Internet of Things Laboratory (MIoT) at UNSW was the first to be created in Australia and is a multidisciplinary laboratory. The projects have been done in collaboration with the Faculty of Engineering and the Faculty of Arts, Design and Architecture (Eduardo Benitez Sandoval).

What does the MIoT laboratory do?

While underground, “what” “when” and “where” are of interest. People want to know the detailed information of the underground environment, understand all the activities (what), when the activity happened and where it happened. That is where IoT comes in.

“As GPS technologies cannot be used underground due to the blockage of signals, alternative technology must be used like Wi-Fi, Bluetooth Low Energy and ultra-wide band to locate people.” Dr Li says.

‘Using IoT increases the capital costs but in the long run, it reduces the cost of operations such as human errors and increases safety of workers to which costs should not matter’ Prof Saydam says.

One of the applications of IoT can be seen with the creation of a collision avoidance system. The system can detect the appearance of vehicles and works. Thus, it helps to prevent collision accidents between workers & vehicles and vehicles to vehicles. It helps to provide warnings when a person is near a vehicle, or when two vehicles are too close to each other.

Using IoT will help bring much needed advancements in mining due to the safety, increased autonomy and efficiency. This is the first step in the creation of fully automated mines. In the future, robots will be the main actor in mining operations to reduce the number of people underground.

The IoT Lab also works in other areas apart from mining such as Indoor Position and Indoor Navigation (IPIN) for people who are blind or have low vision.

What technologies are utilized in MIoT?

The technologies used in MIoT include indoor position technologies such as Wi-Fi, Bluetooth low energy (BLE), Ultra-Wide Band (UWB) Radio frequency Identification (RFID); communication technologies such a Long Range (LoRa), BLE, NBIoT, eMTC, 4G and 5G. There are also varied sensors such as Light Detection and Ranging (LiDAR), which prepares range measurements to scan the environment to provide a three-dimensional map. Others include cameras and robotics which can be used for tasks not suitable for humans.

The MIoT Lab started with the first grant from the Department of Industry, Science, Energy and Resources (DIIS) Global Connections Fund Bridging Grant ($49.8k). This was for the project “A cost effective communication mechanism for underground mine Internet of Things” in 2017 which set the background for the laboratory.

The aim of this project was to find power underground in mine sites. The traditional way to obtain power is through batteries or above ground, solar power can be obtained from the sun, but this is not possible in underground mining. The project realised that an alternative could be found using vibrations for their energy. This can be harvested to generate electricity that can be used both underground and, on the surface.

In this project, Deep IoT has two meanings in this scenario, deep underground and deep learning. This project combined 4 major wireless technologies to provide a hybrid wireless IoT platform to collect real-time data using monitor sensors and positioning in underground mining. The data and information would then be sent back to the surface.

For more information and contacts

Binghao Li is Senior Lecturer with the School of Minerals and Energy Resources Engineering, University of New South Wales, Sydney.

Serkan Saydam is a Professor and Director of Research at the School of Minerals and Energy Resources Engineering at UNSW.