Liquid metal proven to be cheap and efficient CO2 converter

A global collaboration, led by researchers from UNSW, has shown how liquid gallium can be used to help achieve the important goal of net zero carbon emissions.

The process can be done at room temperature and uses liquid gallium to convert the carbon dioxide into oxygen and a high-value solid carbon product that can later be used in batteries, or in construction, or aircraft manufacturing.

A team from the School of Chemical Engineering, led by Professor Kourosh Kalantar-Zadeh, worked in collaboration with researchers at University of California, Los Angeles (UCLA), North Carolina State University, RMIT, University of Melbourne, Queensland University of Technology, and the Australian Synchrotron (ANSTO).

Their findings have been published in the Advanced Materials journal and Professor Kalantar-Zadeh and his team say the new technology has the potential to be used in a wide variety of ways to significantly reduce the levels of greenhouse gases in the atmosphere.

“We see very strong industrial applications with regards to decarbonisation. This technology offers an unprecedent process for capturing and converting CO2 at an exceptionally competitive cost,” said Junma Tang, the first author of the paper.

“The applications could be in cars to convert polluting exhaust gases, or even at a much larger scale at industrial sites where CO2 emissions could be immediately captured and processed using this technology.

“We have already scaled this system up to two-and-a-half litres dimensions, which can deal with around 0.1 litre of CO2 per minute. And we’ve tested that running continuously for a whole month and the efficiency of the system did not degrade.”

The newly discovered process dissolves captured CO2 gas into a solvent around nanoparticles of gallium, which exist in liquid state above 30°C.

The reactor also contains nano-sized solid silver rods that are the key to generating the triboelectrochemical reactions that take place once mechanical energy (e.g. stirring/mixing) is introduced. 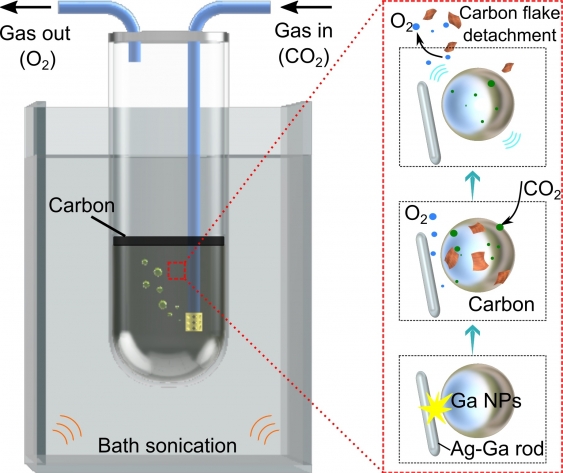 UNSW researchers have helped show how carbon dioxide can be broken down cheaply and efficiently via a process that dissolves captured CO2 gas into a solvent around nanoparticles of gallium.

A triboelectrochemical reaction occurs in solid–liquid interfaces due to friction between the two surfaces, with an electric field also created that sparks a chemical reaction.

The reactions break the carbon dioxide into oxygen gas, as well as carbonaceous sheets which ‘float’ to the surface of the container due to differences in density and can therefore be easily extracted.

In their paper, the research team show a 92 per cent efficiency in converting a tonne of CO2 as described, using a low energy input. They estimate it equates to a cost of around $100 per tonne of CO2 (when the input gas pressure is held at several times above the atmospheric pressure).

In order to commercialise the research, a spin-out company called LM Plus has been established with the support of UNSW’s Knowledge Exchange – a program that helps transform research discoveries into successful innovations to benefit society, along with seed investment from Uniseed.

UNSW has become a shareholder as part of a license agreement with the company. 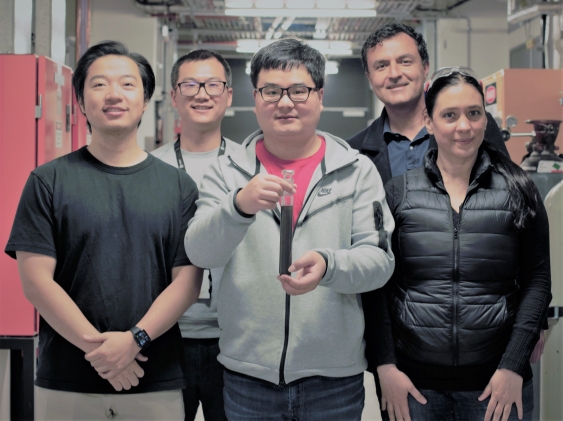 “This is a very green process which also produces a high-value carbonaceous sheet which can then be sold and used to make electrodes in batteries, or for carbon fibre materials that are used in high-performance products like aircraft, racing cars, and luxury vehicles,” said Paul Butler, Uniseed’s Investment Manager and director of LM Plus.

“What we are working towards now is to raise funds to build a larger size proof-of-concept for this system to work within a 40-foot container –the size of a truck trailer – that could ultimately help industrial sites immediately capture any CO2 emissions and convert them.”

LM Plus hopes to be able to build that much larger system within 15 months and is already in talks with potential commercial partners about other ways of implementing the new technology.