Self-healing 3D printed plastic can repair itself... using only light

Research by UNSW academics shows that special treatment of liquid resin used in 3D printing can cause the material to mend itself if it becomes damaged. 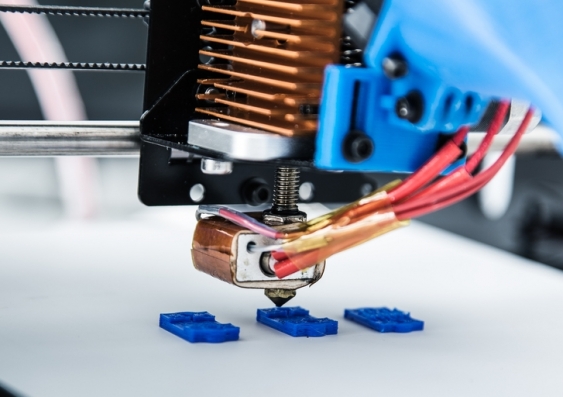 UNSW engineers have demonstrated a way to help 3D printed plastic heal itself at room temperature using only lights.

Professor Cyrille Boyer and his team, Dr Nathaniel Corrigan and Mr Michael Zhang, in the UNSW School of Chemical Engineering have shown that the addition of “special powder” to the liquid resin used in the printing process can later assist with making quick and easy repairs should the material break.

This can be done very simply by shining standard LED lights on the printed plastic for around one hour which causes a chemical reaction and fusion of the two broken pieces.

The entire process actually makes the repaired plastic even stronger than it was before it was damaged, and it is hoped that further development and commercialisation of the technique will help to reduce chemical waste in the future.

That is because broken plastic parts would not need to be discarded, or even recycled, and could be mended simply even when remaining embedded in a component including many other materials.

The results of the team’s research have now been published in the journal Angewandte Chemie International Edition.

“In many places where you use a polymer material, you can use this technology. So, if a component fails, you can repair the material without having to throw it away,” said Dr Corrigan.

“There is an obvious environmental benefit because you're not having to re-synthesize a brand-new material every time it gets broken. We are increasing the lifespan of these materials, which is going to reduce plastic waste.”

The powdered additive the UNSW team use is a trithiocarbonate, known as a reversible addition fragmentation chain transfer (RAFT) agent which was originally developed by CSIRO. The RAFT agent enables rearrangement of the nanoscopic network of elements that make up the material and allows the broken pieces to be fused.

This occurs within approximately 30 minutes when UV LED lights are shone directly onto the broken plastic, with full healing taking place after roughly one hour. 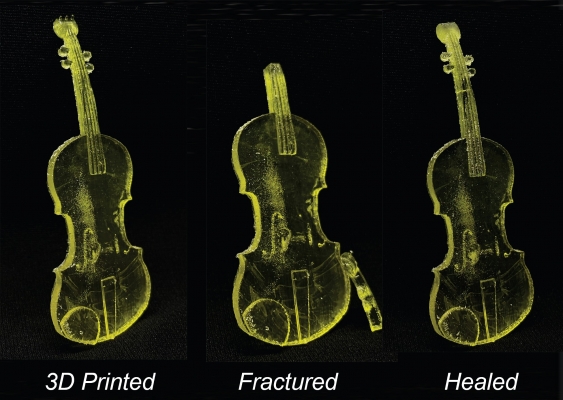 Researchers at UNSW have shown how 3D printed items treated with a trithiocarbonate, such as this violin, can self-heal when placed under UV light. Photo supplied

Experiments, including on a 3D printed violin, show that the self-repaired plastic’s strength is fully recovered compared to its original unbroken state.   The team said commercialisation of the process is possible given the simplification and speed of their system compared to existing ways of repairing broken 3D printed materials.

“There are other processes that do this, but they rely on thermal chemistry to repair the material and typically it takes around 24 hours and multiple heating cycles to achieve the same type of result,” Dr Corrigan said.

“Another restriction to that is that you need an oven which is heated to high temperature and you obviously cannot repair the plastic material in situ – you would need to disassemble it from the component first which adds a level of complexity and delay.

“With our system, you can leave the broken plastic in place and shine the light on the entire component. Only the additives at the surface of the material are affected, so it’s easier and also speeds up the entire process.”

Professor Boyer says the new technology could potentially be used in a range of applications where advanced 3D printed materials are currently used in high-tech specialised components.

These include wearable electronics, sensors, and even some shoe manufacturing.