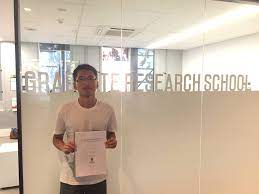 Congratulations to CCRC PhD Jiawei Bao, awarded the Australian Meterological and Oceanographic Society's (AMOS) Uwe Radok Award is for the best PhD thesis in the AMOS fields of oceanography, glaciology or climatology, awarded in Australia. It honours the contributions of Dr Uwe Radok who was one of Australia’s pioneers in meteorological and glaciological research. He was Head of the Department of Meteorology at the University of Melbourne from 1960 to 1977 and played a leading role in the development of Australian Antarctic meteorology and glaciology.

Jiawei's thesis titled “Understanding extreme precipitation and its links with convective organisation” used observations and regional model simulations to explore how extreme precipitation changes in response to warming. His research found flawed assumptions in a commonly used method to explore correlations between temperature and rainfall characteristics. This work has been published in Nature Climate Change and has currently received more than 100 citations. Jaiwei also showed that changes in extreme rainfall are related to the degree of organisation of convection in work published in JAMES that was given an editor’s highlight. Jaiwei was supervised by Steven Sherwood and Lisa Alexander.