A UNSW PhD candidate has led the mapping of the floral emblem of NSW, the waratah. 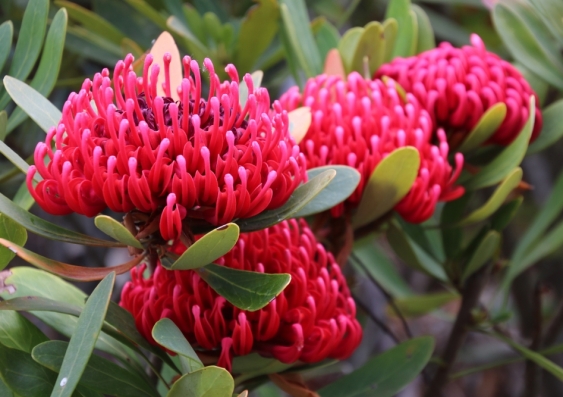 Scientists led by UNSW have pieced together the complex genetic puzzle of the floral emblem of New South Wales, the iconic Australian waratah.

The team of researchers led by Stephanie Chen, a PhD candidate from the Australian Institute of Botanical Science and at UNSW's School of Biotechnology and Biomolecular Sciences, have assembled the complete genome of the Telopea speciosissima for the first time, further bolstering international flora conservation efforts.

Their findings have been published in the journal Molecular Ecology Resources today.

All living things have a genome, which is an organism’s complete set of genetic information, consisting of DNA.

Ms Chen said sequencing a genome was like putting together a puzzle without a picture on the box.

“Imagine you’re putting together a puzzle and it has billions and billions of pieces – with the help of three different sequencing technologies, we’ve been able to link all the pieces that are the bits of DNA together, ultimately revealing the puzzle,” she said.

“By mapping genomes, we gain a better understanding of the natural world. Understanding the genetic make-up of the waratah will give us better insight into its evolution and environmental adaption, ultimately helping us better conserve it, as well as inform breeding efforts.”

Endemic to NSW, the waratah has been the floral emblem of the state since 1962 and was one of the first Australian plant species collected for cultivation in Europe.

Despite its cultural, commercial and ecological significance, there was no reference genome for the waratah and few within its Proteaceae family of more than 1500 species, with genetic studies typically focussed on species of agricultural importance.

In a major coup for plant science and conservation, the waratah reference genome is the first to come out of the Genomics for Australian Plants Initiative, a project funded by Bioplatforms Australia and partner organisations in 2018 to further genomic research on Australian native plants, involving researchers from herbariums and Botanic Gardens across the country. 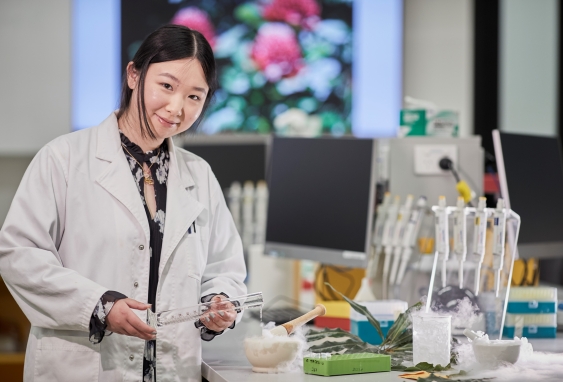 Researchers took leaf samples from a plant growing naturally in a population on land belonging to the Blue Mountains Botanic Garden Mount Tomah before the summer bushfires of 2019/2020.

Ms Chen said the team had planned to return to the site when the plant was flowering to collect a specimen and also needed some more young leaves for DNA extraction but “weren’t counting on the possibility of it burning”.

“That was a bit of a spanner in the works, but we waited for it to resprout and lucky it did. Waratahs can regenerate from their lignotuber and fire is important in their lifecycle,” she said.

The reference genome individual has been propagated at the Blue Mountains Botanic Garden Mount Tomah and will now become part of the garden’s living collection.

Dr Richard Edwards, Senior Lecturer in Genomics and Bioinformatics at UNSW's School of Biotechnology and Biomolecular Sciences, said a chromosome-level assembly allowed scientists to study evolution at a whole other level.

“Complex organisms, like plants and animals, package up their DNA in multiple chromosomes. Not only have we sequenced the genome, we’ve been able to reconstruct the bulk of the waratah’s eleven chromosomes. This is a bit like solving eleven jigsaws simultaneously, when all the pieces could belong to any picture,” Dr Edwards said.

“The large-scale changes captured could be particularly important for understanding how waratahs have evolved into different species, or when and where they might be able to form fertile hybrids.”

Evolutionary and computational biologist, Dr Jason Bragg from the Australian Institute of Botanical Science, said the team’s work would serve as an important platform for evolutionary genomics and the conservation of Australian flora.

“When we have a reference genome it’s our opportunity to try and see further and learn new things. Hopefully developing this amazing resource for this one awesome species gives us the opportunity to inform the decisions we make for other species, because it becomes a model.”

The Telopea speciosissima reference genome and research will feature in a foyer display at the new National Herbarium of NSW when it opens at the Australian Botanic Garden Mount Annan next year.

Chief Executive of the Royal Botanic Gardens and Domain Trust and the Australian Institute of Botanical Science, Denise Ora, said the work was a testament to the incredible research taking place at the Institute every day.

“The Australian Institute of Botanical Science was created to further scientific research, conservation and education efforts not just for Australia but internationally and a project of this significance furthers our position as one the country’s premier botanical research organisations,” Ms Ora said.

“Across all three gardens, in the lab or out in the field our researchers are working hard to ensure Australia’s vital flora is protected and conserved for generations to come.”