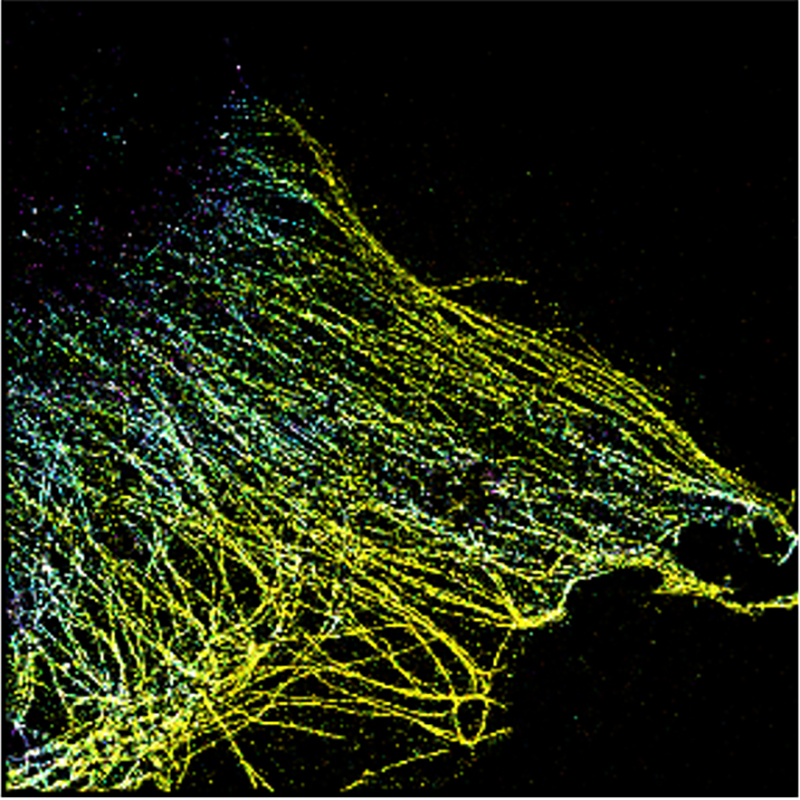 Researchers from UNSW Medicine & Health and UNSW Science have developed a new method to visualise living cells in three-dimensional clarity – at the subnanometre scale – by ‘focus-locking’ on samples while they are being recorded.

Described in Nature Communications, the new focus-locking technique involves growing cell on glass coverslips with specially 3D-printed subnanometre particles called ‘fiducials’, which act as markers to stabilise or ‘lock’ the microscope as it is recorded.

This technique, used together with the active stabilising microscope developed previously by the team, overcomes current shortcomings of super-resolution imaging, which result in ‘sample drift’ – the accumulation of distortions which ultimately degrade final resolution of images.

Previously, the UNSW team designed a smart microscope using polystyrene beads embedded within sample as guides to help the microscope continuously re-align – up to 12 times per second.

With this technology – reported earlier in Science Advances and Nature Protocols – the researchers were able to push the limits of existing super-resolution fluorescence microscopy.

Now, the team have further extended the capabilities of this technology by replacing polystyrene beads with guide markers – 3D-printed to nanoscale accuracy – to lock the focus to within a nanometre.

As the authors report in Nature Communications, the 3D focus-lock mechanism enables imaging beyond the surface of the cell to provide a 3D view of distinct molecules inside a cell, including living cells.

Being able to control the 3D-architecture and positioning of the guide markers at the nanoscale means that microscopists have greater control of the imaging.

Being able to image the cell volume in high resolution should allow researchers to better observe the internal dynamics of cells, such as the trafficking of signalling proteins (the cell’s communication) in response to encounters with pathogens.

“A major benefit is that we control where the markers are located, ensuring there is one within the field of view, and we can customise them for our purpose,” said team co-lead, Dr Simao Pereira Coelho, who co-led the research at the EMBL Australia Node in Single Molecule Science in the UNSW School of Medical Sciences, and is currently at Instituto Gulbenkian de Ciência in Portugal.

“While direct laser writing is becoming very popular, we have coupled it with single-molecule imaging for the first time. Other fabrication techniques have not been able to provide this level of detail and accuracy,” Dr Pereira Coelho said.

“This represents an accuracy that is better than the localisation precision of any previously reported single-molecule method to date,” said the late Scientia Professor Katharina Gaus, who led UNSW’s EMBL Australia Node in Single Molecule Science and co-led this research team.

“This solution to a fundamental imaging problem bridges the gap between high-resolution and penetration depth that can be used for imaging of living cells.”

Prof. Gaus sadly passed away before the study was published and Prof. Justin Gooding from UNSW Science’s School of Chemistry and the Australian Centre of NanoMedicine took on the role as senior author.