Special Sunswift spark for Holden and her crews 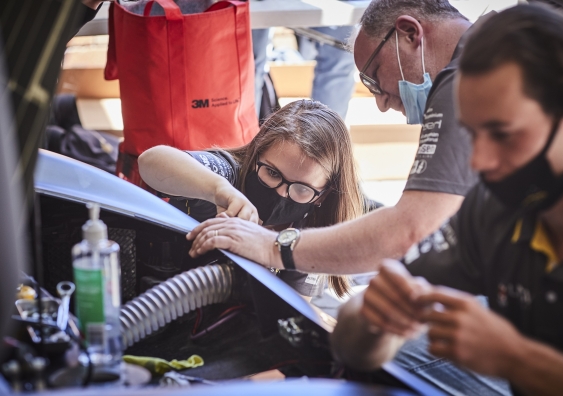 COVID-19 may have put a spanner in the works for Sunswift Racing’s dreams of breaking world records this summer, but without it they may never have had their inspirational team manager Andrea Holden.

Holden, currently studying for a bachelor's degree in Mechanical Engineering at UNSW, heads up the student team which has been designing and building the newest Sunswift solar powered car in the midst of a global pandemic.

Sunswift Racing, run by Red Bull F1’s former Head of Operations, Professor of Practice Richard Hopkins, celebrated its 25th anniversary in 2021 and the team hoped this latest car would be able to regain the Guinness World Record for the fastest pure solar powered vehicle, which currently stands at 91.332km/h.

They also planned an attempt at an FIA (Fédération Internationale de l’Automobile) world record for speed recorded over a 500km distance, but both ambitions were thwarted as ongoing COVID-19 lockdowns delayed the build.

Holden, as team manager, had to deal with the logistics of organising a group of 45 student engineers while Sydney was shutting down around them. But if COVID-19 hadn’t hit in 2021 she may not have been involved at all.

“I was actually doing a completely different degree, which I maybe didn’t enjoy too much, and had signed up to go on exchange,” she says.

“But because of COVID that got cancelled and I felt then that maybe I didn’t want to stay at university. But I spoke to a few people and explained that I enjoyed managing people, managing teams and that I’d love to be a project manager.

“They suggested I switch to Mechanical Engineering, but also to apply for this position on Sunswift and that’s how it all happened.”

Holden admits it would be a great story if she had family links to the famous Australian car manufacturer she shares her surname with – but in this case it is pure coincidence.

In spite of having no experience in cars or motor racing before her involvement in Sunswift, and even with all the logistical challenges thrown at her, she has loved every minute of helping to build a high-performance solar powered vehicle.

The UNSW student team have had to deal with a range of lockdowns while trying to build Sunswift Racing's seventh car. Photo by Richard Freeman

And Holden believes Sunswift 7, which is now fully built, is set to impress when it is finally put into competitive action.

“I think that this car is significantly better engineered, there's been a lot of thought and critical thinking since the last design,” she says.

“We actually had a blank sheet of paper and were able to design Sunswift 7 from scratch and I think that has also been really beneficial.

“I am really confident we’ll be able to break at least one of those two world records when we finally get the chance to go for them. Our previous cars have actually held those records at one time, so if our engineering is even better with this one then we can get the records back.

“I am very confident we can achieve a lot of great things with this new car.”

Holden is more than delighted with the twist of fate that changed not only her degree, but also the entire focus of her university life.

She believes her involvement in the Sunswift Racing team has given her opportunities that may never have otherwise presented themselves.

That has included attending a Vogue Codes event focused on ‘Empowering Future Female Innovation’, as well as working with a host of partners involved in the Sunswift project such as Audi, Optus and IBM. 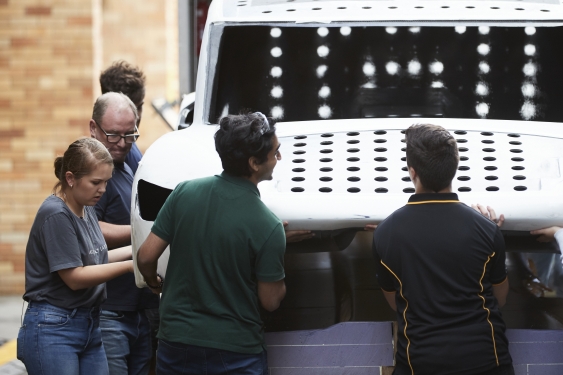 “I fully understand how much I have learnt being involved with Sunswift and really appreciate the opportunities I have had in terms of getting this experience before I’ve even finished university,” Holden says.

“I’ve already been at the top of something pretty important and that takes some people a lot of years to be lucky enough to be in that position. I know there is still so much I have to learn, but going into industry and my career with this behind me will definitely serve me well.

“Being the Sunswift team manager has been challenging and it has been stressful, but the benefits from learning new things far outweighs all of that. It really has been invaluable.

“This is very much real-world experience in terms of dealing with problems, meeting deadlines and working as a team. You take on responsibility and if you don’t do something properly or on time then you affect so many different people.

“Overall, I have learnt that even though I am doing something very specific on Sunswift, the skills I now have are very translatable across different industries. That is really exciting for me and makes me think that the world is my oyster.”