The good news is, pygmy blue whales appear to be thriving in the Indian Ocean. But not-so-good is that climate change may be threatening their food sources. 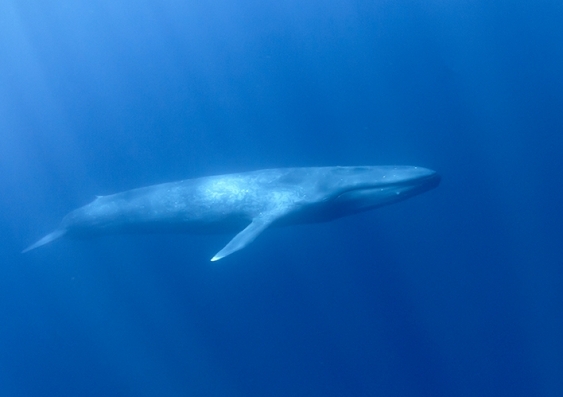 If it weren’t for underwater listening devices set up to monitor nuclear bomb tests, the population of ‘Chagos’ pygmy blue whales discovered only last year in the Indian Ocean would still be unknown to us.

And now researchers from UNSW Sydney have analysed almost two decades of recordings to conclude that the distinctive songs of these pygmy blue whales have increased in frequency over this time.

Since actual sighting of the pygmy blue whales is still extremely rare – despite their 24m length – the researchers cautiously suggest that the findings show stocks of the sub-species could be on the rebound after being hunted to near-extinction in the 20th century.

But while this could be welcome news to scientists and conservationists, the researchers are concerned about the effects of climate change in rising sea-temperatures, with a potential knock-on effect on their main food source, krill.

In a study published recently in the journal Frontiers in Marine Science, UNSW scientists analysed up to 18 years of continuous underwater acoustic recordings from devices known as hydrophones stationed either side of Diego Garcia Island, a militarised atoll governed by the UK and part of the Chagos Archipelago.

An interactive Google map frame showing the location of Diego Garcia Island. Zooming out will reveal it to be right in the middle of the Indian Ocean.

They wanted to find correlations between the presence of Chagos whales and other factors such as sea-surface temperature, food source and changing weather patterns including the El Niño Southern Oscillation (ENSO) and the Indian Ocean Dipole (IOD).

By comparing the whale song frequency recorded by the two sets of hydrophones placed at the northwest of Diego Garcia and at the southeast of the island, they pieced together a pattern of behaviour and migration that correlated with differing levels of food abundance and sea temperature of each area, some 200km apart.

“We used up to 18 years of acoustic recordings of the Chagos whales from the data we got from the UN organisation, CTBTO,” said lead author Lyra Huang, referring to the Comprehensive Nuclear-Test-Ban Treaty Organisation which installed the devices in 2002.

“And we discovered different seasonal patterns of the whales on the west and east side of the island. We found that first of all, the amount of whale songs is increasing over the study period at both sites. Secondly, they are mainly on the south-eastern side from September to November, and they then migrate to the north-western side and stay until February.

“Our analysis shows that these movements are related to environmental factors such as sea surface temperature and food availability.”

View to a krill

Specifically, the researchers found a positive correlation between the amount of chlorophyll-a in the southeast side of the island and increased Chagos whale presence, as well as lower sea-surface temperatures in the time that they appear to favour this area.

According to Professor Tracey Rogers who is a co-author and expert on how mammals overcome the challenges of changing environments, the presence of lots of chlorophyll-a is a potential indicator that there is more food at those times for the whales. This is because high concentrations of chlorophyll-a show that there is an abundance of phytoplankton. And since krill feed on phytoplankton, it makes it an attractive feeding site for whales.

“We see high concentrations of chlorohpyll-a on the south-eastern side of the island which corresponds with times when there are more whale songs recorded there, but no correlation at the north-western side,” Prof. Rogers said.

“This tells us that the whales are most likely feeding on that south-eastern side and then migrating past the western side of the island.

“Our earlier research picked up these same whale songs up as far as Sri Lanka and across as far as the Western Australian coastline. This means these whales migrate across the Indian Ocean, which is really unusual for blue whales as they generally move north and south to and from Antarctica, but these guys are going east to west, and back again.” 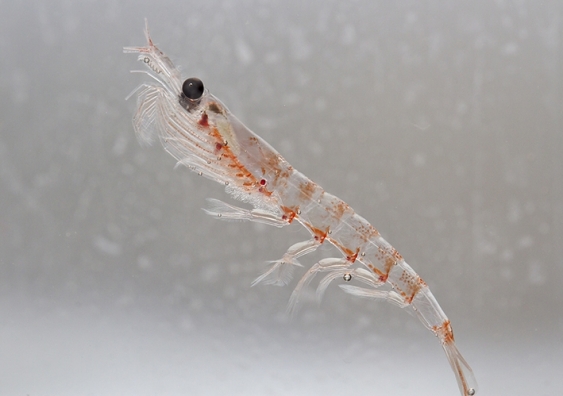 They may be tiny, averaging about 5cm in length, but krill are hugely important in the survival of blue whales. Photo: Shutterstock

The changes in the sea temperature at both sites is also significant, said the researchers. Prof. Rogers said more research is needed to understand what effect warming sea surface temperatures could have on the Chago whales’ population.

“That area of the world, the middle of the Indian Ocean, is seeing some really strong changes in water temperature,” she said.

“So, it'd be really interesting to see how this newly discovered population is going to fare into the future – is that going to be better for them or will it be not as good? But at the moment, things seem to be going really well for them.”

The team also investigated the effects of cyclic weather patterns like El Niño/La Niña and the Indian Ocean Dipole. While ENSO patterns did not appear to be strongly correlated, the IOD phases – where the western part of the Indian Ocean becomes alternately warmer (positive phase) and colder (negative phase) than the eastern part – did appear to have a relationship on whale song frequency.

“During the positive IOD phase, it is cooler in the south-eastern site with potentially more nutrients for the blue whales, and we detected more whale songs here,” Ms Huang said.

Prof. Rogers said the CTBTO will be an invaluable resource when evaluating the health of the Chagos blue whale populations going forward.

“Oceanic conditions in the Indian Ocean are predicted to change under future climate scenarios,” she said.

“As the CTBT Organisation continues to monitor our oceans, listening for unapproved nuclear tests, they continue to collect data that scientists need to understand how warming of the central Indian Ocean waters impacts the Chagos whales and other marine wildlife in the area.”