'Swim between the flags' has been effective, but we need a new message for unpatrolled beaches

Research reveals the reasons why people continue to swim at unpatrolled beaches, despite the warnings. 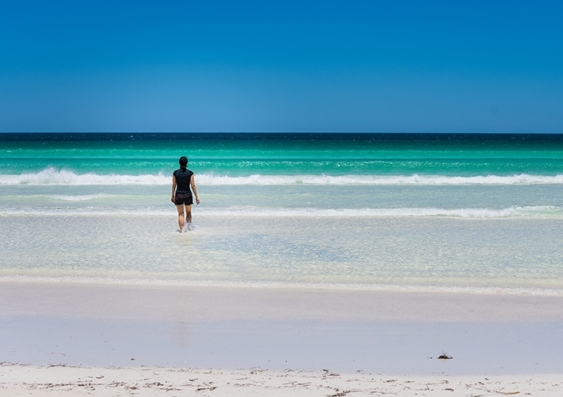 With approximately one in five of NSW’s 721 beaches having lifeguards and surf lifesavers, chances are that thousands of holidaymakers will be swimming at unpatrolled beaches these Christmas holidays.

And while many of us cherish this right to enjoy our coast off the beaten track, statistics paint a sobering picture about the risks of swimming at unpatrolled beaches. Last year, more than 76 per cent of Australia’s 141 coastal drowning deaths occurred more than 1km away from the nearest lifeguard service, or outside patrol times.

UNSW Sydney surf scientist Professor Rob Brander – aka Dr Rip – says that while the ‘swim between the flags’ message has been loud and clear for generations of Aussies, it needs to be augmented with messaging about the risks of swimming at unmonitored beaches if we’re to reduce the numbers of people drowning.

“There’s no doubting that the ‘swim between the flags’ message is effective on patrolled beaches,” Prof. Brander says.

“But there are lots of people going to beaches with no flags, and no matter what we do, they’re going to go to these beaches, so we have to give them something more.”

Why people swim at unpatrolled beaches

“Most of these people we surveyed were infrequent beachgoers, so they only go to the beach a handful of times a year,” Prof. Brander says.

“They had poor rip current identification skills, and most didn’t observe the safety signage that was there. But 86 per cent of all respondents intended to go swimming at one of these beaches, despite being aware there were no lifeguards.”

The main reasons that people chose to swim at beaches with no flags were varied, ranging from being protected by the wind, to finding out about it on social media to being chosen because of its natural beauty.

But there were two reasons that people gave that stood out almost universally. First, the beach was the closest beach to their holiday accommodation, and second, people wanted to find a beach away from the crowds.

“I think what these findings show is that people aren’t going to jump in a car and drive 25 kilometres to the nearest patrolled beach, they’re going to this beach they’ve chosen because it’s close to accommodation and it’s quiet.

“So I think we need to move beyond the ‘swim between the flags’ message and accept that people are always going to wind up at unpatrolled beaches.” 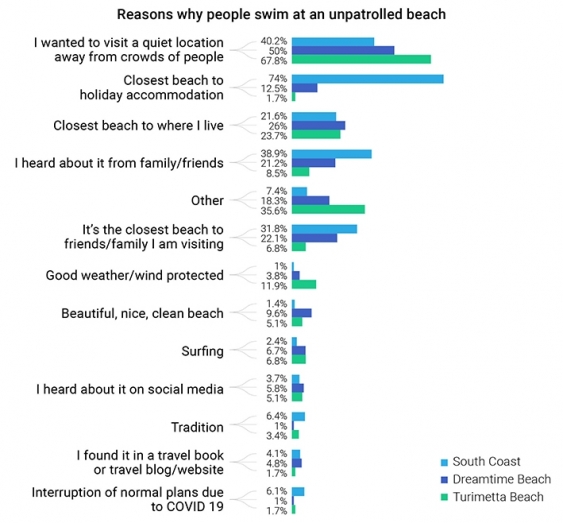 How do you stay safe when swimming at unpatrolled beaches?

Prof. Brander points to a campaign that Surf Life Saving Australia (SLSA) launched in 2018 to address swimming at unpatrolled beaches or outside hours that beaches are patrolled.

The “Think Line” campaign encouraged beachgoers to draw a line in the sand to Stop, Look and Plan before swimming at the beach.

“By taking a moment to STOP and check for rips, LOOK for other dangers and hazards and PLAN to be safe and what to do if something goes wrong can make the difference between a great day and tragedy.”

Surf Life Saving Australia recognises the fact that with approximately 52,000km of coastline and almost 12,000 beaches nationally it is essential for those visiting the coast to be aware of potential hazards. If you can’t swim at a patrolled beach it is essential to minimise risk by knowing where you are going, what your limitations are and what to do in case of an emergency. With an average of 122 coastal drowning deaths and 11,000 rescues each year every visitor to the coast has a role to play in staying safe. The Think Line campaign is about empowering all beach visitors to take three simple steps to being safe.

​1. Where possible, swim at a patrolled beach, between the red and yellow flags

2. Regardless of whether you’re at a patrolled or unpatrolled beach, adopt a STOP, LOOK, PLAN approach

3. Wear a lifejacket if boating, rock fishing or on watercraft

4. Check weather conditions before heading out

5. Avoid alcohol and drugs when on or around water

6.  Supervise children at all times on, in and around water